DEAD CROSS debut album was released one year ago! 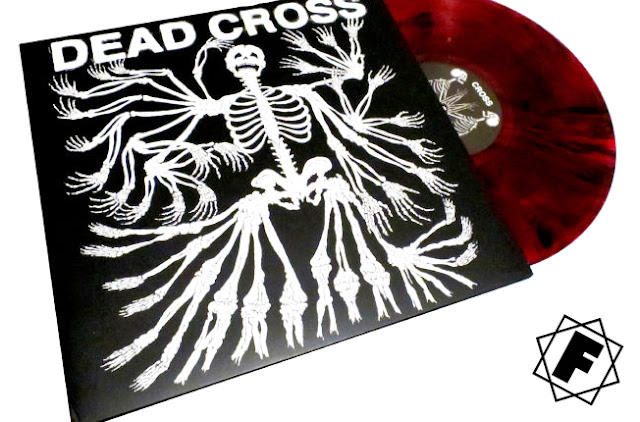 “To me, it is a traditional hardcore record. It is very pointed, direct and visceral. Like, I wasn’t going to play keyboards, add samples or any kind of orchestration. It was like, ‘Yo, just go for it.’ In some ways, it reminded me of stuff that we had collectively all grown up with and loved when we were like teenagers – bands like the Accüsed, Deep Wound or Siege, stuff that was just brutal, uncompromising and right to the point. I was listening to all those bands again before this came to be, so it was already back infused in my blood. And now I got a chance to do a pencil-in-your-eye record.” - Mike Patton

"This album carries so much anger and frustration. You hear it in my drumming. It was the perfect birth of a hardcore album. It’s one of the most brutal albums I’ve ever done.” - Dave Lombardo

In this case, bringing people with proven track records together has resulted in a stellar release. At its heart, Dead Cross is a hardcore record, albeit a hexagonal-shaped one in which the angular complexity inherent to Justin and Mike Crain’s day gigs tightly jigsaw with Dave’s precarious precision. And then there’s Patton, who can write catchy vocal lines to a glass factory implosion, making the jagged lurch of Seizure And Desist and the rickety doom punk of Obedience School flow as smooth as silk whilst sounding the angriest he has in years.

This is a weird album by a weird combination of musicians. In a sense the sound is fully formed, yet it definitely has the feeling of coming together pretty quickly in the live room. Given the amount of single-tracked MacBook Metal and “technicolor” Pitchfork metal out there these days, that makes this a fun breath of fresh air.

The self-titled debut from Dead Cross is a hyper-kinetic joyride which will leave a huge shit-eating grin on your face. The pace and delivery of the music on this album feels manic, yet you’ll feel the deliberate focus and intent with every song. Dead Cross have created an album that stimulates and invigorates by way of a sharp shot of adrenaline to the Reticular Formation of the brain.

The addition of Mike Patton to this project can also not be overstated. Lombardo and Patton work very well together as demonstrated in Fantômas. Those familiar with the man know that Patton has very far from a traditional hardcore voice but these same familiar folks should also know that there's nothing traditional in anything the man does. But here, his voice serves the music fantastically well while not losing a shred of what's always made Patton's voice so unique. Cases in point being tracks like "Obedience School" and "Shillelagh". Both are the perfect amalgam of the punch-in-the-face hardcore-style vocals combined with Patton's harmonic range. The difference being for instance in a band like Faith No More, Patton demonstrated the versatility of his voice with each song, but with Dead Cross, he's making that style switch with each line delivered. It truly is a sound to behold.

Patton fans will similarly rejoice in these spastically ferocious moments, accentuated with an abundance of deeply layered vocal harmonies and one of the most impressive tonal ranges in the business. Consistent with his unmistakable lyrical approach, Patton trudges his listeners through an onslaught of nightmarish imagery, pitch-black humor, and a disgusting amount of references to bodily fluid. Indeed, much of this album delivers a quintessential “Patton-esque” experience, though his performance maintains an impressive freshness throughout.

Fortunately for all parties involved, Dead Cross makes fantastic use of members of Faith No More, Slayer (former) and Retox. Just reading those names should be comfort enough, but if you’ve got to have the proof, give ‘Grave Slave’ a spin and you’ll soon be reminded that Mike Patton retained some of that Dillinger Escape Plan madness from his stint on the Irony Is a Dead Scene EP.

Too often supergroups sound good on paper but end up being an excuse for normally great artists to ease off the gas in the hope that their high profile band mates will pick up the slack. Not so with Dead Cross. Mike Patton delivers in a range of vocal styles we haven’t seen since Faith No More’s Angel Dust over raging hardcore courtesy of Slayer’s Dave Lombardo and Retox’s Justin Pearson and Michael Crain. It’s furious but not relentless, as Patton’s delivery injects melody, humour and brutality in equal doses, making for an album that never gets stale. If you were expecting an arty vanity project, you’ll be disappointed – this is a motherfucker of a hardcore punk record. 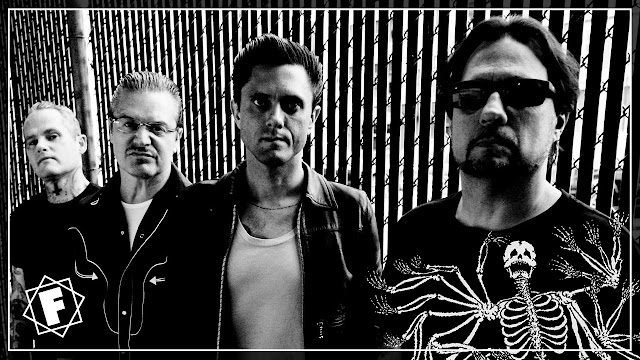 
You can’t help but question whether or not you would have picked up this album of a random band, if you didn’t already know who the members were. I certainly would have hoped so. Set aside the preceding reputations of everyone in Dead Cross, as difficult as that may be – you have an outstanding debut album full of raw, hardcore style metal. I hope this isn’t just a one-off, as I would love to hear more music from not only the Lombardo/Patton factor, but this current collaboration as well.

The band's sound falls somewhere along the lines of old school hardcore bands like Dead Kennedys or Bad Brains, while creating an entirely unique tone that plays off of the strengths of their members. Patton's signature strange voice is put on full display on songs such as "Grave Slave" or "Shillelagh" as he belts out harsh, manic shrieks intertwined with operatic backing vocals. The vocalist's approach comes across like a revisit to his days collaborating with the Dillinger Escape Plan, but with a more direct and vicious attack.

Patton is flexing his vocal cords here right across his bizarre and wonderful range here, and it’s this that sets Dead Cross apart from a genre that found its niche in the 1980s and hasn’t ventured out much since then – his screams and shouts are impressive enough, but it’s the sudden and frequent bursts of harmony that make this record feel that it has something new and exciting to offer. ‘Shilleagh’ for example runs the full repertoire, sometimes simultaneously but never uncomfortably.

At times slithering through tracks, while screaming his head off at others with absurdist lyrics such as “I took a pee and it came out red, I took a dump and it came out dead,” his level of pure enjoyment is infectious.

In a lot of ways, this record feels like a solid throwback too awesome hardcore and thrash music. The beginning portion really honors that sound, coming out with the constant beat downs and hysteric rhythm that packs brutality. The second half of the album is a wild treat that keeps some of that sound from earlier, but spins it in wonderfully cool directions. Weird sinister tones, sporadic guitar work, and wild vocalization keep the material at an all-time high energy. Everyone in Dead Cross plays to their best, and have crafted a thrilling work. This self-titled LP is an incredible start for the band, and a promising sign of how they may grow.

As anyone familiar with the thin alt-rock gruel served up by Mastodon/At the Drive-In/Queens of the Stone Age team-up Gone is Gone will attest, the rock supergroup is often something that seems a better idea in theory than in practice. Which makes the self-titled debut from Dead Cross a rare and impressive exception. It reunites Slayer drummer Dave Lombardo with Faith No More wild man Mike Patton (the two previously appeared together in oddball metal outfit Fantômas) for a ferocious burst of inventive, hardcore punk that never stays still long enough to get predictable. Retox guitarist Mike Crain’s squalling, shreddy riffs nod smartly both to 80s Bay Area punk and the more contemporary mathcore of the Dillinger Escape Plan and Botch, while Patton, sounding more energised than he has in years, puts his elasticated vocals to good use, barking, yelping and cooing his way through the sludgy Gag Reflex, the pulverising crust punk of Idiopathic and even a surprising cover of Bauhaus’s post-punk classic Bela Lugosi’s Dead. The result is an album that sounds as if it was a blast to make and one that’s immensely enjoyable to listen to.

To hear Patton and Lombardo celebrate their fifties with their most visceral work yet is absolute magic. And what a bucket list moment for Pearson and Crain to bookend these two pillars of metal evolution, a dream come true that can be enjoyed vicariously by anyone who ever wished to jam with their heroes. It’s albums like Dead Cross that keeps hardcore so exciting for those of us beyond its tight-knit community.

Better put on your baddest mood: these tight-as-a-rat’s-ass, seizure-inducing 28 minutes are not smooth. Hell no. Crude. Rude. Lewd. With no lube. One thing is for sure: This is Dead Cross’ soundtrack to the upcoming Rapture.

The players in this group fit together like a bizarre music puzzle coming together to make one chaotic, beautiful music masterpiece.