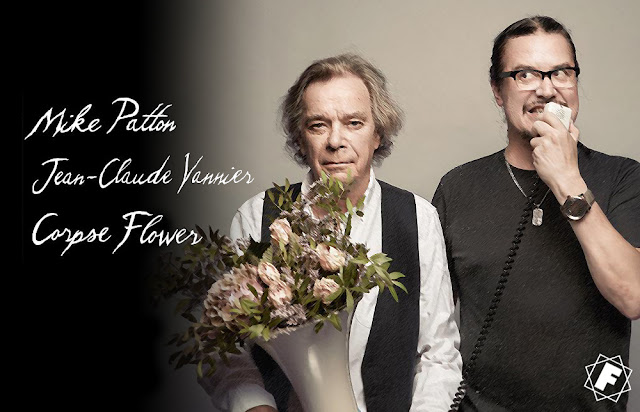 We first heard of a collaboration between Patton and Vannier in mid 2017 when Patton told Rolling Stone,


“[It's] Very, very lush,” Patton said he’s “doing a lot of crooning in different languages, and the instrumentation is all over the map.” And when asked if the album will it contain Gainsbourg’s signature sexy lyrics “There are plenty of those, don’t worry, they just don’t sound so sexy in English.”

Of over the course of the twelve tracks we experience a side to Patton that we rarely hear, an apparent vulnerability coupled with his twisted humour. His vocal styles are somewhat restrained and we hear deep tones of his voice, he often speaks rather than singing. It's a change to the range and extreme voices he uses in projects such as Dead Cross or even Faith No More. This is a mature, thoughtful Patton that we welcome.

His voice coupled with Vannier's expert and exquisite compositions are a perfect marriage which makes for wonderful music. Highlights include Ballade C.3.3, Browning and A Schoolgirl's Day.

Cinematic, dreamlike, cool and often unverving...Not a typical Patton release (but then what is), Corpse Flower continues to prove that Patton is unpredictable, and can turn his hand to pretty much anything with outstanding results.

“He's got the absolute technique and delicacy of a classical composer, and yet he's well-versed in jazz and rock and he likes to fuck shit up. And he does it in a really effortless way. It doesn't sound like cut and paste, it doesn't sound like postmodern bullshit, it's actually composed that way. It's with intent, and that's why he's really, really special. Not a lot of people can do that.”

“I wanted it to feel like this global nomad going to all these different places and using different languages, I mean there's all sorts of shit on there, man. I kind of threw out the idea that it should sound like global nomad chaos. But I didn’t want it to sound like it's from France or fucking here. I wanted it to sound like a world with no borders. Easier said than done and I'm not sure it came out like that, but that was what was in my head and he loved it. Like a world music record without a world.”

Also Patton spoke with Bandcamp about the album.

“Making great music is sometimes like being in a torture chamber. You have to accept the pain. Ultimately, it’s not about you. It’s about how the music can be best served,”

Patton on the title,

“They’re amazing things, these plants that are so beautiful but have these aromatics that attract things to kill. I thought it was a really good theme to explore with this music, because that’s kind of what this record is: There’s a lot of beauty and a lot of horror. It’s really highbrow and lowbrow at the same time.”

The fact that legendary rock iconoclasts Mike Patton and Jean-Claude Vannier have made an album together in this way whilst enjoying a long distance bromance seems more difficult to get one’s head around somehow. Patton and Vannier not only have the Atlantic between them, but they seem to have come from across the decades, and from different musical cultures and milieus. They are two titans of their arcane domains for sure, but the undergrounds they rule over are within very different terrains.

It’s a surprisingly natural fit, as Patton’s smoky growls really aren’t that far removed Gainsbourg’s nonchalant, semi-spoken missives. There’s an almost romantic sense of widescreen drama, within which Chansons D’Amour is a genuine highlight, with Patton sounding oddly like Tony Stark at the end of his tether over lilting strings and haunted piano. Corpse Flower drips with sleazy saloon decadence, and is occasionally a bit too smooth for its own good. But it's a worthy stopover for two of the more twisted snakes in the reptile house.

The key to understanding much of Corpse Flower is in appreciating the intentionally off-kilter juxtaposition of Patton and Vannier’s musical arrangements with their accompanying lyrical wit; it’s certainly strange and unusual, and there are absolutely no barriers for these exceptional artists. With poetic lyrics that are never extraneously verbose, but often a bit wacky and always open to interpretation, Corpse Flower is an unsettling and freakishly chill adventure through a series of filmic vignettes that always harness the unexpected. Those without appreciation for the Avant-garde or a good sense of humor need not apply! For this, Cryptic Rock give Mike Patton and Jean-Claude Vannier’s Corpse Flower 5 of 5 stars.

On the one hand, it’s questionable tripe from creepy old men raging against the dying of the light; on the other, it comes off as a pornographic text of premeditated, nothing-left-to-lose hideousness, openly goading the listener to hate it. To listen feels somehow masochistic, which is to say, gratifying on some deep, primal level.

While the record probably is best suited for listening in its entirety and isn't exactly geared towards a specific type of music fan, Corpse Flower has a dynamic sound that is interesting for anyone. The record is another example of the masterful musicianship of Patton and showcases Vannier's capabilities in crafting perfectly balanced pieces of music.