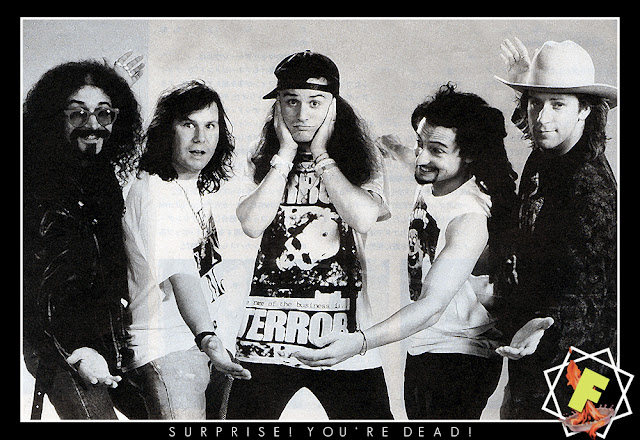 'Bring out your dead!'

The famous words called out by Eric Idle as he trundles through a medieval village leading a cart piled high with disease ridden cadavers in Monty Python’s The Holy Grail. Surely Faith No More had this classic scene in mind when they added the chime of bells to the intro of Surprise! You're Dead!

Track four from The Real Thing was voted FNM’s second heaviest song by those thrash specialists Metal Hammer, losing out to Jizzlobber. It certainly has all the elements required to sit nicely amongst 80's hair terror music, however the song has nuances that no other could capture and a wonderfully comic approach that only true fans could appreciate.

"Surprise! You’re Dead! is Jim’s. It had been around for him, note-by-note on a demo,a long time before. It’s a super-good blast of energy." - Mike Bordin 2017

"It was pretty much Jim's tune. Basically, I think Jim's dead serious about it - he's a twisted guy. He's a self-parody and himself at the same time. and he gives his music that feeling." - Bill Gould 1990

Surprise! You're Dead! was one of the first songs that Jim Martin and Mike Bordin began work on in the summer of 1988, however the genesis of the song was much earlier. The riffs were written during jamming sessions between Jim and his childhood friend the late Cliff Burton.

"We threw things into a huge, vicious turmoil. We'd make recordings of jams like that, and to make up a set we'd just take various portions of jams and use 'em, it was a beautiful thing. A lot of my ideas came from, and still come from, those jam sessions. If I wanna write music these days, I'll jam, record the whole thing and pick out certain riffs. I think Cliff did the same thing, he'd pick out sections he liked for his songs. There's some Metallica songs that were born from those jam sessions, such as 'For Whom The Bell Tolls' and obviously Faith No More songs such as 'Surprise! You're Dead'." - Jim Martin 1994

Originally called The Sailor Song, the new title was recycled from a film directed by Roddy Bottum during his time studyng at film school.

"I made a short film called Pets in college. Billy and Mike Bordin helped with the soundtrack for the film. It was about a couple with pets in their apartment in compromising situations, and they were trying to adopt a child. It was a story of a dysfunctional family in modern America."

The metallic muscle of guitar cranked up to eleven on this song illustrates clearly Jim’s skills as a songwriter and musician. Puffy's beats are punchy and often brutal yet present a certain bounce which reflects his African percussion background.
Often in thrash metal the bass is lost as it simply follows the guitar (one exception to the rule would be Cliff Burton whose talents gave him a staring role in early Metallica), in this song Bill Gould has a warmer tone as his bass lines mirror the bounce within the rhythm. It wasn’t until later albums that Roddy found his place within the heavier FNM songs so is very absent here.

The music may be an ear bashing tribute to Satan’s jukebox but the vocals offer us much more. There’s no doubt that Mike Patton has metal in his blood, as a kid he and Trevor Dunn would hang around the railroad tracks rocking out.

"Mike and I basically rode the crest of metal all the way through the '80s. We were big metal-heads. I remember us walking around with a boom-box by the river listening to the first Slayer record after it came out. It still blows my mind that 20 years later we were playing in a band with Dave Lombardo." - Trevor Dunn 2013

Initially when these two adolescents joined up with Trey Spruance they were jamming on Metallica and Megadeth songs. Eventually with the birth of Mr. Bungle came their first recording Raging Wrath Of The Easter Bunny. On this first demo Patton growls throaty vocals that were more metal than Tony Iommi's underpants. It was of course this performance that impressed Jim Martin enough to get him an audition with FNM.

"He [Trey] gives me the tape and we play it later doing whatever we were doing, and Jim loves it, because it sounds like Slayer, it sounds like speed metal with death growls and all this crazy stuff. And I'll never forget it; Jim turns around and says to us, 'This guy has got to be this giant fat guy with all the power that he's got in his voice!' And time goes by, and then when we were looking for a new singer, Jim was like, 'Let's get that big fat guy from Mr. Bungle!'" - Mike Bordin 2015

Oddly enough Surprise! You’re Dead! was one of four early demos sent to the record executives at Slash to reveal Patton’s talents and the band’s new musical direction.

While the lyrics talk of murderous undoings, torture and destruction it's Patton's delivery that makes us believe he is playing a character rather than giving us his best Dave Mustaine.

"Yeah, read the lyrics. They're really ridiculous. The song kinda sounded cartoonish so I wrote that kind of lyric to it. Hey, I listen to a lot of Slayer." - Mike Patton 1990

"The lyrics of that song came after the music, and even after us calling it “Surprise! You’re Dead!” for some reason, and so he went with that, which is amazing. He was willing to take a chance, willing to go with it wherever." - Mike Bordin 2017

Although Patton has never cared to reveal a true insight into the meaning, in keeping with the perversity of other lyrics on the record he did refer to necrophilia.
Patton was a typical American sicko masquerading as a wholesome fresh-faced youth.

"Ok. I admit it. Necrophilia isn't definitely a fascination. I haven't been put in a situation where I could explore it, yet, but Karen Greenley is someone who interests me. She was this girl who went around mortuaries and got jobs as a caretaker. She'd take the nightshift and start having fun with corpses. She got caught but I think she got off by just paying a fine or something." - Mike Patton 1990

When the band finally reached recording stages producer Matt Wallace and Big Jim wanted the perfect guitar tone to compliment the song. For help they visited Rick Rubin and David Bianco who were working with Wolfsbane at Sound City studios in Los Angeles. Also Jim spent time with his old buddy James Hetfield who had just finished recording ...And Justice for All.

Those who had seen Gremlins 2: The New Batch will have heard 20 seconds of this song as Surprise! You're Dead! briefly featured. In 1993 FNM released Video Croissant a VHS compilation of their promo clips. Included was Surprise! You're Dead!. The short film was stitched together by Bill from footage captured on a hand held camera during the band's 89/90 tour in Europe and America. As a black and white Patton mouths the lyrics whilst sat in a public toilet we can further understand the irony of the song.

Surprise! You're Dead! is a cartoon version of speed metal's death obsession. Heavy yes, Metal maybe. While Jim may have taken it seriously Patton and the rest of the band surely didn't.