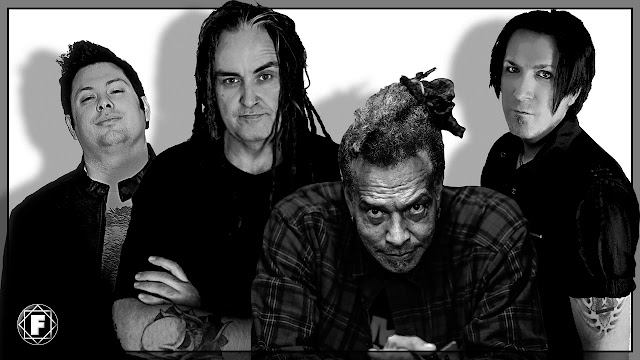 When we reached out to Chris Kniker, the producer behind Primitive Race and their new album Soul Pretender, he asked us which member of the band we would like to interview. We requested to chat with Chris himself as we had already interviewed Chuck Mosley on many occasions.
He responded with 'But Chuck is more fun! I reserve the right to have Chuck interject for comedic relief'. As it turns out it is now a much different interview than it should've been, we spoke to Chris and guitarist Mark Gemini Thwaite about what could be Chuck's last full album. This was Chuck's last recorded release, and in conducting this interview we hope to bring light to an great album, and great tribute to his memory.

When you began to put a band together to produce this second Primitive Race record what attracted you to Chuck?

Chris Kniker: Chuck and I had been friends off and on for 17 years.  I knew with this record I wanted to give a more alternative rock and post-punk vibe.  One of the guys that I thought would be a natural fit was Chuck.  He’s got a style that is distinctly only his.  His croons, mumbles, moans, and screams are great.  He also has this great gravelly sound he conjures up. We were hanging out in July or August of 2016.  I shared some of the rough demos with him.  The next day we went to brunch and I couldn’t believe how excited he was about what we were doing.

Mark Gemini Thwaite: I'd collaborated on quite a few tracks on the debut Primitive Race record which came out in 2015, and Chris approached me asking if I'd be interested in recording some new material for a new PR album with Chuck. We'd probably had the conversation before, but I reiterated what a big fan I was of early Faith No More, in particular the 'Introduce Yourself' album Chuck was on, and also Patton's debut 'The Real Thing' & 'Angel Dust' etc. Jim Martin had been one of my favorite guitarists of the late 80's alt-metal scene, and I got excited at the idea of revisiting a more straight-ahead guitar style and sound, I'm known more as a user of effects and layers of sound with bands such as The Mission, Tricky and Peter Murphy, but I grew up on punk rock and NWOBHM in the early 80s. FNM straddled the metal and alternative scene in a very cool way.


What was it like working with Chuck in the studio?

CK: I only spent one day with him near the end. We were just finishing up and he was cutting final vocal takes.  It was fun.  He was loose by then and knew what he wanted to accomplish.  Earlier in the process it was a little frustrating because he was so humble and self-effacing.  He was owning it!  He just didn’t really know it until those final moments.


Were there plans in place to take this music out on the road?

CK: Not at first. But as things progressed we wanted to play these songs.  In fact, two days before Chuck passed he and I were talking about doing a long weekend in California.  L.A. and S.F. for sure.  It’s a shame…

MGT: Once the songs started to take shape, I started making noises to Chris that we really should play some live shows to promote this record. The debut Primitive Race album had featured numerous singers so getting us in a room and touring was a logistical nightmare and we never got it together, but as this record was the same lineup of Chuck, Chris, Dale Crover, Erie Loch and myself, I felt we could at least play a few shows. And then Chuck passed...


Chuck recorded some material with Matt Wallace, which we hope will be released, however this will possibly be his last full album of music. How does that effect you?

CK: The whole thing is surreal and not in a good way.  It’s heavy to carry that burden.  Chuck was proud of this album and he wanted people to hear it and know he had great performances and clever, intelligent, lyrics to share.  It was almost a redemption for him.  Now he’s not here to see it through.  I have a completely different perspective, he was my friend.  So, talking about him like this…it’s just so hard.

MGT: It's a double-edged sword so to speak.  We're proud to have worked with him on one of his final releases, and obviously honoured, but its bittersweet that much of the attention is because Chuck has now left us way too early. One things for sure, Chuck can be very proud of 'Soul Pretender', as can all of us, and I'm confident it will stand the test of time.


How deeply was Chuck involved in the writing process?

CK: Once he was in he was all in.  The music had largely been all written at that point.  But, he wanted the vocals to really compliment the energy of it.  He flat out told us all that this was the most fun he'd had doing a record and put him in the most creative space since his days in FNM.  That really made me happy.  I’d talk to Erie often and tell him how Chuck was the most excited person about this record.  It was amazing to hear how he thought we were doing something special all the time.  It really drove me to want to keep pushing it.


Where did the album title come from?

CK: Chuck’s lyrics were really kind of dark.  He went in a whole different direction than I think even he expected.  He kept saying things like I don’t know where this is coming from.  The music put him in a different space and he just allowed himself to be bathed in it.  Soul Pretender was just a really cool lyric and it worked so well with how the art concept was coming together.  I told him flat out that it was going to be the name of the album. He liked the idea and we rolled with it.


Stand out tracks on the album are Cry Out and Stepping Stone are there any songs that you are particularly proud of?

CK: All of them really.  It was just such an honest album.  It had soul and I felt like were creating something really organic.  It wasn’t the perfect album.  The songs breathe.  We didn’t go in and over process, quantize, and cut and paste to make it robotic.  As for favorite songs I have to go with Cranial Matter.  I also really enjoy where Stepping Stone starts and then takes the listener to.  It’s not comfortable and I think there’s something really cool about that.

MGT: I also lean towards 'Cranial Matter' when asked to suggest one of the new tracks to someone, also 'Take it All' and 'Bed 6', they all tick all those boxes and has a great vocal and energy from Chuck, great energy from the band as well. I'm also a big Killing Joke fan and enjoyed bringing some of that flavour to some of the epic tracks, such as 'Nothing to Behold' and the epic album closer 'Dancing on the Sun' (which was Chuck’s favourite as well).


Was it simply the musicians involved that encouraged you to move towards guitars based sounds than electronic sounds on this album?

CK: No, it just progressed that way.  Even in making the first record it felt like the highlights were the more straight forward rock songs. I made a conscience decision that we were moving that way.  I wanted something organic, live, not overly polished.  Real drums, loud guitar, gritty vocals.

MGT: Chris made it plain early on that this second PR album was gonna be a step away from industrial and a step towards a heavier rock n roll sound, we had already touched upon it on the first album with my guitars on songs like 'Addict Now', 'Give Up the Ghost' and 'Acceptance of Reality' could totally have slotted into this new album stylistically. Upon hearing the sketch demos, I knew immediately which approach I'd take with the guitars: solid, no nonsense and a nod to those great records by FNM and others from the late 80's & 90s.


It's wonderful for Patton fans that you have brought his world together with Chuck on this record. How did Dale Crover become involved?

CK: When the album was still just an idea floating around in my head I knew it needed live powerful drums to really work. After talking to some other friends about the part I felt like I should go out on a limb.  Dale’s kick, toms, even snare hits can be bigger than life.  I’ve been a Melvins fan since they were on Boner records with my friends the Warlock Pinchers. So, I asked Mark Brooks to ask Dale about it. At the same time, I’m friends with Toshi so I hit him up.  A day or two goes by and Toshi tells me to send over the sessions.  It was awesome! It was fun to link up with that camp again for other reasons as well.  Years ago, I was working on some KMFDM releases and I had Buzz do a remix for them.  To come around and link up again was just cool.


Chuck of course is not here to enjoy the success of Soul Pretender. How do think fans can honour his memory?

CK: The outpouring of love to Pip and family has certainly been wonderful.  I’d like to see it continue.  As for honoring Chuck I think there’s a few ways.  Celebrate him.  He made amazing music…absorb all of it.  Enjoy it and spread his legacy among your friends.  Then learn from his unfortunate mistakes.  We have a horrible opioid problem.  Educate yourself and stay away from that junk.  By legal means or not that stuff is not safe.  If you know someone that’s fighting that demon.  Offer help.  If they decline get them help yourself.  Better to lose a friendship than see someone you love die.