On November 9th 2017 we lost Chuck. Words can not express the devastating loss Faith No More Followers admin feel. Until we can process this, we will reserve any personal comments and express our feelings at a later date. Rest In Peace brother.
Photo | William Lacalmontie  Chuck's family issued a statement on November 10th concerning their loss.


"After a long period of sobriety, Charles Henry Mosley III lost his life, on November 9th, 2017, due to the disease of addiction," Mosley's family wrote in a statement. "We’re sharing the manner in which he passed, in the hopes that it might serve as a warning or wake up call or beacon to anyone else struggling to fight for sobriety. He is survived by long-term partner Pip Logan, two daughters, Erica and Sophie and his grandson Wolfgang Logan Mosley. The family will be accepting donations for funeral expenses."

Faith No More added their own words.


'"It’s with a heavy, heavy heart we acknowledge the passing of our friend and bandmate, Chuck Mosley. He was a reckless and caterwauling force of energy who delivered with conviction and helped set us on a track of uniqueness and originality that would not have developed the way it had had he not been a part. How fortunate we are to have been able to perform with him last year in a reunion style when we re-released our very first record. His enthusiasm, his sense of humor, his style and his bravado will be missed by so many. We were a family, an odd and dysfunctional family, and we’ll be forever grateful for the time we shared with Chuck."

Matt Wallace, long time FNM producer has recently been working with Chuck for the first time in nearly 30 years, reflected on his friend.


"There is so much to say about Chuck Mosley but one thing is true, he lived life broadband. He was all in but, unfortunately, that means he was sometimes all into some less than healthy life choices. That said, I do know this, he had more love for those whom he cared about than did for himself. He loved and adored his wife, Pip, their two daughters, Erica and Sophie, and their grandson, Wolfgang. And, honestly, his love for his friends, band mates, and fans wasn’t something that you could ignore because he was the real deal. Chuck had no artifice and was always absolutely authentic.I met Chuck at a party in Berkeley because Bill Gould, Mike Bordin and Roddy Bottum had told me that they found their new singer. They were really excited but, when I finally met Chuck, he was completely drunk. Suffice to say I wasn’t impressed. Some days later we were in my 8-track studio in Oakland and Chuck came in to sing on some of the music we’d recorded and he proceeded to go full screamo all over the songs. The band and I weren’t particularly excited about the results, especially after all the careful preparation and recording we’d done up to that point. But, Bill and I hung out a bit with Chuck and tried our best to gently plant some seeds of inspiration. After some talking and mention of Frank Sinatra and David Bowie, Chuck stepped up to the microphone and actually sang with beautiful melodies and it was amazing. I’ve never, either before or since, seen a singer do a complete 180 degree shift in style and approach and completely reinvent his vocal style. It was a thrill to be there at the moment that, with Chuck's voice, Faith No More really came into existence and focus.Over the years having worked with him on We Care A Lot and Introduce Yourself, and very recently, his new solo album, I could see a guy who seemed to be able to almost will himself up and out of tremendous feelings of self doubt and the feeling that he was somehow ‘less than’. I think that, for years, he ‘faked it ‘til he made it’ and that was no small feat. He had years of feeling and believing that he was inferior. Fortunately, that close and clear connection to his feelings is what ultimately informed his lyrics. Yes, there were some fun, off the cuff, songs but, for the most part, Chuck really worked to convey his feelings in a true fashion. He wasn’t adept nor interested in playing a persona, no, for chuck, it was 100% all him, flaws and all, and that’s what made him special. He was unafraid to be vulnerable and in his singing and words, we saw ourselves.In recent months Chuck and I started working together for the first time in over 30 years and it was an absolute thrill. While the style of music wasn’t aggressive nor metal nor punk, it was one hundred percent Chuck. He’s the only guy I know who could take 2 acoustic guitars, a conga player, and a pile of reverb and effects and make it absolutely beautiful and powerful. He still had ‘it’, that fire in the belly, and I was thrilled to be working together with him again. He texted me 2 days ago with a long list of stuff for me to 'fix' and I grudgingly said 'yes, I'll do it'.At our last lunch, I was trying to reflect his own spirit and energy back on himself and I mentioned that he was one of the very first people to combine rap and metal/hard rock. He initially didn’t seem to believe me. He couldn’t get his head around the idea that he was talented and exceptional and could be the genesis of something special. It was almost too big a thought but I kept trying to open his head and heart to the possibility that he was special, inspiring, unique, and absolutely himself. I will never know if he believed or understood how talented he was or how many hearts and minds he inspired and connected with. But, those of us who are fans, and I’m, literally, one of his very earliest fans and am proud and humbled by the music we made together and also inspired by the dad, husband and father that he, over the years, would become.In the words of Chuck Mosley, “Spirit, excellence, further down the road. These are the tools you’ll need, further down the road.”

Tributes to the late singer have come pouring in including words from Jim Martin, Trey Spruance, Jared Blum, Korn his current band members and many other members of the music community.

Steffan Chirazi, Faith No More's biographer during the 90's and friend of Chuck's since the 80's wrote some words for us to share.


"I saw that Chuck had died, and the first song that sprung to mind was "Anne's Song"...I don't know why, it just did. Then I remembered a few things...Cliff taking me to see Faith No. More at The Stone in the late Summer of '86...the Tenderloin Sound of Music show where everyone seemed hugely wasted and Chuck lay on the floor during "War Pigs" sort of passed out, sort of showing he didn't give a fuck (he often did this during "War Pigs")...watching them all load into a yellow Ryder truck in Hayward before taking off on tour...Maxwell's in Hoboken, NY, Jim with the briefcase handcuffed to his wrist, Chuck screaming for another PD advance, Jim refusing, all the while the pair of them lurching and dancing and bobbing and weaving around a parking lot like some boxer's ballet...
Chuck had a huge vibe, a tremendous aura but let's not dress it up too much, he was wildly unpredictable and unreliable at moments when he truly needed to exactly that. Talented? Oh yeah. He had something for sure. And that 'something' helped the early Faith No More find their mystical magical and seemingly-impossible alchemy, helped them find a degree of comfort with their personal discomfort as the creativity gelled and the music flowed. They were brilliant, and yes, it is a shame that the brilliance couldn't have been continued with Chuck back then, but it couldn't have. It was impossible.
I hadn't spoken to Chuck for quite some time, thus I had no idea where his health was. I will say I (along with probably most people) thought he had navigated the issues of old and was in a calmer, more fruitful place in all aspects of his life. I thought he'd just pay his 95 cents, I didn't imagine he would ever say 'fuck you I'll skate to the beach and look better getting there' again...that's what we do in post middle-age, right? We take the calmer option. Most of the time. Again, I wasn't in touch with him and don't know where his life was at, but regardless, it is sad...
...Sad and jarring.My sincere condolences to those family members he leaves behind."

As lifelong fans of Chuck it will be hard to see passed our own sorrow, however we are thinking of those directly effected by this loss. His family, long-term partner Pip Logan, two daughters, Erica and Sophie and his grandson Wolfgang Logan Mosley. And his good friend Doug Esper. 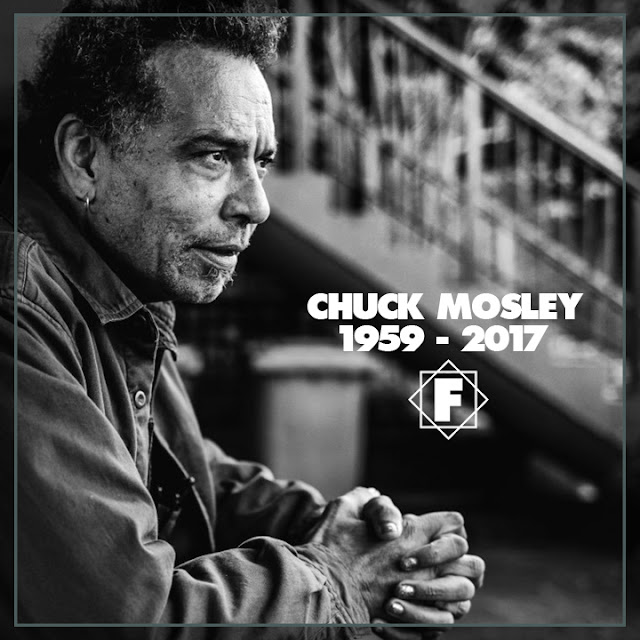 "I want the brightest, I want flourescence every day and night....For the rest of my life, open your eyes, won't you? Can't you see you're so beautiful to me?"

We have set up a JustGiving fund towards Chuck's funeral expenses. HERE
Labels: Chuck Mosley