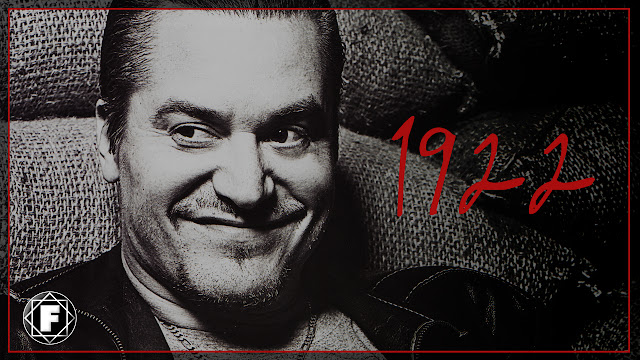 Mike Patton has written, performed and produced the musical score to the upcoming Netflix horror-drama film based of the Stephen King novella 1922.
This is Patton's fifth work as a soundtrack composer and has been kept quite secret, we have yet to hear whether Patton has taken a similar approach to this as with his previous soundtrack work. The only taste we have of what's to be expected is from the first trailer released of the film. The music is unmistakeably Patton, with minimalistic and eerie staccato string sounds. It seems to perfectly suit the tone of the story.


Ipecac Recordings have told us that the full soundtrack will be released in the near future following the release of the film which premieres October 20th on netflix.

'Hilditch directs with a sharp eye for disturbing imagery.' - Collider

'....at its best, it’s a reminder that King’s biggest strengths lie in his unparallelled ability to build tension, create atmosphere, and tell a direct and brutal story, not in his ability to launch profitable many-branched franchises.' - The Verge


Zak is an award winning Australian director whose credits include These Final Hours (2013), Transmission (2012) and Plum Roll (2007). We caught up with him while he was at Fantastic Fest for the film's premiere.

For all the Patton fans, eagerly awaiting to hear his score from 1922, can you describe how it sounds?

How to describe this? It's antique psychedelia, traditional ye olde americana, luscious orchestral with a touch of full on in horror. It is absolutely sumptuous and I can't for people to hear it. Words really don't do it justice, especially when trying to explain Mike's music

How many tracks did he write?

I think we ended up with something like 28 individual music cues.

Are you a fan of Patton's previous work? If so which of his many projects are your favourites?
I am a fan. When I was in the edit I got a little obsessed with his Bacteria Cult album. That thing is something else. Very cinematic.

How did he get the job?

My producer told me that Mike was in LA for a couple days (as was I) and asked if I was interested in meeting with him to discuss doing the score. It took me one second to get my head around what he was saying. Mike Patton!? Are you kidding me!? The next morning we had brunch and really hit it off. The rest was history.

How did you work with Patton to create music that complimented the scenes in your film?

We did an awful lot of work over email. The time difference in Australia to San Francisco worked to our benefit. I'd wake up to new versions of what Mike was working on or refining, give feedback, then wake up the next day to more from Mike. It was a solid 2 or 3 months working like that from memory. It was a pretty streamlined process. We kept our temp tracks on their so Mike could get a sense of what feeling we were trying to evoke. It was all very productive.

1922 is already receiving rave reviews coupled with the success of the It remake why do think Stephen King's stories are so popular at present?

He really has a way of getting under the skin of his characters. 1922 is no different. I don't think anyone really realised last year as they were in production that 2017 would be the year of the King. Its kind of cray to think that our little movie is right in the eye of that storm.

What was the author's reaction to your vision? Was he involved in the film making?

He was very hands off with the production. He gave my script his blessing then from that moment we went off and did our thing. He saw a rough cut then a fine cut and really responded well to both. That was a huge relief. You don't want to let down the King after he gives you the keys to his car.

Just from the trailer we can see that Thomas Jane is putting in a chilling performance, why was he chosen for the part?

I had a lunch with Thomas when we were casting. He was the very first actor I met and he blew me away. I knew I was sitting across from Wilfred James. He got everything about the character, the story and what I was trying to do. The results onscreen really speak for themself. He is truly chilling yet totally relatable at the same time.

What's next for you? Any plans to work with Patton in the future?
I'd love too. The man's a genius. Never in a million years would I have thought I'd one day be working with Stephen King, Mike Patton and Thomas Jane on the same film. There are no concrete plans for the next film. Just writing a bunch of stuff and reading a bunch too. I'm looking for something to float my boat the way 1922 did.

As Halloween is approaching could you tell us your favourite horror movies?

Oh boy. That's a tough one. I was obsessed with Creepshow and IT as a kid. Most recently the scariest film I've seen in It Follows. I loved it.

1992 is released October 20th only on Netflix