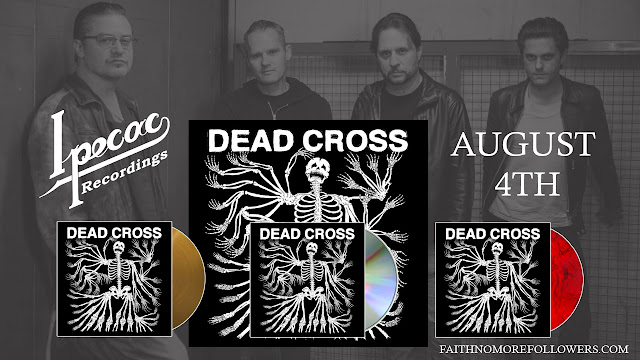 Every Mike Patton project deserves some feverish anticipation. Whether it's the happy return to symphonic work with Kaada (Bacteria Cult) or the long awaited comeback record by Faith No More (Sol Invictus), Patton fanatics all crave to hear what acrobatic stunts his voice will perform this time.

The new Dead Cross album does not disappoint.

It is by far the most brutal work Patton has recorded since Fantomas and with both bands featuring Dave Lombardo on the kit there are bound to be some similarities. Comparisons can also be made with Mr. Bungle's first demo Raging Wrath Of The Easter Bunny, Patton puts the same kind of fast paced anger into his vocals as he did in 1986, therefore it's no surprise that fans have been aching to hear this release ever since it was announced. Through Dead Cross he delivers so much more than bloodcurdling screams and growls, Patton's huge arsenal of voices is employed to its full extent and there are haunting melodies amongst the ear bashing insanity.
It is easy to see why Patton agreed to be a part of this music, it is right in his comfort zone however he also has room to expand from the hardcore tones and create something fresh and incomparable.
Lombardo is without question one of the most precise drummers of all time, his drum fills and timing on this album are machine-like yet still overloaded with passion.
Michael Crain's guitar is mercilessly intense, his riffs will make Kirk Hammett piss his pants! Justin Pearson grinds his bass with a gritty intensity, Crain and Pearson are a match made in hell. There are times when you can be forgiven for hearing Retox's sound but Patton's unmistakable noise makes this an entirely different force to be reckoned with.
Ross Robinson's production is raw and not heavily treated with effects, which gives the music the exact garage metal feel needed, explicit and provocative.

Highlights on the album include Obedience School, the wonderfully energised version of the 1979 Bauhaus song Bela Lugosi's Dead and the dirty protest song Divine Filth.

The whole album has a retro thrash metal vibe with a modern twist. Dead Cross is an exhilarating punch in the throat that will leave you with a satisfying bruise or two. Enough to please hardcore and Patton fans alike.


"Your the next to be eaten, so have a nice weekend'

Authors tip..... Put on your copy of Mike Patton's Mondo Cane straight after listening to Dead Cross, just appreciate the outrageous limits of his voice!


Church of the Motherfuckers