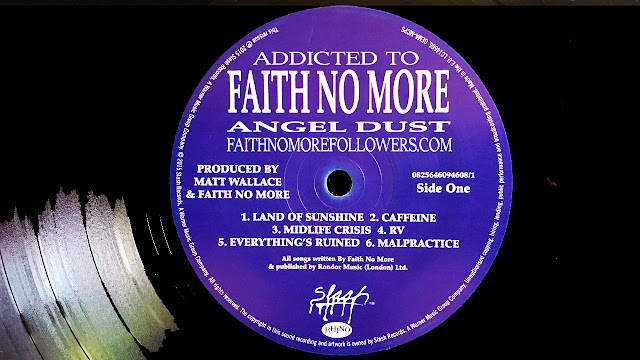 In 1992 I developed a problem, a serious addiction to Angel Dust. If I wrote anywhere else but on a Faith No More fan page people would be I'm hoping concerned, however I think within this community it's possibly a problem we all have.
The fourth album by FNM is mainlined into my ears at least once a month, until my veins are bursting with their intoxicating music.

The following is not entirely an album review it is also a personal story of how this record has influenced my life. I'm hoping I'm not the only one who has felt a spiritual connection with AD. And with whom this collection of songs has had a profound effect upon their existence.

AD was released on June 8th 1992, I was 15, at school and part way through my GCSE exams. If it wasn't for my trusty Walkman loaded with the AD cassette I'm sure that my education would have suffered somewhat, although it is also quite possible that my attention was distracted by a need to study the lyrics rather than Physics. AD was without a doubt a release from the stress, an escape from the reality of teenage pressures and the soundtrack to my adolescence.
Not being a member of the football hierarchy at school, music and art were my distraction. FNM were considered a weird choice, Nirvana were the popular alternative to mainstream rock. I became 'the kid who's into FNM' a tag that suited me fine.

The question that was on the lips of those in the know at this time was how could Faith No More follow The Real Thing, the groundbreaking record had saved me from developing an unhealthy interest in Bon Jovi, GnR and Skid Row. The answer: it exceeded all expectations lifting FNM into a whole new level of genius. 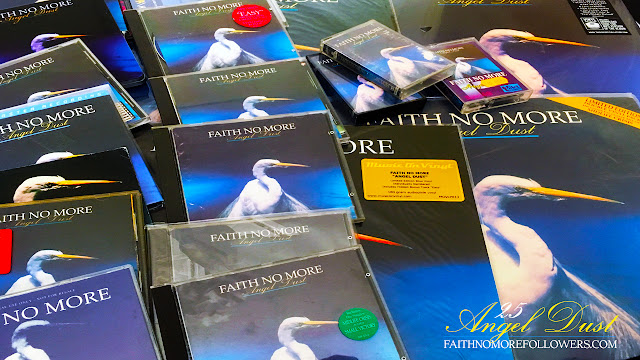 AD was so much more than just another tape in my collection, this album would eventually change my perception of music and shape my life, fashion and future. However melodramatic that sounds it's the truth. Being a keen art student the cover was enough to fascinate without even listening to the music. A graceful snowy white bird in pre-flight with deep blue backdrop in contrast with dirty orange hunks of meat on the reverse, this design was unlike any 'rock' album cover before. In the pages was the band photo, a dark and mysterious portrait and not the playful scamps we were familiar with. Where were the funny masks and bright coloured shorts? Not a fish or hand mounted eyeball anywhere to be seen. The abattoir image stuck in my brain leading to some rather disturbing paintings in the next few years of my further education in art. From which I discovered artists such as Francis Bacon and Damien Hurst who explored the animal carcass in depth.

AD is a collection of 13 (14 with the later inclusion of Easy, 15 with the inclusion of As The Worm Turns on the Japanese edition) moments of bliss, some ferocious, some serene, all spectacular.

On my very first listen in 1992 I remember Land of Sunshine hit me with a wave of excitement and relief that the familiar FNM sound bounced from my headphones. However 40 seconds in and it's something new entirely that rings true. Visions of a cruel and bizarre carnival freak show, with laugher track provided and Mr Bungle gripping the hand.
I was hooked, it was that easy.

Songs like Caffeine, Midlife Crisis and Smaller and Smaller have a tribal rhythmic discipline only Bill Gould and Mike Bordin can control. Mike Patton like a schizophrenic shifts between operatic outbursts and spitting grunts of aggression! Jim Martin's guitar bites down, crunches and chews up complex melodies. While Roddy Bottum's keyboards float gracefully like dark clouds over a raging storm.

There are perfect examples of FNM’s diverse brilliance and Patton's ability to create genuine characters through his lyrics with the grotesquely realistic RV , the heroically homoerotic tones of Be Aggressive and motion picture perfect 'Crack Hitler'. Some prove the band haven't lost their playful humour in full.

Everything's Ruined, Kindergarten and A Small victory offer glorious anthemic choruses that put a grin on the face and skip in the step.

Jizzlobber and Malpractice creep up and down the spine with a chill enough to make the listener scared to turn off the light. The later dragging us by our hair into Mike’s bizarre mindset to glimpse the Fantomas like creatures he would create in years to come.

I'd just like to point out here that I had reviewed every song in great detail, but reading it back I astounded myself with what an absolute nerd I was being so shortened it.

The final chapter in this book of very different stories, Midnight Cowboy demonstrates FNM’s ability to pick the most unpredictable song to cover. Their version of the John Barry soundtrack is the closest thing to calm amongst the track list and the perfect ending to a flawless  album.

Patton’s lyrics made me appreciate the English language, phonetics and prose. From finding joy in trying to understand his studious use of words, rhyme and annotation I discovered more sense from Shakespeare, Blake and Edgar Allan Poe. His poetic lines of wit inspired my schoolwork, you would often find a phrase stolen directly from the album in my English essays or scrawled on a canvas over an acrylic animal carcass.  The lyrics of Angel Dust had lost the positive vibe of The Real Thing and were dark and satirical for which I felt a bond with Patton, as crazy as that sounds. Not that adopted the ideals of a miserable goth with a black outlook on life, but there was now a certain underlying cynicism. His subject matter so simple yet profound, who can write a song about coffee and make it sound so sinister....Patton can. Moreover who can argue with the unforgettable line: ‘you’re perfect yes it’s true…but without me your only you…’ 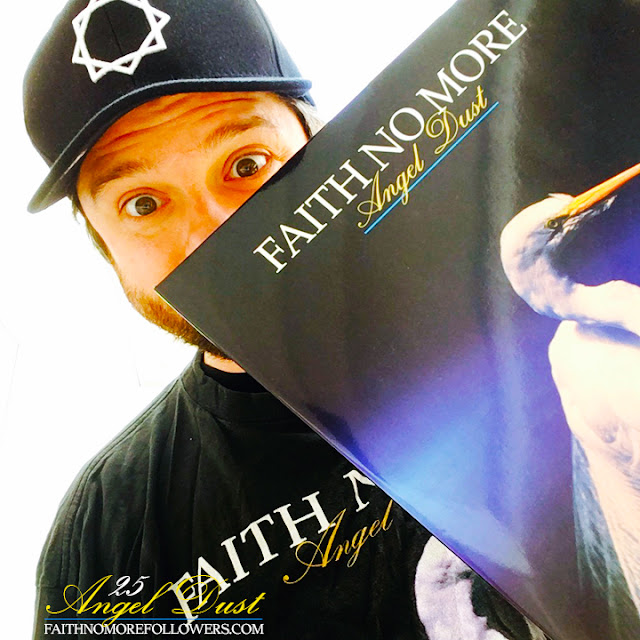 Essentially my life revolved around AD and I played that cassette so much that by the time I’d got the CD the writing had worn away completely, leaving blank grey plastic.

The suitability of prospective girlfriends was ascertained by their reaction to the album. A girl once played me a Take That song whilst alone in her bedroom and whispered, 'this is how I feel about you.' I responded by playing her Malpractice before walking out. I traded in my 91 style: shorts, waistcoat and converse for rolled up combats, baggy T-shirts, doc martins and a baseball cap. My was hair was cut and greased back, out came the earrings in went a ring through my eyebrow. When looking back at photos from this period in my life nine times out of ten I'm wearing an FNM T-shirt. In holiday snaps, school sports days and family occasions.
'Jizzlobber' became my cyberspace moniker and appeared in the top five of every Tekken high score board in town.

Throughout 92 and the next few years there were other groundbreaking albums were released but my attention dominated by AD and all other music was  compared to standard it set. In hindsight this era was a golden age of alt rock music; Primus, Pearl Jam, Soundgarden, Nirvana. AD’s (and here I have to drop in a second Mr Bungle mention) diversity turned me onto different genres I began listening to funk, jazz, soul and film scores because I would hear a shade of Crack Hitler or Be Aggressive.

It was also at this time in my life I discovered I could hold a tune, therefore I decided to form a band. We were called Pills for Breakfast and played FNM, Nirvana, RHCP, Metallica and GnR covers, we also wrote a couple of our own not so good songs. This was the foundation for my future career. If you saw me on stage back then you, as FNM fans, you would notice I shamelessly stole every Patton crawl, somersault and facial expression ( occasionally slipping in a bit of Eddie Vedder ), but luckily I was amongst Nirvana and GnR lovers so it went unoticed.
After leaving university in 1999 I was disillusioned with Art and obsessed with music, soon I had begun to earn my living as a singer songwriter. I was in many 'almost made it' bands for a few years before I moved into nightclub dj-ing a path which was always determined by my love of music and I had AD to thank for that.

You see to me AD was and is not just an album created by a bunch of guys in a studio it was in 1992 a way of life, if music was my religion then AD was my bible. Twenty five years on and each song still evokes a different mood and equally for every mood there is a song to accompany. A song can be appreciated independently from the album or you can appreciate the album as a whole from beginning to end. Selected songs bring back memories from my past, I can remember where I was, who with and what I was feeling at the time. True there is no real tearjerker, no song to wallow in when my heart was crushed and also no song I could croon to win the affections of a girl (well not until I’m Easy was added sometime later). However the whole record is an ego boost to pick me up when I’m down, it says ‘fuck you and fuck the world…..go, fight, go, fight, WIN!!!'

There are more copies of Angel Dust in my collection than any other album I own, eight cassettes, fifteen CDs, six vinyl. Not to mention shirts, a hat, posters......

I've read and heard all the negative comments and yeah sometimes it is noisy, sometimes you can't quite tell what Patton is spitting about, sometimes its a little confusing but it’s meant to be that way. It's this that makes the album so outstanding. Yeah I totally get why people just don't understand it but all that matters is that I DO and I feel special, intelligent and unique because of that!

It wasn't just a phase and I didn't grow out of it.