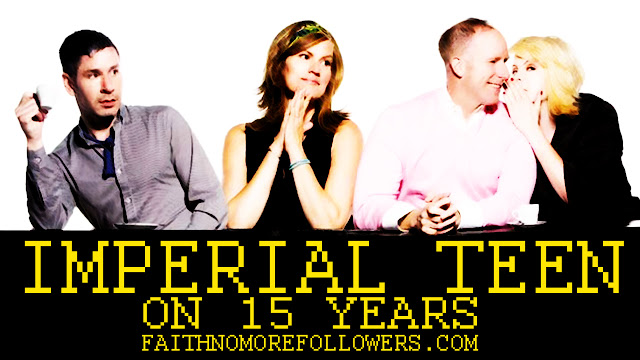 Just out of curiosity: what did we do for fun in the summertime before Imperial Teen started making records? Ever since these California New Wave trash-pop deviants burst upon the scene with their glorious debut, Seasick, back in the summer of 1996, they have provided essential hot-weather party starters such as "Butch," "Lipstick," "Year of the Tan" and their Jawbreaker theme song "Yoo-Hoo." Imperial Teen's second album, 1999's What Is Not to Love, became a cult classic despite getting abandoned by their record company amid various major-label shenanigans. But the Teen return fully charged with their third album, On, locking into a Watusi groove of garage-punk guitars, boy-girl vocals and the usual glut of cleverly smutty lyrics. On kicks off on a high note with the one-two punch of "Ivanka" and "Baby," all hand claps and harmonies, but the band just keeps percolating all the way through to the end, hitting particularly effervescent highs in the bubbling hooks of "City Song," "Teacher's Pet" and "Undone." On is that increasingly rare rock n roll specimen -- a magnificently hedonistic party album for extremely consenting adults.

Yet On succeeds not in spite of its simplicity, but because of it. Imperial Teen are happy with what they do, they're good at it. It's fulfilling for them, yet they're too human not to long for something more. This is music best suited for drive-thru drive-throughs and unchanging landscapes of strip malls and condos. Or better yet, for lying in the last pure patch of undeveloped land left in your suburban wasteland of choice, staring at the stars and pondering your own inability to do anything about the forward march of progress.

We're immensely proud to get to release "On"-a GREAT pop record from the fabulous Imperial Teen! Produced by the band with assistance from Steven McDonald (Redd Kross) and Anna Waronker (That Dog), this has got to be the most stunning and fully realized album of the Teens' career. Hooks that bite, melodies that soar and lyrics that reveal themselves to be much more than pure pop confection. Boy/girl harmonies mask lyrics with a bite, and guitars and keyboards are just as likely to drone as chime.