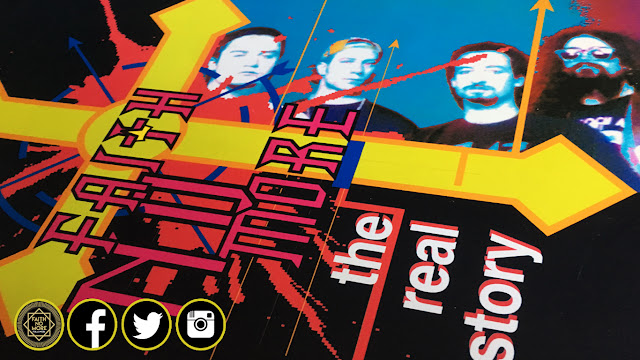 On February 24th 1994 Castle Communications released the The Real Story, a detailed history of Faith No More up until the end of 1993 written by Steffan Chirazi.

This was Steffan's first book and the first official chronicle of FNM. Before writing The Real Story Steffan was the go to guy for a FNM article, review or interview with his words appearing regularly in leading music publications such as Kerrang!, RIP, Spin, Bam and Sounds.


"Well there wouldn't have been three chapter 60's, and there wouldn't have been about forty eight typos so let's just start right there. When I saw the book I actually shed a tear not because I was happy, I was like 'Oh fuck! They printed the wrong file.' I think the book itself looked like large magazine and I really wanted it to be a book. I know people ask about it being reissued but I don't know who owns the copyright to it, although I am trying to find that out. If it was ever to be reissued I would absolutely want somebody else to take over adding on the years after the book ended. It would only be fair to have someone who has followed them with perhaps as much fervour and enthusiasm as I did at that time to do an addition to it. I'm a big believer that if you wanna write really good books on bands that have been around for several decades you need multiple collaborators to make them worth their while. I don't think one person can ever write a really interesting book, if you wanna mix it up you gotta have a couple of different views. I would love to try and get it out again." - Steffan 2016

We have since seen the Faith No More and Mr. Bungle Companion written by Greg Prato, which heavily borrows from Steffan's work but is a great read. Next year will see a highly anticipated biography of sorts written by Adrian Harte.

Here are a few sections from The Real Story. If you can get your hands on a copy of this book it is well worth a read and contains some amazing photographs. 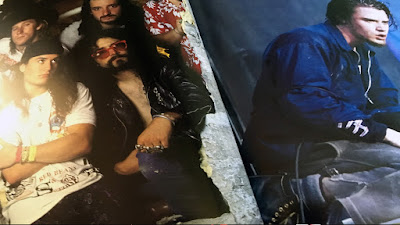 FAITH NO MORE  'From The Author'
This book gives you the first true and genuine account of everything that Faith No More have been through in their 11 year career.  It is incomplete in the respect that the band are nowhere near the end of their career. Doubtless there will be a whole lot more to document in the years to come.‘The Real Story' is made up of original quotes from the five current band members, ex-singer Chuck Mosley and producer Matt Wallace. All were interviewed between February and September of 1993 exclusively for this book. Warren Entner and John Vasillou at WEM Management felt it best not to make any comments, as they still work with the band. There are also two transcripts in the 'Onward' section from which some material was used for magazine features, the reason for their inclusions are explained within. Faith No More agreed to help me tell 'The Real Story', despite the fact they will receive no money from its sales. Each band member donated some of his free time to talk about their life, and the band's history, The copy has since been checked for accuracy, but in no way has anyone from Faith No More tampered with the flavour of any portion of the text. It was a dream situation. I whole-heartedly thank Bill Gould, Mike Patton, Jim Martin, Mike Bordin and Roddy Bottum for their unflinching honesty and their ability to leave me alone once they had given me their input. I also thank them for being the most interesting band to emerge in the last decade. I thank Matt Wallace for his unique insight and vision of the band. And I thank Chuck Mosley for talking about what must be a very difficult subject for him to deal with. I hope he has good luck with his latest project, Cement. I must also thank Warren and John for their total support of my endeavours over the years, their trust, and the fact that they never once interfered with this project.I would also like to say a big 'thank you' to Phil Scott for starting this whole ball rolling, to Laurie Pryor for wanting and believing in this book, to Sonia Bailey for helping the paperwork shuffle along, to Eugene Manzi for his help through the years, to Mary, Ann and Neil for just being, to Steve Stolder for helping me learn a little more about Grammar, to Lonn Friend for consistently supporting my work and to Geoff Barton for taking me in during the Summer of 1983 and sticking with me ever since. Oh, and thank you Deanna for the title!Thanks also to Cliff Burton (RIP) for introducing me to Faith No More way back when. He may be gone but he isn't forgotten.
This is a book for people who like truth. There is no fabrication, and there are no lies in these pages. 'The Real Story' is for fans, both of Faith No More and rock music. 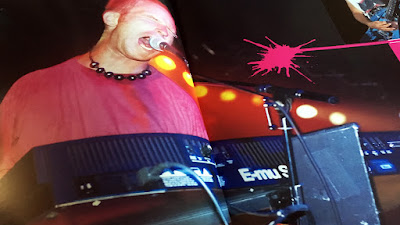 Afterwards Burton, Martin and I went and ate some Mexican food two doors down the street. I wouldn't touch the Chile Verde; it was green food and I wasn't into that. Martin yelled repeatedly 'EAT THE GREEN EAT THE GREEN EAT THE GREEN!' and intimidated as I was, I wouldn't do it, I wouldn't buckle under to the booming voice of the weirdo in those glasses, I remember him driving a beaten up Ford Pinto, cars that were famous for their potentially lethal gas tank positioning; it was in the back of the car.
One rear-end whack and your ride could go up in flames. Jim Martin would purposely drive his over rough terrain wasteland, laughing maniacally. He once mad a girlfriend of mine cry doing this.
Later on, in November sometime, I went to Bordin's apartment. he mostly huddled cluttered bedroom, littered with albums, clothes and some African artefacts. A huge pile of bedding and pillows sat atop his and girlfriend Marilee's bed; it looked like a perfect place to hibernate for days on end. His dreads were growing, thick puffy lumps, 'clubs of doom' as they became known, for if Bordin swung his head at you and they hit, you'd bruise. He prepared a meal, this enormous bowl of spaghetti and a big piece of steak, and we sat around stuffing our faces. Food and sleep are two of Bordin's major pleasures. He was halfway to nirvana. 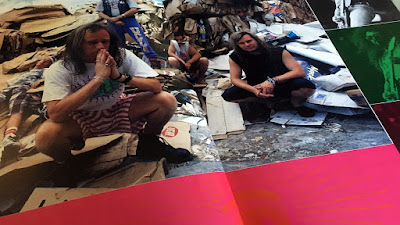