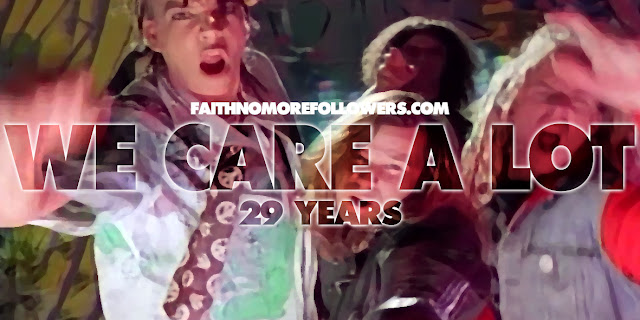 Faith No More's debut single We Care A Lot was released on January 18th 1988.

With it's thwacking drums , bass and heavy guitars. Faith No More's debut single, released in 1988, is funk metal with added punk sensibilities -both in the raw, untutored vocals of Chuck Mosley, the manic singer later replaced by Mike Patton, and in its gloatingly non-PC lyrics. A seminal alternative rock song, We Care A Lot still sounds electrifying.

Read our in depth article on this groundbreaking song HERE.

Faith No More's early singer explains the genesis of the group's first bona-fide classic, and why he feels certain versions are a tad too "tight ass"

While it was Epic that truly broke down the door to stardom for Faith No More, it was another track a few years earlier that served as the group's introduction to the alt-rock masses: We Care A Lot, the part-rap/part-rock track that seemingly railed against
posing pop stars on Live Aid's worldwide stage (and the hypocrisy of millionaires asking for other people's money), as well as referencing 80's pop culture and random world events.

"When we had started on that tour (in support of 1987's Introduce Yourself) it had  just gotten picked up by MTVs 120 Minutes, and they were playing it all the time," the group's early singer, Chuck Mosley, recalls. "It was the song that brought in a big chunk of the audience at that time. It was obvious by the response. It was almost overnight. We had started the tour, and a week or two later it had gotten on 120 Minutes. The attendance was
totally bolstered by that song coming out."
The quirky little anthem We Care A Lot turned out to be Faith No More's first classic, touching on rap, funk, metal and alt-rock - all in a little over four minutes. However, when the group - at the time Mosley, guitarist Jim Martin, keyboardist drummer Mike Bordin - first heard the tune, not all of them were blown away.
Mosley: "Roddy had this song he had come up with overnight. My initial response... To be perfectly honest, it was the least challenging to me. It was a little bit more commercial than what I was used to being part of. Especially after all of a sudden being in a position where you had a single, and you had to make sure you'd play it every night. I'm a punk rock rebel, so I had to complain about it - 'God dang, this is so commercial!' I thought I was above that, and it was below me. It was fun to sing for a while, then it started feeling kind of silly to me. But it was Roddy's song, and Roddy has a total taste and ear for catchy hooks. Coming from that perspective, I totally respect anything he does, but I felt it was a little soft."

Interestingly, there are three different Mosley-related versions of the song that
have been recorded over the years: two by Faith No More (on their 1985 debut album of the same name [in the UK], and the aforementioned Introduce Yourself), and one on Mosley's recent comeback album, Will Rap Over Hard Rock For Food.
"We named the first record after it, and put it on there. With that record, we ended up shopping it around for a better deal, which. ended up being Slash/Warner Brothers. One of the things that they little irritating at the same time. So, for the heck of it, we came up with a whole new intro, and we would end it with the chorus chant. Just to mess with people. Or we would do [sings the bass line], sing We care a'lot', and then end it there. Then it just kept
growing. Until we decided to do it over - but our way - and have it more laid-back and grocny. And fatter and louder, fuller."
"We were determined to have a version that blew away the first or second one. We just hit on something and it clicked. We wanted when they signed us was to have us updated the
lyrics - actually, that time it do the song over again, because they felt it hadn't fallen on enough ears. They thought it was a hit. Hence the second version. There were two years between the two versions, and we updated the lyrics."

While some rock acts would possibly baulk at re-doing a signature song, Mosley didn't have a problem with it - in fact he welcomed it.
"I always like doing the same song on another album. I actually have two songs on Introduce Yourself where one song set a precedent, in a sense, in a group of lyrics: Chinese Arithmetic and RN'R, where I had the same lyrics repeated. R N'R was almost like a sequel. I elaborated on the line 'Like the time you tried to teach your nephew to...'. I had originally said 'fart', but they changed it to 'walk'. So I had a habit of ripping off parts of songs - including my own. It kind of made sense to have a second version, where we were biting off
of our own song."

Since leaving Faith No More in 1988 (he was replaced by Mike Patton), Mosley has
kept a low profile, save for a pair of obscure releases as part of the group Cement, and a brief union with Bad Brains that didn't yield any recordings. For the past few years Mosley has been working on his aforementioned solo debut, which includes a version of We Care A Lot, on which Bottum guests.
"The reason [for doing the song] was because when we were playing a lot of early shows, before we had a record, a lot of people in the audience would yell: 'We Care A Lot!' It was flattering... and a was 2001, right around 9/11, so we had it talkng about stuff that was hip around that time - Trainspotting and stuff like that. Unfortunately it took so long to get the record out, that these lyrics are almost dated. I just said forget it. I wasn't going to update it again."
And it turns out that the latest version is the singer's favourite of the three. 'I'm a punk rock rebel, so I had to complain about it - 'God dang, this is so commercial!'"
"Definitely, I'd have to say the latest one! I had no control over the actual music per se
back then. If I did, I would have directed it to go a little harder and a little less 'tight-ass'. I don't want to say anything to offend, because me and those guys all get along we have a nice relationship now."

Over the years, We Care A Lot has brought in some sweet royalties for the man who is known for his penchant for off-key vocals.
"Every time it would die out on one front, I'd get another thing, like Dirty Jobs [a US TV show that it's the theme tune for], and then Rock Band. And the fact that I had license to do it, since I owned part of the publishing of the song, I didn't see any harm in ripping myself off."

Labels: Chuck Mosley Faith no more Introduce Yourself We Care A lot