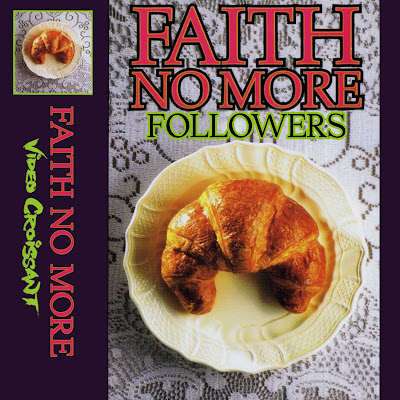 JUST WHEN you thought it was impossible to buy anything else from Faith No More Ltd, the Christmas Cobbler turns up, late, but in good spirits. Yet more stuff. Yet more pop dollars to spend.Fund the cause and keep everybody smiling. They spoil you. Yes, they really do. 'Video Croissant' is basically a 10-track compilation of Faith No More promos, custom-FXed for the MTV machine. There are few surprises. As you might expect from America's least lumpen, the
business of Faith No More is gorgeous and sick.
There are snippets of gibberish from their Rock In Rio appearance, and 10 efficient videos for the likes of 'We Care A Lot', 'From Out Of Nowhere' and the maddeningly successful 'Epic'. It's a shame that 'Video Croissant' was completed earlier than the release of 'I'm Easy', because that video is as fresh and funny as anything on offer here, but 'Video Croissant' is still a tribute to the band's black humour, nonetheless.
At the end of the day, this compilation is a luxury. Faith No More are too big now to be an entirely believable prank. They have been completely accepted by the industry they still claim to despise, and just such a release must be an exasperating display of buck-f**king on behalf of a band who were once too smart for the downright bleeding obvious. 'Video Croissant' is a rose-tinted package, but ultimately a graceless move.

THERE CAN be no doubt that Faith No More are sick individuals. Watching Video Croissant is like going through a crash course in black, disturbed humour. This is good news, because it means that the band's promo videos are infinitely better than just about anybody else's you care to mention.
With a recurring fetish for fish and paint, 'Epic' and 'Falling To Pieces' throw in enough lasting visual images (the dying fish out of water at the end of the former, Mike Pattern sprayed by a jet-stream of paint during the latter) to complement uniquely brilliant singles. 'Surprise! You're Dead', directed by bassist Bill Gould, is also suitably vile, with its black and white montage of dead meat shots.
Indeed, it's only the routine performance clips for 'From Out Of Nowhere' and the Chuck Mosley-era 'We Care A Lot' and 'Anne's Song that foresake the twisted approach, and consequently they're Faith No More's least successful videos. The 'Angel Dust' selections, though, are all startling and shocking in their own right. 'Midlife Crisis' has Mike Patton being stretched between tour white horses, 'A Small Victory' mixes grim battlefield shots with a surreal game of chess and, worst of all, 'Everything's Ruined' shows guitarist Jim Martin topless.
In between the clips Faith No More fool around on MTV, doggedly pursue helpless old ladies with camcorders, patronise just about everybody in sight, impersonate each other with pinpoint accuracy and perform a pure-noise live version of 'Caffeine'. It's all summed up by keyboardist Roddy Bottum's description of just why a recent gig in Seville was the band's best yet. "Mike Patton picked up this Evian bottle filled with piss," Bottum grins, "opened it and poured it over his head." Barking mad and resolutely strange, Faith No More are the vomit stain on your TV screen.