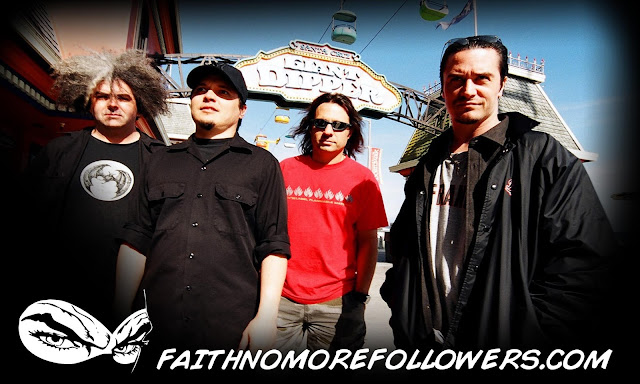 In 10 years of touring, Mike Patton has learnt the importance of avoiding  "slobbering children asking for whiskey" and food that makes you sound like Fred Durst. Unfortunately, he's not yet figured how to avoid doing his wife's domestic chores...

"I live in the Castro district in San Francisco, the gay district. It's the gayest place in the world you could ever live! It's good though, really nice neighbourhood. As you can imagine, everyone is very attentive and takes care of their yards, and it's very safe, it's good."

"I get up around 10, and the first thing I need is coffee, and lot's of it! If I don't get it I get headaches and hideous withdrawals. I'm an addict. First step is admitting it, and I'll admit it! I spend the first few hours on the phone, just business shit for my label [Ipecac Records] or the band - it's so mixed up these days I don't know what I'm talking about. If my wife's around, then I run around doing awful domestic things for a few hours in the afternoon then I get home around five or six, fix myself a drink, and go to the studio to write. I gotta do it, even when I don't feel like it. Put on a pot of coffee and just go for it."

"Then I'll stop for dinner - if the wife's home I'm eating good. I'll maybe watch a movie while I'm eating dinner. It's good to watch a movie a day, it's food for thought. I;ve been asked to do some acting and I've got a couple of things. One's with Dennis Hopper. I'm not that wrapped up in it. They may well say, 'Hey, we need to shoot next month', and I'll say, 'Well I'm on tour' so it's hard to really take to seriously."

"The more touring you do the further you get behind with your writing. I always say to myself this year I will do it less, and I blink my eye and this year'  almost fucking over. What have I been doing most? Touring."

"One of the first lessons I learned from Faith No More was knowing when to say  no to touring. We toured one record ['The Real Thing'] for two years, and that's just not healthy. As a result we didn't want to see each other for a year and it took us two years to make the next record. You just gotta realise that you're the boss, and musicians usually don't. Musicians are gullible, naive children who are ripe to be raped. Because they do what they love they're very genuine and usually will bend over backwards. But you've got to learn when not to take it in the ass, because it will kill you."

"When you're with a good group of people though, touring is a pleasure. It  doesn't have to be this hideous nightmare where you're avoiding people and counting the days and dealing with moronic little babies demanding this and that, or rock star bullshit and attitude. Fantomas has been one of my best band experiences, it's amazing. They're not a bunch of slobbering children asking for whiskey, they're there to work."

"An average day on the road usually consists of finding things to occupy the empty hours. You look for record stores, museums, book stores. Sydney's good, man. There's this primitive art store on George Street that I love, I go there every time. It's called New Guinea Primitive Arts. They've got some of the coolest shit, like head drying racks for shrunken heads. I didn't buy the head drying rack, it's a little freaky, it still had blood on it. I don't know if I need to look at that every day."

"Before a show I eat as much as I possibly can. If you go on stage and you're already satisfied, how can you play a bad show? You've got yours already. I could go up there and it sounds terrible but I got mine! Otherwise when I'm singing, there's little thought bubbles coming out of my head, 'Gee, what restaurants are going to be open?' You're going to be eating deli tray backstage or Domino's pizza, who needs it? That shit is poison for musicians. They want you to eat that stuff so you sound like Fred Durst or Something."

"I'm very superstitious, I've gotta get out of the stinking, sweaty backstage area. Some godawful band was in there last night, they were standing in there naked and sweating, fuck! Get me out of there! I'd rather be sitting eating a beautiful plate of pasta somewhere and being as far away from that environment as you can. And then you come back, and you know what? You're walking on air. I just ate frog's legs with duck liver pate, who can touch you, you know?"