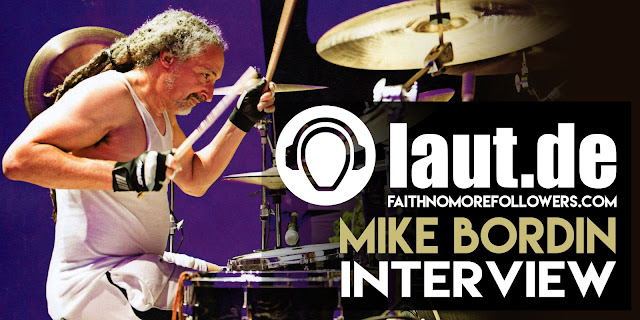 
"Mike Patton has defined us"
Interview by Michael Schuh

We spoke with Faith No More's drummer Mike 'Puffy' Bordin on the new re-releases, the future of Faith No More and his memories of his time in Ozzy Osbourne's band.

Faith No More are band of nostalgia. In August arrived the reissue of the forever out of print debut album "We Care A Lot" as a Deluxe Edition with Bonus Tracks, and now the San Francisco band now allows their famous albums "King for a Day ... Fool for a Lifetime" (1995) and "album Of The Year" (1997) to flourish in new editions including detailed liner notes. Although we recently chatted with bassist Billy Gould, there have been developments since. Drummer Mike is in a good mood when we find him at 8 o'clock in the morning U.S time.

Around 1995 Mike Patton already worked on a lot of solo projects. Was there ever a problem in the band with him doing so much outside of the band?

Well, I think that initially we didn't realise that was gonna happen and it definitely raised eyebrows. But the truth is: When he has his Faith No More hat on there's nobody better than him. I give him the freedom that he needs to satisfy all of those imposes that he has. I mean, when managers are there - we're talking about the 90s where big business was ruling things - things can get a little bit weird. But the truth of the matter is: He's the face of FNM, in my opinion. He's defined us. If the guy wants to do something otherwise, sing Italian music or explore something extreme and non-commercial, hey, fine. I respect what Bill does and Roddy's done a ton of stuff at the side too. I had a little thing that I did once in a while for 15 years too. I think all that stuff serves an important purpose. If you feel that people are locking you into  something that you don't particular wanna be locked into anything, that kinda sucks. It ruins the good that possibly could come from anything.


Will there be a new FNM album?


Are you already working on it?

No. But I've recorded a bunch of songs and they are all really good. When or whether they get finished is not hugely in my control. The guy that kinda take it to the next level is doing other things right now which is important and appropriate. We're all very proud of Faith No More and I know if you talked to Bill recently, he's so proud of what we did. We really feel that we did something, a value quality-wise. But it's also important to understand that you can go too far, pushing it too far, so I don't know. Do I hope there will be another FNM record? Yes. I Would love to see it. The fact is it just has to come when and if it's ready to come. And that's not in minutes. So it's not on Warner Brothers' release counter for next year, but how we left our band last time we were on tour was very positive. And I think the door is ... yeah, it's certainly possible. Way more possible than it was five years ago when I used to tell everybody everyday: No, never happens, give it up.


As a longtime drummer of Ozzy, please tell us: Does he still sing live?

Oh yeah. Absolutely. Look at it this way: Some of those clams - does that translate into German? - these little mistakes, little faults - you think he fuckin records that shit on tape so that he sounds like he's making mistakes on tape? No he definitely sings.


I've heard he uses a backing singer behind the stage hitting the high tones.

(sighs) Oh no. I'be been with him on stage for 15 years and have done close to a 1000 shows - again: just think about that for a second. If he came out and he was perfect, you know, if he came out and sang "Hole In the Sky" or "Sabbath Bloody Sabbath" with say 16 pitches up from where he could normally sing anyway, I would say, well hey what's going on here. But no, you listen to him and his voice is imperfect, it cracks, it breaks. I don't know I mean it's so fucking loud on stage where he is, okay that's what he's used to, but it's incredible. I often wondered how he could fuckin hear himself. Our singer always says, come on, guys, it's too loud, I can't hear myself. Singers gotta hear themselves on stage to pitch. To be in key. Otherwise you're just kinda lost.

I've seen BS this year it was fabulous.

Yeah I mean I like it man. I like his energy, he's enthusiastic, I think Tommy does a great job. I have huge love for Bill Ward, would I love to see him play? For sure, but that's not up to me.

That shit that happened in Prague was kinda crazy. Where a TV flew out of the window and almost fuckin hit two people that were down there, people got arrested, it was a mess. I know he wrote about it in his book. For a guy like me to play with Ozzy and run with him for that long, honestly that's the craziest thing of all. When you think about what happened in that time, the TV show he did, his wife got cancer, he almost died on that quad bike, all these crazy things happen the whole time. And I gave him the best I had every fuckin day and I'm proud of that. The music he's made in his lifetime had such a powerful impact on my life. To be able to give something to him like that and you know, worked my ass off behind him every night gladly, to me it's like kind of saying thank you. Kind of just giving him that respect.

Read the original German interview HERE.
Thanks to Michael Schuh for providing us with the original conversation.