THE DILLINGER ESCAPE PLAN | Irony Is A Dead Scene | 14 Years 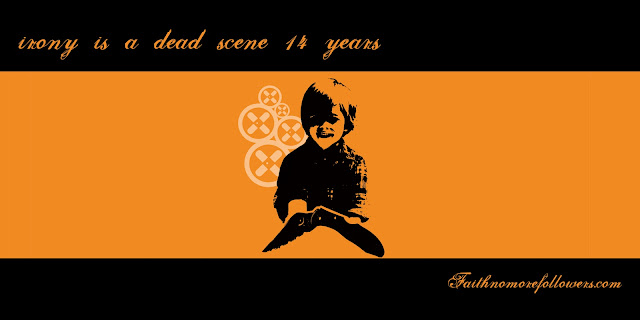 A collaboration between Mike Patton and The Dillinger Escape Plan, this four song EP is a wildly progressive amalgam of musical styles that combines the feral intensity of hardcore, the technical precision of metal, mind-boggling tempo changes and sonic textures usually associated only with experimental electronic music. "Irony Is A Dead Scene" pushes the limits of speed, composition and complexity. Perhaps the most extraordinary track is a cover of Aphex Twin's "Come To Daddy" which brilliantly and significantly serves to blur the distinction between "electronic" and "live" music.


Patton's brooding lyrics and seemingly limitless vocal ability combine with the incomparable skill of Dillinger to create one of the darkest, most brilliant metal records in recent memory.


The pairing of US math-metal bruisers The Dillinger Escape Plan with guest mouthpiece for one EP only, shit-eating former Faith No More enfant terrible Mike Patton, unsurprisingly doesn’t result in chill-out mood music. Instead, prepare yourself for an onslaught of Herculean proportions.


"I guess we started our relationship with Mike Patton a few years ago before I was in the band when they toured with Mr. Bungle, and ever since then, Ben, our guitar player, and the rest of the band maintained a relationship based on mutual respect for one another's work. When the split with Dimitri happened, they had a few songs lying around that they wanted to put on the full length, but they didn't want to sit on because they didn't know how long it would take them to find a new singer. So, I guess they approached Mike about putting an EP out on Ipecac, it was originally going to be instrumental, he wrote back in an e-mail saying "if you need anybody to do vocals," so everybody was pretty psyched. We gave him total control creatively in terms of vocals, we demoed the music separately, and sent it to him. We were all over the place, so it took us a while to get in the same room together, it was a process of sending the tapes back and forth, until we were satisfied. Then we get off the System of a Down tour; we get in the studio and recorded it. We were extremely happy for that. Personally, as a vocalist, it opens up a lot for us, because it gets people to hear us do different types of stuff over this type of music, instead of just screaming. That gives me creative liberty to do pretty much whatever I want on the next EP and not having to worry about, you know what I mean, criticism."


"We'd been friends forever, but they were between singers and asked me if I'd be interested in working with them. At that point, I think I already had a record or two out with Fantomas, and I didn't know if I could join another band that was going a thousand miles an hour like that. So, I was a little hesitant at first. But when they said it was just gonna be an EP, I said, 'Great, let's do it.' I just wanted to make sure I wasn't leading them on in any way. But I love those guys and we're talking about doing some more stuff together, especially me and Ben [Weinman], the guitar player."