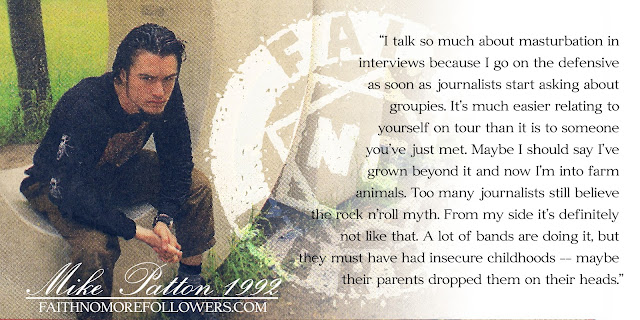 Ten Minutes in the Mind of MIKE PATTON

Are Faith No More gigs a religious experience for you?

'No, but I wouldn't know one. I was raised very godless, we never went to church. I've only ever been as a tourist, in order to look at the stained-glass windows.'

Why do you go so mad on stage?

'I always feel a need to provoke, especially if we're supporting some band like Guns N' Roses and people aren't really listening. By insulting them, you make them at least look: it's the lowest common denominator. When I do flips, I always land correctly, I only bruise myself. But I do have an ongoing fight with glass which I keep losing. Once my arms were flailing and I cut four tendons and the main nerve in my right hand. It's practically numb now.'

Do you work out?

'Right now I'm eating broccoli soup with a big piece of greasy bacon and loads of coffee. I used to work out 'cause my father's a coach, but it takes so much effort on the road to do something constructive and not abusive. I'm not a big drug taker, but I'm hooked on coffee and I never get enough sleep. The whole thing with being in a band is the sheltering of the artist, creating a dependency on the people hired -- like a whore and a pimp. I always want to meet people -- that's what traveling is about. I could stay locked up in a hotel room at home.'

What's the most rock n' roll thing you've ever done?

'Jesus Christ! That's a bad question! Um ... When I was staying in a hotel room once, I took a shit, rolled it into a ball and put it in the hair dryer so that the next guest to dry their hair would get hot shit in their face. Ain't that rock n' roll? I do hope rock stars are a dying breed. People love to lap them up -- you know how something always tastes better if you swallow it quickly.'

Do you prefer jerking off to having sex?

What are you reading at the moment?

'Homeboy by Seth Morgan, which is fucking brilliant. I read slowly 'cause I have to dog-ear a page every five or six pages 'cause I want to steal bits. I'm also reading The Diary of a Rapist by Evan O'Connell. It's a day-to-day notebook, mostly of his thoughts so far.'

How do you feel about the presidential elections?

'I didn't file an absentee ballot; I guess I should have. Everyone's been laughing at presidents for the last ten years -- with two actor-clown figureheads. Perot is a businessman, his approach is brilliant. It's refreshing: he seems to be pretty much on the ball. Have you heard of Jerry Brown? His angle was to appeal to and for the arts, he did an advert with Chuck D. He's very pro equal rights. But someone like that is way too cool for the U.S. Bill Clinton is very slick, very scary. He could be a televangelist, he could sell you your mom's underwear.'

Where were you during the LA riots?

'In San Francisco, but we had to go to LA a few days after to mix a record. We rented a car and went down to South Central, where all the trashing seemed random. In Frisco people were marching in the streets, and the police shut off whole blocks and arrested everyone -- even 75-year-old men and their dogs. The whole event wasn't inspirational, but it's still good to see a crack in the surface of the country -- you can only hope that everything bad will fall into it.'

Can you imagine living in another country?

'Yeah, South America, even though it's a strange police state. In Brazil, the police are bored out of their minds, they can do pretty much anything. Who's to say what you or I would do if we were given a gun? At one gig, our drummer was wearing a police vest which they made him take off. I said something in Portuguese about "shove it up the police's ass" and they came looking for me later, so I was sort of in hiding.'

'I speak gutter street bullshit slang Portuguese which I learnt off friends, but I'm learning Spanish. California is so close to Mexico, English is almost becoming a second language. Plus I live in a predominantly Hispanic neighborhood. I'm teaching myself using flash cards and a dictionary. Some of the band speak a bit of Spanish too, so we insult each other in it.'

'I don't dream at all. But I used to have this nightmare about going to jail and having to tell everyone -- teachers, people from the past. I've never been in big trouble with the law, so God knows where it comes from. On a literal level, I worry about hurting myself really bad or going to the doctor and finding out I couldn't drink coffee anymore. I'm a coffee fiend.'

What makes you laugh?

'What a nebulous fucking question. Ha ha! I saw two people in a bar recently, really drunk and flirting with each other. My first instinct was "Oh my God!" 'cause I knew one of them. They were sitting on high bar stools and they were learning forwards, just about to kiss, when they fell off and crashed to the ground. Justice!'

Can we print that? Axl probably won't see it anyway.

'Oh yes he will. He has Axl policemen checking things like that for him.' 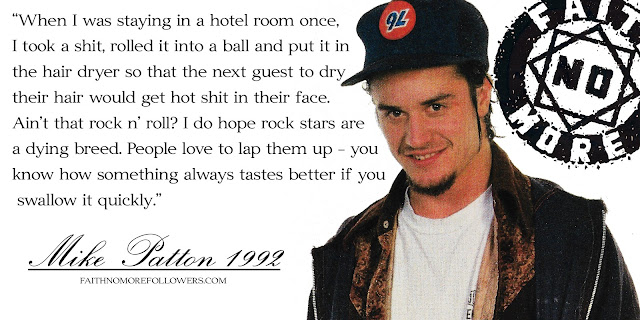