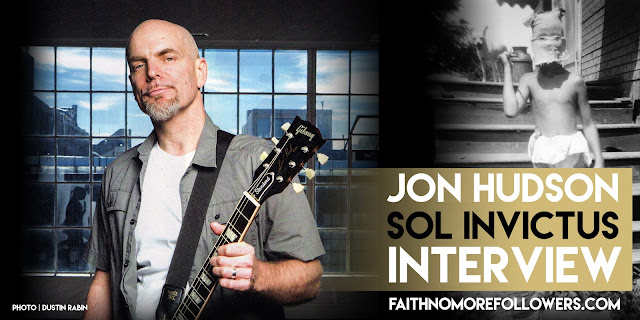 It's with great pleasure we give you the first fan page interview with Jon Hudson.


2015 proved to be a hell of a year for Faith No More. Riding on the success of Sol Invictus they performed one outstanding show after another. Their DIY attitude to promotion paid off and not only was it a amazing time for us fans but the band seemed to enjoy every minute of their journey also.

On the new album we heard some of Jon Hudson's finest work with FNM, and during the last 18 months we have finally got to spend more time in the company of the guitarist. He has been involved in interviews, the focus of great articles in various guitar based publications, and of course the subject of an episode of 'tour talk'.

Now the dust has settled we caught up with Jon to discuss his personal experiences of Tour Sol Invictus, the first FNM album in 18 years and what's next..... 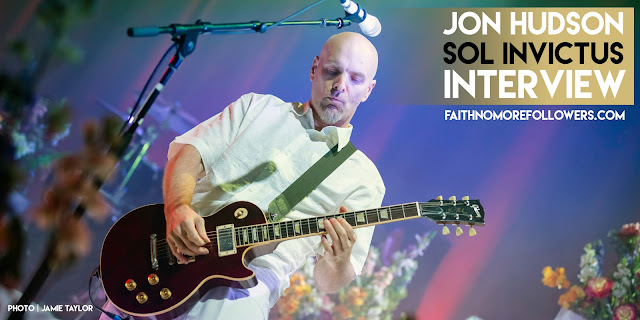 With the new album came the media coverage FNM had been so careful to avoid since the reunion. You have taken part in more interviews since the beginning of 2015 than ever before. Are you enjoying speaking for the band?

I don't recall having that busy of a press schedule, but since I don't make a habit out of reading the interviews we've done, I'll take your word for it. The circumstances were different last year, and we finally had something else to talk about, so that was a plus. Eventually, though, it becomes tough to answer the same questions without repeating yourself verbatim, which means that I'm good for about one interview at the most.


'Sol Invictus' has been a real success, bringing the band much respect and attention. FNM have possibly never been so popular. How does it feel?

Well, the success with the new album is largely due to the support and dedication from the fans everywhere who really make it happen for us. We're continually reminded of how fortunate we are in that regard no matter where we end up on tour. It isn't something that we take for granted. As for the rest of it, I don't think that you'd want to put too much emphasis upon whatever accolade or praise that comes your way. You have to be your own guide and determine whether or not something has met your expectations. Besides, the next time around, you might only be getting brickbats for your efforts, so you need to rely on your own judgment throughout.


You and Bill continued to write together during the 11 year hiatus, did any of that material make it onto 'Sol Invictus'?

Nothing from that time period ended up on the album. I'm glad we worked on it, regardless of the outcome. We put together a batch of songs that had potential, but the project didn't develop much beyond that, so we shelved it and that's where it belongs. There's no reason to work backwards into the old stuff that never quite made it unless you appreciate running into some of the dead ends that you previously encountered.  At best, it might give you an idea for something new that actually works, so perhaps you always hold onto it in some form or another.


How would you describe your songwriting relationship with Bill and the other members now?

I don't think that much has changed over the years, honestly. I'm sure that I was the first to state in the press last year that I didn't bring any songs to the table. By the time I became involved in the process, there was already plenty of material to work with. It would've been counterproductive to try and finesse some of my songs into the mix at that point, so instead, I jumped in and began working on everything else that we had. That's simply how it worked out this time around.


'Sol Invictus' does not over emphasize any instrument yet each plays a vital part in the song construction. Is this something, as a band, you consciously set out to achieve?

I'd say that that's an inherent part of the band's aesthetic - to include only the important information. We're just trying to make the songs flow well from start to finish without allowing anything that isn't essential to get in the way, but the emphasis itself isn't a major consideration. It ultimately boils down to getting the arrangement right for the song.


This was your first time working with Matt Wallace. What do you think to his treatment of your guitar sound?

I wasn't around for it, so I couldn't tell you who did what during the mixes. Bill had a fairly particular idea for how he wanted everything to sound on the record, so I'm guessing that he had his hands on it first at the desk, but either way, the result through their collaboration was great; I was more than satisfied with the overall sound of the guitars and how they fit into the mixes.


Are there any particular songs on this record that you are proud of more than others?

I think it’s fair to say that the songs that made it onto the album represent our best efforts, and also that they translated as well as we'd aimed for, so I'm proud of all of them. For me, Black Friday ended up being the real sleeper of the record. It just came together so well at the end - it’s one of my favorites on the album.


All the others members have spoken in detail about what this album means to them. What does it mean to you?

The album represents another chapter in the story, right? To have continued touring in the absence of anything new would have veered off into territory that nobody wanted to find themselves in: rehashing the good old days. I don't hear this album going in the direction of the ones that preceded it, so in another sense, it's about moving forward and refusing to be constrained by the past.


After so long playing the old material it must have been a welcome change to fill the set with new songs?

Again, it was necessary to have something new, and so for us with this release, it's like going back to school. Initially, we're feeling our way through the new stuff until it becomes as comfortable as everything else or at least in the ballpark. It doesn't take long until everything settles in, but in the interim, it's keeping us on our toes. It's informative as well; it's our first chance to get that perspective on the material outside of the studio.


How does touring differ now than it did in the 90s?

I don't feel like there's that much of a difference. At the risk of stating the obvious, you're connected like never before; you're never that far removed from everything going on at home, and you're capable of managing it much easier than before, so you're essentially bringing all of it with you on tour, so to speak - at the airport, in a hotel room, or on the bus. What else is new? The emergence of those selfie sticks at the festivals?


Are there any shows from tour 'Sol Invictus' that stand out in your memory more than others? If so why?

Concord Music Hall, Chicago - It was cool that the band finally got in more US dates and several in Canada as well, and this particular show, with the crowd making all the difference, set the tone for the others that followed on that leg.

Hellfest - Hard to top in its variety: L7 or Scorpions? Killing Joke or ZZ Top?

Red Rocks Amphitheater – Every bit as visually spectacular as reputed and beyond.

Aftershock Festival – The performance was right up there with the best on the tour. It was a fitting way to round out the year; it was exactly how I'd hope to see things draw to a close after a year like we'd just had.


How are spending your time at the moment? Are you writing?

Actually, I am working on a few ideas right now. It's something that I wanted to focus on after the tour ended, so it's a good place to be in. I'll probably take stock and see what comes of it sooner rather than later, so we'll see. 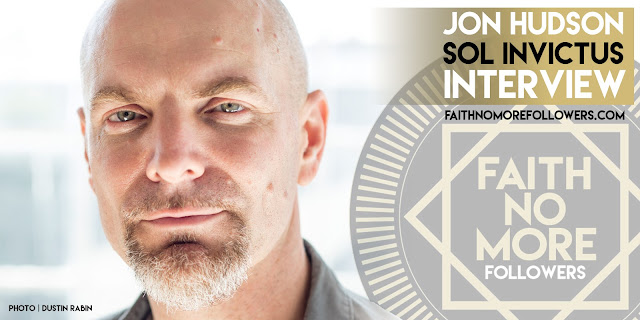