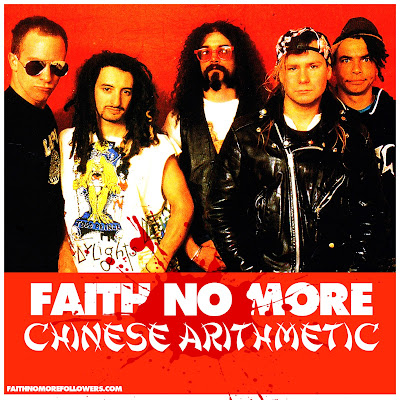 Former Faith No More singer Chuck Mosley embarks on the Reintroduce Yourself Acoustic Tour this week.
We thought it a great time to post an article about a song from the Chuck Mosley era....


'Introduce Yourself is a tremendous piece of work, unpredictable, explosive and unclassifiable. There can be no denying Mosley the eerie, haunting and melancholic spectre he managed to throw over the album with his lyrics'


I discovered Faith No More in early 1990 at the age of 13. I was 'introduced' to them by The Real Thing. Quickly I became obsessed with the music and the band, and of course with charismatic frontman, Mike Patton. With new found influence of the man and the music I followed his fashion by wearing cut off trousers, a waistcoat and (unfortunately) a bumbag in imitation of my new hero. It was while I was dressed in my 'patton-wear' and my six sizes too big 'You Fat Bastards' T-shirt hanging past my waist, that an older guy with long greasy hair, a baggy ripped jumper and doc martins stopped me:

'Who do you think you are? Mike Patton? Not cool kid, Chuck was better!'

As he predicted I had never heard of Chuck Mosley and naively dismissed the comment. It wasn't long however before I was enlightened, and was loaned a copy of We Care A Lot on vinyl. I was yet again 'introduced' to a whole new side of my favourite band.

To me Patton FNM and Chuck FNM are like listening to two separate groups entirely, where each singer brings something completely individual and unique to the music mix (this is also true for the later guitarist situation). It's not a matter of just the vocals being dissimilar; the whole dynamic of the band changes creating a clearly different overall sound.

Chuck has a very distinctive voice his tones are low and haunting. He can be soothing and melodic then brutal and rhythmic. He is always powerful, bewitching and unmistakable. His voice is punk with a hint of soul, blues and metal; on occasion reminiscent of David Bowie, Ozzy Osbourne and Joey Ramone. There are also shades of early urban music in Chuck's vocals such as Public Enemy and Del La Soul. I'm analysing from my own experience here, because let's face it, it's hard to liken Chuck to anybody! Safe to say he was ahead of his time and presented us with a new style that paved the way for 'rock/rap' with many of the 90s alternative rock scene citing him as an influence.


'l turn the radio on now and every second or third song l hear is an imitation of me.'


There are a few similarities between Chuck and Patton's obviously different voices. Both can switch between melody and rhythm with ease. Both have extraordinary vocal power. And of course live on stage both are comical maniacs and genius frontmen who can engage any audience.
But in all honestly you cannot really compare the two singer's talent much further, they are just so authentically themselves.

Faith no more's album Introduce Yourself is a testament to the skill and song writing ability of the band. I like the visualisation of these six friends (Matt Wallace and FNM) putting the album together with sweat and passion in a dark room hidden somewhere in the San Francisco suburbs. Even though the sound is dramatically different, familiar FNM elements from the later albums are there in a more primal and raw guise.
Chuck's witty and satirical lyrics are a clearly different to the words of Patton, it's almost like Chuck is spilling out lines from the pages of his diary onto the musical background. He uses everyday street language mixed with aggressive statements and poetic grace.
From the outset Introduce Yourself  'kicks and screams', then gently puts you at ease before jabbing you in the guts yet again. The engineering is meticulous, shaping a slick, defined and complex sound. A sound that was so unique critics had to create a new genre to pigeonhole it, 'funk metal'. There is still signs of Matt Wallace and the five musicians learning their trade and discovering their skills, this however adds to the appeal.


On this album the song CHINESE ARITHMETIC stands amongst the list of all time FNM greats.

Chinese Arithmetic has those tribal African beats that make Mike Bordin a drummer unequalled in his field. The rhythm is recognisable from the first snare hit, a rarity in music that a drum track can define a song. His snare sounds like the crack of a whip and his impeccably timed tick tock percussion adds a groove and swing to the song. Coining another phrase the media have used when trying to describe the album, 'Dance metal'.


'I've always been into African beats and styles for their intensity, and slowly I think the other guys got to see that there's a lot of power in that style. Bill's picked up on it too and certainly makes for a stronger song'


Bill Gould's initial riff is killer as he slams his fretboard, and it soon becomes a pulsating bassline evoking images of a train rolling down the tracks.
Roddy Bottum's subtle melodies swell in and out with a dreamlike omnipresence, providing a background for Jim Martin's guitar to play over. The guitar creeps in slowly before bursting into sustained glorious chords. After which we are treated to a classic Jim chugging riff tight with the bass.
The vocal line is a perfect example of that ability Chuck has to shift between melody and rhythm. The backing vocals from the band drop in here and there to accent particular words a technique commonly used  in rap music.


'We got the same ideas, we got the same old fearsThey're different colors sometimes, but, hey, who cares? Just years that tears our lives apartJust like the time that you tried to teach your cousin to walkHe couldn't do it-push!-you told him twiceWell, I do man but it just don't jive'

The lyrics written by Chuck are of that personal nature that make us believe them whole-heartedly. They seem to refer to a romance that ends in disaster. Maybe recalling someone attempting to steal a girl from him. Like a lot of his lyrics the 'distinction between love and hate is next to nothing', Chuck himself describes this as an 'obsession song'. The title alone is from the phrase when 'something is hard or complicated, it's like Chinese arithmetic', possibly referring to the complex nature of relationships.


'The title Chinese arithmetic was born when my friend, george used the phrase to describe how hard a certain body part was, and i thought, 'how wonderful a description.' I decided then and there that that would be the title of the very next song that needed one. It just so happened that it fits the lyrics and subject matter of that particular song to a tee. imagine that.'


'I think all the emotions and themes came from the emotions of the music. ...but I can't really read into my lyrics too well because I just piece them together. I mostly write shit that suits the phrasing I wanna use'


Speaking of relationships during the writing of Introduce Yourself FNM had that love/hate tension surrounding them that always contributes to songwriting throughout their history. So we can never rule out the emotions of the environment the band were in at the time when analysing any of their work. With that in mind these lyrics could actually be about the relationships between each other.

Of course this song has earned it's place in FNM's set and was still there in 2010 on the Second Coming Tour.
Mike Patton sings the song in his own fashion, and it's awesome, particularly from those early Real Thing tour dates. It is one of those infamous moments where Patton adds a snippet of a chart topping pop ditty of the time; Madonna Vogue, Technotronic Pump up the Jam, The Going Gets Tough From Get Go by Ween and more recently Lady Gaga Poker Face, Lily Allen Fuck you and Black Eyed Peas Boom Boom Pow.
I remember Patton launching into Poker Face in 2009 at Download Festival, me and my friends were laughing and watching with awe as he used his voice like a human turntable. But looking around there were a lot of confused faces, some almost looked offended!


Lady Gaga actually had this to say about her words being included in a FNM live performance.


'Faith no more covered poker face. I can now die a happy woman. Such a huge fan.I love Faith No More! Their song 'Epic' was my burlesque number at the bar I used to work at! I used to fog myself and dance to it. When I found out they did 'Poker Face,' I was like, 'Shit!' ' .


And Mike Patton spoke on the subject saying this:


'With these live shows, whose idea was it to include Peaches & Herb and Lady GaGa covers into the set? [laughs] I don't wanna take complete credit, but… Look, it's something that happens. It's not something where we sat down and said, 'Hey, let's do a Lady GaGa cover over one of our tunes.' It just kinda happens. A lot of that is my responsibility. We played a certain set of music for a long period of time, and it's only natural to get a little complacent. So, to me, what's fun is injecting other people's tunes over the top of our tunes. I guess it's a live mash-up, if you will.'


There is also great performance of the song from Brooklyn in 2010 where beatbox king Rahzel joins FNM.
Although Patton has made the song his own on stage in the last 24 years the emotion that Chuck expresses in those lyrics on the album is much more convincing, it was his experience and his song after all.

This song and those on the band's first two albums could never have been recorded by anyone else other than Chuck. The 'early days' in FNM history are where they forged their pioneering style of music and what they built their later success upon.

Chinese Arithmetic remains my favourite song from FNM 1987, it still stirs those emotions of anger and lost love in me as the chorus kicks in. The energy and spirit of the track give me goosebumps every time I hear it and feel it.

In summary a great piece of music with a great singer. And if that greasy punk dude hadn't abused my dress sense all those years ago I may not have discovered the song, the album or the singer for a long time after I did.

Thanks for reading folks, and thanks to Chuck and Doug for their help.