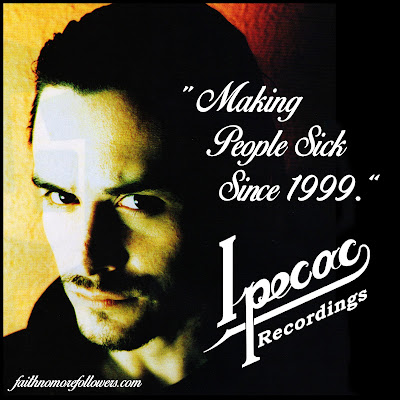 Today is the 17th anniversary of Ipecac Records.

When alternative rock pioneers Faith No More split last year, frontman MIKE PATTON had spent a decade sticking two fingers up at the music industry. With a new band that sound like an 'extreme metal wet dream' and a record label dedicated to all things weird, he's not about to stop now...

"This guy had his legs amputated as a kid. But I guess the doctor screwed up and did it when it didn't have to
happen. So he grows up to be this really bitter guy and gets revenge on the doctor who did it to him. Lon Chaney, who played the guy, strapped himself to this harness where his legs were behind him under a trench coat, and he was walking on these stumps. It's called 'The Penalty' and it's pretty old."
Mike Patton has been watching a lot of films recently. As the singer toys with a delicious mixed seafood salad in a food bar deep in San Francisco's Downtown district, he smirks in recollection at this particular slice of seedy celluloid.
Typical Pattern, you might think, revelling in stories about amputees and pain. This is, after all, the twisted miscreant who fronted Faith No More for a decade before they split last year. The same Mike Patton who shattered his own reputation as a pin-up boy by regularly drinking his urine from a shoe onstage and shitting in hotel hairdryers for fun. The same Mike Patton who has reputedly spent the last decade being one of the most awkward, uncommunicative, downright difficult buggers on Planet Rock. Right? Wrong.

Faith No More might be dead and buried, but Mike Patton - happy, relaxed and angst free - is a busy man. He currently has three projects on the boil: Mr Bungle, the sideband he fronted throughout his years with FNM and whose third record he completed yesterday; Fantomas, the outfit he put together with ex-Slayer drummer Dave Lombardo and Melvins mainman Buzz Osborne; and a collaborative album with Japanese sonic terrorist Merzbow.
And then there's Ipecac Records, the label Patton formed with a friend named Greg Werckman. As well as Fantomas' self-titled debut album, Ipecac are also putting out a trilogy of records by noise legends the Melvins - one of which will include a cover of 'Smells Like Teen Spirit' featuring 70s teen-popster Leif Garrett. Future Ipecac signings are rumoured to include The Jesus Lizard and psychobilly lunatics The Cramps. Mike Patton, it seems, is still thumbing his nose at the mainstream music industry.
"I think a lot of people are already saying, 'Oh, it's going to be one of Patton's noise labels'," he sighs. "That's certainly not what I want to do. I don't wanna do a noise label just for me and my avant garde buddies. I'm excited about it because it can be what it wants.
"Ipecac really only came about because we couldn't find anybody to put the Fantomas record out," he continues with a chuckle. "When everybody heard the band's line-up they got a hard-on. But those people with hard-ons walked out of our live show with limp dicks, and we didn't hear back from any of them. Then Greg talked with me, and it became something I had to do with him.
"As much as I've pooh-poohed it over the years, there is a community of people I like to work with, whose music I love and who are friends."
Over the past three years, Patton has managed to slowly whittle down his connections with major labels. And once the aforementioned Mr Bungle album is delivered to Warner Bros, the last of those ties will have been severed.
"Actually, Faith No More still owe (former label) Slash an album," he corrects cheerfully. "So technically, if I wrote the next 'Louie Louie' they'd own it, but they haven't wanted anything I've been doing. There's a fixed time limit on that - and believe me, I'm counting the days."
Ah, Faith No More. When it was announced in April 1998 that the band were to split, people were surprised but not shocked - this was, after all, a band who seemed to thrive on creative tensions. Patton has never talked publicly about the split before, but he's more than willing to reveal what really happened.
"The thing is that the band had to break up, otherwise there would've been all that anger garbage. It was very civilised: we decided together in one room. The thing that was amazing was that we all turned that page together. I was afraid there would be people disagreeing that it was time to end. It was almost a let-down!
"It was great while it lasted, and now we can treat each other like human beings. We don't 'have' to get along perse. Me and Bill have even talked about working together again. We're not enemies, we don't hate each other, and that proves to me it was the right decision."
Hang on. What about the legendary animosity between the band members?
"No, that was all bullshit!" he retorts. "We just didn't lie to each other. We were one of the few bands that told it as it was. If I was mad at Jim (Martin, former guitarist), I'd call him an asshole in front of everyone. If he was mad at us, he'd call us assholes. That's just the way we were. We didn't give the press a whole lot of angles, so maybe that's all they had to work on us. It was never what it was made out to be."

At last year's Kerrang! Awards, Deftones vocalist Chino Moreno paid tribute to FNM as the band who inspired him to become a musician. But while Patton himself steadfastly refuses to accept the notion of a Faith No More legacy, there's no
doubt that the band inspired the cross-pollination of musical styles "That's a very optimistic outlook."
The other one is... "The other one is that we spawned an awful lot of shitty bands," he grins. "I've been told that before, and I generally try to just shrug it off. Most of the bands they mention I don't like at all, and I'd hate to take credit for what they're doing."
What do you think of Korn, the Deftones and their ilk?
"I knew you were going to ask that," he laughs. "I think you have to have a very vivid imagination to link them and Faith No More. Maybe you could to our first two records, but I think we ended up in a different place to what those bands are doing. Whatever it is they are doing."

These days, Patton seems happier than he has done in a long time. He enthuses that Fantomas is his own "extreme metal wet dream", and hopes that Mr Bungle will continue
his track record of surprising people. "When I started writing 'Fantomas', it came from frustration. I wanted to make a metal record that I would buy. I timidly called Dave Lombardo, almost apologising for the music, telling him that I didn't know if he'd be into it. He called me back, saying, 'It's incredible, can't wait to play this'. Some kids will like it, others will think it's artsy-fartsy horse-shit.
"With Bungle, it was trying to make our version of a pop record - more streamlining of stuff, not improvising, having structure. I hope as many people like it as will allow themselves to."
Not that Mike Patton is overly worried about approval ratings. He's just delighted to be free of snooping, corporate fat-heads and the associated bullshit that comes with them.
"It's nice to own your own music and not have to answer to anybody," he grins. "It's even better not having people breathing down your neck. I mean, it's a pleasure, for Christ's sake." 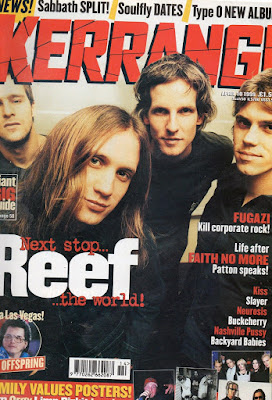