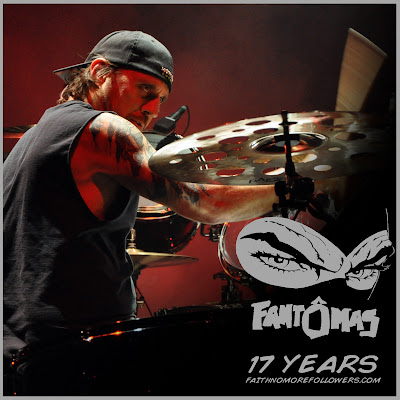 One of the reasons for taking the step from performer to music executive was to enable him to put out an album of his extreme and aurally challenging ideas. Patton enlisted longtime friend and collaborator Trevor Dunn for bass duties and The Melvins very own Buzz Osborne to play guitar and realise his twisted musical project.

Who better to turn to than the legendary 'godfather of the double bass drum' Dave Lombardo to provide the brutal and intricate drum track needed. Fantomas was born, albeit a rather awkward and unruly child.

Later this month we will celebrate the 17th anniversary of their debut self titled album. A record which still stands as a terrifying testament to the mind of Patton and the skill of these four musicians.

Dave, who recently made it onto Rolling Stone's '100 Greatest Drummer's Of All Time', kindly agreed to talk with us about this amazing album and Fantomas. 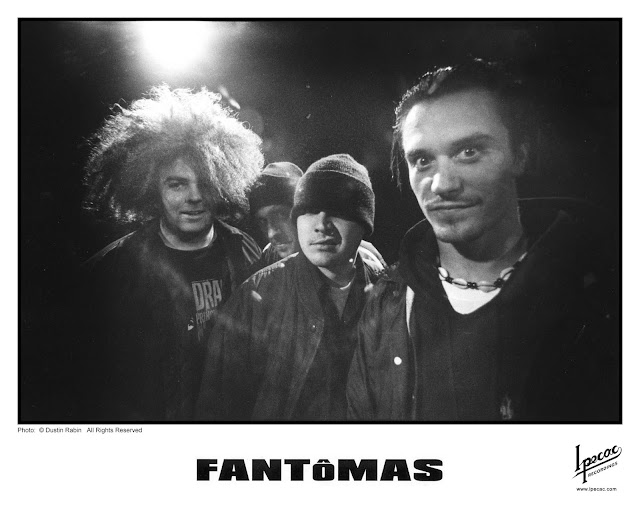 How did you come to be part of Fantomas?

I received a phone call from Patton asking me if i was interested in learning this music which he described as short pieces of music flowing like a comic book.

The album concept seems to be a comic book soundtrack, is this an accurate
description?

What were your initial reactions to the music Mike Patton presented you with?

It was exactly what he described over the phone. I was surprised that I completely
understood it given how complex the movements are, but it made sense to me. When I received the cassette with all the music I wasn't only intrigued, but blown away at how complete the demo was. He could have released it as as.

Was recording such a unique album challenging and if so in what ways?

The challenging part was learning the music and deciphering all of the details. It's amazing how much music you can fit in a short period of time.  When we were rehearsing, there were days that we would spend two hours on three seconds of music. It was intense.

How did the production process work, were you all in the studio together or were parts recorded separately?

We rehearsed all the parts and recorded them together.

How does it feel to play this music live?

This music feels great to play live. It flows perfectly and feels like an extension of my music personality.

When was the last time you listened to the album? How does it sound 17 years
later?

I listened to the album just a couple weeks ago. It still sounds amazing to me. I recently received the Fantomas / Wunderkammer  collection. It sounds incredible on vinyl.

Ipecac Records was initially created to put out the record. Did no one understand what you were trying to do with the music?

It made sense for Mike to release that music on his own label, no one but Patton would know what to do with it. I wouldn't of given that masterpiece to anyone else.

How do you find working with Mike Patton?

Working with Patton is always an amazing experience. He has a very high creativity level that is hard to find in other musicians.

Patton and Trevor Dunn have often cited Slayer as an influence. Do you think working with those you aspire to creates more interesting music?

Absolutely. It challenges you to be a better musician and to take more risks.

Fantomas returned to the stage in 2014. Can we expect more shows in the future?
Maybe a new album?

I hope we work together again. Time will tell...

Thanks Dave. Check out his newest project DEAD CROSS on FACEBOOK.