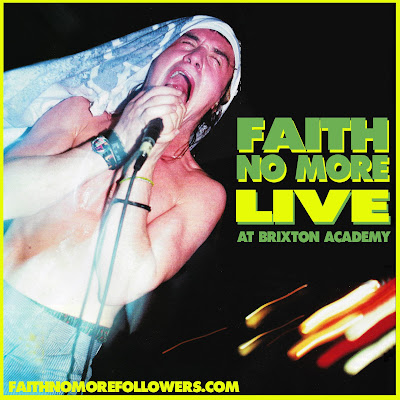 26 years ago Faith No More played at Brixton Academy in London.

This momentous show was filmed and released as 'You Fat Bastards' in 1991.

Whether or not you appreciate the vinyl, there's no denying Faith No More are one of the most compelling bands to hit the live circuit recently.Their ingenious hybrid of rock, rap, funk and the odd classical break is transformed into something magical on stage, while the crazy showmanship of singer Mike Patton — as unpredictable a character as former vocalist Chuck Mosley — makes the show visually as well as aurally exciting. Brixton was packed and heaving, but its all starting to look a little bit too easy. The 10-legged music monsters songs — including hits 'We Care A Lot', 'Epic' and 'From Out Of Nowhere' — are so strong that the band scarcely had to try and there was the sense of a mere run through. It was only the more offbeat moments — snatches of 'Pump Up The Jam' and 'Street Tuff', the reflective cabaret of 'Edge Of The World', and the stonking encore of Black Sabbath's 'War Pigs' — that they really lit up. Faith No More need a break from touring before they become victims of their own success. Especially as, even on half power,they still blow the rest out of the water.

From Out Of Nowhere
Falling To Pieces


Underwater Love
As The Worm Turns
The Crab Song
Edge Of The World
The Morning After
Chinese Arithmetic
We Care A Lot
Surprise! You're Dead!
Epic
Woodpecker From Mars
Zombie Eaters
Why Do You Bother?
War Pigs (Black Sabbath)
Easy (Commodores)