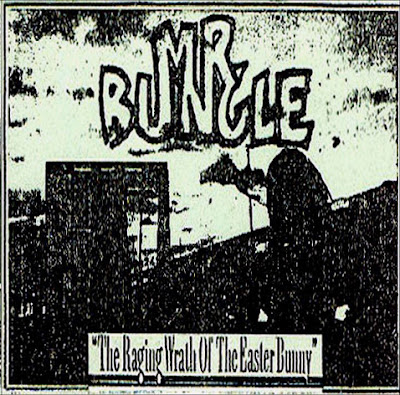 During Easter 1986 Mr Bungle recorded their first ever demo cassette, The Raging Wrath Of The Easter Bunny.

This demo played it's part in Mike Patton's history not only as the very first recording with Mr Bungle, but it was also the very cassette that Patton handed to Mike Bordin at a Faith No More show on October 4th at Humboldt state university in Arcata. Read the full story HERE.

"It started out as a metal band. The first time we jammed, we played classic hits of the Big Four, you know—Megadeth and Metallica songs. Then we started writing our own. Our first demo was total death metal, basically. But at the same time, we were all interested in different kinds of music. Trey and I were checking out jazz and classical. Patton was into all kinds of different stuff, too, and eventually we got burnt out on metal and started doing other weird stuff."


"It was 1985 when we started. We were in rival death metal bands. Jed and I were rivals with Mike and Trevor. Trevor and Mike got kicked out of their death metal band because they wanted to shave their heads and call it Turd. So we just sort of merged (okay, over fifty words) into this one band and we called it Mr. Bungle."

"That whole thing (Mr. Bungle's music during the RAGING BUNNY era), it was something that became sort of common later, sort of having a sense of humor about death metal. But at the time we were the first."

This (let's just call it an album) album offers a dark goth instrumental (Grizzly Adams), a silly ska/metal crossover (Hypocrites, an awkward attempt at cramming as many styles in 3 minutes as possible (aforementioned Evil Satan), and five delicious contemporary metal pastiches. Especially those well acquainted with Mr. Bungle's later work will love hearing these young virtuosos shamelessly quote Slayer and other such bands. The fun and humor are evident, if only for song titles like Spreading the thighs of death and Anarchy up your anus, but the talent is just as obvious - the songs are mostly well-composed, epic, varied, ingeniously performed, punch-packing, basically all that one would look for in metal songs that cross the 4-minute mark.

And yea, the production is utter crap, done by a 16 year old Trey Spruance using a 4 or 8 track tape recorder. As one of many results (such as an inaudible snare drum and LOTS of static), the lower (nickel wound) strings of his guitar make a little 'ploof' sound when struck. I absolutely LOVE it - somehow, it alone gives the music the perfect amount of goofiness. 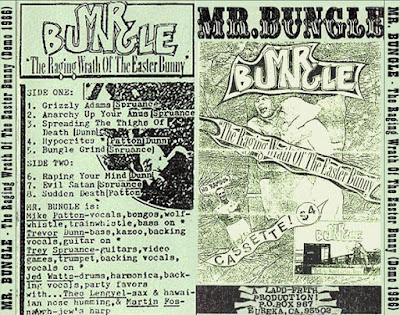 EUREKA -- Pee-Wee Herman says Mr. Bungle is the man no one would want to be like. Herman's character is the fellow who cuts in front of people in line and does other rude things.
Maybe no self-respecting person would want to be like Mr. Bungle, but a local group of musicians in their late teens took his name when they formed a band a year ago.
You haven't seen Mr. Bungle playing in clubs like the Old Town Bar and Grill or the Jambalaya because they used to play what they admit was "inaccessible" music. The young, outspoken bandmates describe their old music as "speed-thrash metal," "music to fight to," and "a fast cartoon."

Fights used to break out because "a lot of our music appeals to heavy metal and punk people," vocalist Mike Patton said.

Those two distinct groups often clashed at Mr. Bungle shows at Eureka High School, the Bayside Grange and HSU.
Mr. Bungle figures its audience might mellow out now that the band has changed its music. Mr. Bungle is also trying to alter its image and end up playing in local venues.

"The music is totally different now ... Our new stuff is a lot easier to digest," Patton added.

Even with the changes, Mr. Bungle will probably have a battle getting booked into mainstream clubs. Nightclubs tend to favor bands that play popular Top 40 songs.
Mr. Bungle plays all originals, except for "Fire" by the Pointer Sisters, "American Pie" by Don McLean, "It's a Small World," and TV themes for Howdy Doody and Looney Tunes cartoons.
Mr. Bungle's stage act also makes the band stand out from the crowd. Band members have been known to sport a variety of odd props, including Big Loaf bread bags and dime-store novelties as hats.

"We mock ourselves while mocking everybody else," Patton said.

"It's because the world is so ludicrous," trumpet player Scott Fritz said. "It's hard to take the world so seriously."

The emphasis has always been on having fun, the musicians agreed, because they haven't made much money yet.

"We wouldn't do it if we weren't having a good time," drummer Jed Watts said.

One person who had a good time at one of their shows was Brian Ladd of the Psyclones. Ladd, who helps run the local Ladd-Frith label, offered to provide artwork and marketing for a cassette tape of Mr. Bungle.
So this year, during the Easter season, Mr. Bungle got to work. "I have a four-track mini studio," guitarist Trey Spruance said. The result was an eight-song, 35-minute cassette tape, "The Raging Wrath of the Easter Bunny." All the songs are written and arranged by the band.

Most of the titles for the irreverent songs couldn't be printed in this newspaper. Most of the experimental music will never be played on conventional radio stations.
But copies are selling fast enough that the Works charted it at No. 5 on its Top 50 sales list, above Bon Jovi and many other national acts.

Mr. Bungle has already made another tape that better represents its current musical direction. The musicians, who want to debut their ska, funk leanings, hope to use the tape to gain local and Bay Area club dates.
Even if their new music never catches on, the bandm
ates seem happy with their new challenge. "I'm used to just playing drums for heavy metal bands," Watts said. When Mr. Bungle formed he saw it as a chance to widen his musical horizons. Now, he can broaden his scope even further.
If Mr. Bungle is never welcomed at clubs, it will still entertain in halls and at parties, the young musicians agreed.

"Not at Republican benefits, though," Fritz said with typical Mr. Bungle wit.