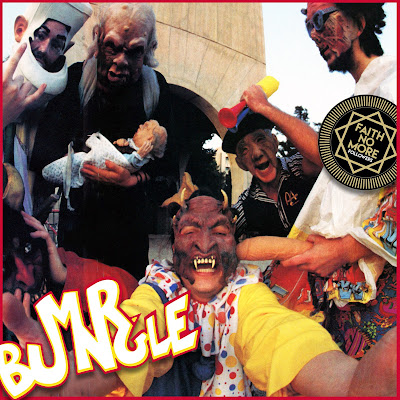 
Welcome To The Bungle
Liz Evans

YOU MIGHT recognise Mr Bungle's vocalist. Not only does he possess one of the cheekiest faces in Rock, he also sings (rather well) for a famous band by the name of Faith No More. Which, when coupled with the Mr Bungle project, has landed him in the middle of much controversy and speculation. Which band will he stay with? Can he manage to hold down two careers? How will the record company politics work out? And who the hell are Mr Bungle anyway? Mike Patton has, as we know, become famous/infamous with Faith No More, but all the while he has kept in touch with his high school pals Trevor Dunn and Trey Spruance who, along with another trio of reprobates called Heifetz, McKinnon and Lengyel, make up Mr Bungle. Specialising in Porno Rap with guitars, horns and a Funky
beat, the band are enough to upset anyone's parents, not to mention prospective record labels.

They began life about six years ago as a 'bonafide Death Metal band', but Mr Bungle have been overcome by more exploratory and diverse musical styles - as well as a devout love of the strip joints of San Francisco which have provided much of their lyrical inspiration.
"We've always been avid collectors of those sort of magazines and it started working its way into our music just before our last tape 'Ou818.' Says guitarist Trevor Dunn, "Once we were actually introduced to porn movies we decided it would be a good topic for our tunes. That's also why we do most of our shows in San Francisco, because there's nowhere to play at home (in Eureka, California). And, of course, they do have the Century Theatre with a strip joint."

With songs like 'Squeeze My Macaroni' and 'Love Is A Fist' in the Bungle repertoire, getting a deal might involve some sort of compromise. But that's nothing new to Patton who's already had to change some of his lyrics for Faith No More because they were too harsh.
"Obviously if we make an album it's not gonna be as disgusting as 'OU818'. That tape was a collection of our dirtiest songs," offers Trev.
Bungle songs have an odd musical construction and an evenstranger lyrical content. For example there's 'Bloody Mary' a male viewpoint of the female menstrual cycle, and 'Egg' which is "about relationships, dependency and weird emotional stuff like that", according to Trev.

Visually Mr Bungle cause just as much of a rumpus as they do aurally. Trev claims to have a giant suitcase full of props and Patton himself has two garbage sacks of his very own personal paraphernalia. Among the contents are football shoulder pads, a cow
head, a variety of masks, hats, skirts, dresses and stage blood capsules. With such entertainment essentials forming a major part of their show, Mr Bungle go some way to defusing any potential offensiveness - well how can you seriously be disturbed by a man wearing a cow's head?

But, the question still on everyone's lips, with Mr Bungle due to sign with one of the Warner companies (no more could be revealed at the time of speaking to the band), is what will Mike Patton do? Will he be forced to decide between the two?
"'It's been a big question for quite a while. Mr Bungle and Mike have always said that he's gonna try and maintain both bands.

Unfortunately, the Faith No More side would rather he make a decision, but he says he's never gonna leave Mr Bungle and we never expect him to."
This awkward situation means Mr Bungle have to remain inactive while Patton tours with Faith No More, which does amount to something of a handicap, but all parties are supremely confident that it won't interfere with any chance of success. As for Faith No More - well, the controversy has already arisen and died down again. but when Mr Bungle actually sign the contracts, who knows what will happen?
With Thrash enthusiast and Jazz nutcase John Zorn in line to produce the album, all Mr Bungle need now is the deal. Until then there's plenty of room for speculation and rumours. At least it gives you enough time to warn your parents. 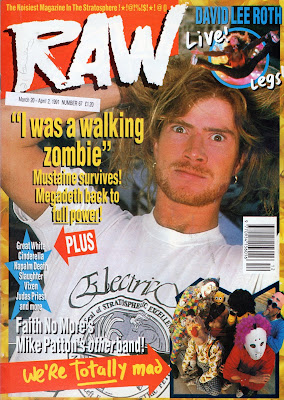