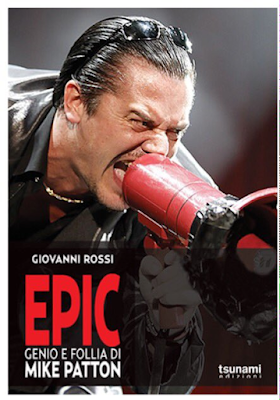 A new Italian book about Mike Patton is now available. We spoke with Giovanni Rossi and he kindly described the premise.

“Epic – Genio e Follia di Mike Patton” (“Epic – Genius and Madness of Mike Patton”) is an unofficial biography of Mike Patton. This is the first book about Patton in Italy, and maybe in the world… It’s a long journey through the incredible and unique life and career of Patton, starting from his childhood in Eureka, up until present day and the Faith No More reuinon. The book analyzes his projects, songs, compositions, his main groups (Faith No More, Mr.Bungle, Fantomas, Tomahawk, …) and his collaborations (John Zorn, Mondo Cane, X-Ecutioners, and much more). “Epic – Genio e Follia di Mike Patton” is focused both on the music and private life of Patton, investigating a lot of things about both the artist and the person, going deep into his personality and the character with anectodes and episodes from a lot of his companions. The book contains a huge number of interviews released by Mike himself during his career and a lot of interviews (previously unreleased) that I’ve collected from people who worked with Mike. This book can be very useful and enjoyable for both people that know Mike and his projects very well and people who want to approach him for the first time.

Journalist, bass player, blogger, writer, but most important, fond of music and people, Giovanni Rossi loves to write about extraordinary people in music world. From industrial to metal, his book are dedicated to some of the most interesting and unique people in music history. All his book are published in Italy by Tsunami Edizioni: “Industrial [r]Evolution” (2011), “Nine Inch Nails - Niente mi può fermare” (2012), “Roger Waters - Oltre il Muro” (2013), “Silence Is Sexy – L’Avanguardia degli Einstürzende Neubauten” and “Led Zeppelin ’71 – La notte del Vigorelli” (2014).