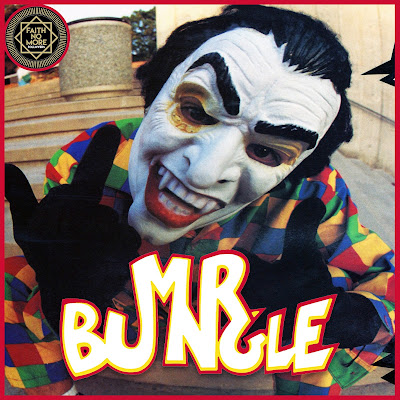 Mr. Bungle are five miserable youths from Eureka, California, who play music that sounds like Frank Zappa doing funk with a chainsaw. Their last demo tape, OU818, sold like hotcakes. This could be down to the fact that their vocalist is Michael Patton who also happens to front those hugely popular funk-thrashers Faith No More.

But although there's no disguising Patton's distinctive vocals, the similarity ends there. Faith No More and Mr. Bungle are two very different bands.

But try not to let their schoolboy humor turn you off. Musically, Mr. Bungle are in a league of their own.

Sitting in a quiet corner of a London pub, Mike Patton warns by way of introduction that a Faith No More interview is one thing, a Mr. Bungle interview is something entirely different. Starting with the seemingly innocuous question of how the band came into being, I soon realize what he means.

"It was kinda like a merger between two bands", he explains. "One really horrible gothic metal band, which our guitarist and original drummer were in, and one really horrible metal band which did Metallica covers, which is the one Trevor (Dunn, bass player) and me came from."

So how did the present Mr. Bungle, with its emphasis more on funk, emerge? " There's a hint of funk. That's not what we're about, though. I can predict that the album that we're going to put out will show that. People who call us funk after the album comes out will be shot." We're out to prove that funk is a lie.

So who or what are Mr. Bungle? "First of all we are all kids. Every other band are men -- we're kids. Trevor's my age (22), everyone else is younger. Our drummer Danny is balding -- Danny is like an old man already, on the way down the other side of the hill, crawling to his grave. Trevor our bass player and I have known each other the longest. He's real studious, sarcastic ... a lot like me actually. Have you seen Star Wars? He's R2-D2. We're all big Star Wars fans, we used to do the theme song. And I was always Darth Vader. We don't have the full get-up yet, but we're working on it. Trey, our guitar player, is Chewbacca. He's scummy ... and he has one of those William Shakespeare beards which he waxes up -- he's a fucking creep, a warthog! Most of our death metal influence comes from him.

"Theo, our alto sax player, he's C3-PO, the tall robot. He's Mr. Logic, but he's also the smelliest. Our tenor sax player, Bear, is Luke Skywalker, because he's a macho stud. Oh yeah, and Danny the drummer, the balding one? Obi Wan Kenobi. If there's a band philosophy, he's the one who'd know it."

So why decide to go and join Faith No More if things were so happy in the Bungle camp? "I didn't really decide -- it just happened. I always knew in my mind that I would do Mr. Bungle, there was never any question of that. The question was whether I was gonna do FNM, and being the dull, indecisive person that I am, it was a helluva hard decision to come to. My initial reaction was, No way! I talked it over with the Bungle guys, and I talked to my parents about it and they were positive: 'Hey Mike, make us proud!' " Patton giggles. "I'm doing this all for my parents. I admit it, I've been doing it to support their drug habit."

Over here (England), Mr. Bungle is just a name. How big are the band in the States? "We're like this layer of pus below the surface of the skin of America. It's threatening to be a zit soon! Everyone kind of knows. It's looking good."

What would you do if the time came when you'd have to make a choice between FNM and Mr. Bungle? Surely FNM's increasing popularity will soon make it impossible for you to continue in both?

"Why the fuck not?" he asks, voice hardening. "It's all the traditions people have in their heads. You can't do this, you can't do that. These things can be arranged. It hasn't reached that stage yet, and I'm not the type to worry about it before it happens ... I'm not going to say I'm not serious about Mr. Bungle, because I am. If I wasn't serious about it I wouldn't be doing this interview, or insist on still playing with them -- because that in itself gets people riled up. It's a totally separate thing, it's nothing to do with Faith No More. It's not my goddamn art project."

There's been a lot of rumours that you're planning to leave FNM once you've established Mr. Bungle -- do you want to give that one a decent burial? "Who told you that? Ha ha -- not planning to, no. I don't plan anything, do I? I dunno, I just wanna try and see how far I can push it, see what I can get away with and what I can't. You know how everyone says that FNM are the music of the 90s? Well, Mr. Bungle are the music of the 2010s!"

Next in line is Bungle bassist Trevor Dunn. If I was expecting the so-called 'studious one' to provide any deep meaningful philosophies on the subject of Mr. Bungle, I was quickly disillusioned. On answering the telephone, we exchange greetings, then he asks if I can go on hold for a minute. Returning to the line, he apologizes, "Sorry about that. I was wiping my ass when you phoned."

I try to nail Trevor where I failed to pin Mike on where the Bungle brand of music came from. "After about a year we got tired of playing speed metal and wanted to do something a little more creative. So we just stopped and started writing our own style music, which was influenced by bands like Camper Van Beethoven, Boingo, Bad Manners and kind of ska funk-ish oriented stuff. Then we added a two-piece horn and a new drummer, so now we don't really have any kind of limit on the music we play."

Fromsome of the things Mike's been telling me you have a pretty bizarre visual live show. Does that detract from the music? "I don't think it does -- it just adds to the chaos. We're into big chaos levels. Our tunes are kinda screwed up enough as it is. When you go see a live show you want a little extra, so we try and provide that. We have a whole suitcase full of props that we use. Every show we used to do, we used to have something to throw out in the audience, like used underwear ... or loaves of bread. We haven't done that in a while now. Now we mainly use Halloween masks and chew up fake blood.