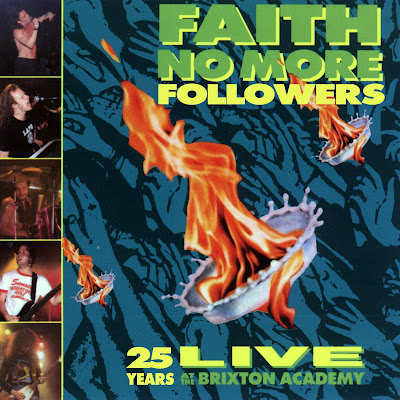 On February 4th 1991 Faith No More released the live recording of 'Brixton Academy' on CD.

Their are of course a few dates to celebrate this show, April 28th 1990 (the date of the actual perfomance and August 1st 1990 (the release date of the VHS).

The CD release of course contained two out takes from 'The Real Thing', previously only available on the B-side of 'From Out Of Nowhere' 12".

Last year Faith No More were practically a permanent feature on the U.K. live scene. At times it seemed that as soon as the lights went down on one show there wasn't even time to catch a quick pint before you were screaming for 'War Pigs' at their next. Their audiences were growing at an alarming rate-a couple of years ago their glory was to achieve to consecutive sell-out nights at the marquee. That would have been enough to keep a Cheshire Cat type grin upon their faces for a good month! But a year later that achievement paled before a list of dates that included The Astoria, Brixton Academy, Hammersmith Odeon and the Reading Festival. Popping back and forth across the Atlantic with alarming regularity, they journeyed much over the surface of Britain-wearing out a considerable amount of rubber In the process!
And so it was deemed that the rest of '91 will be a Faith No More no more year. Too much touring of Britain. Well we suppose they deserve a break. But don't despair! To satisfy our hunger London have put out a mini live album.
Recorded at Brixton Academy in April of last year it features eight live monsters. The CD version ineludes two extra tracks - 'The Cowboy Song' and 'The Grade' which have never before been widely available. Of course no live album from FNM would be complete without their habitual encore and Black Sabbath original 'War Pigs'. It's here, planted firmly at lhe end of side one, bathing in all its glory. In fact the LP includes most of FNM's finest - 'The Real Thing', 'Epic', 'From Out Of Nowhere' and 'We Care A Lot'. Capturing their essential live sound to a tee, so very well that you just want to throw your body about with the sheer pleasure of it all.
We're gonna place our ears between the speakers of two very powerful amps and blast ourselves 'till our heads explode! Then we're off to Faith No More heaven. See ya there! 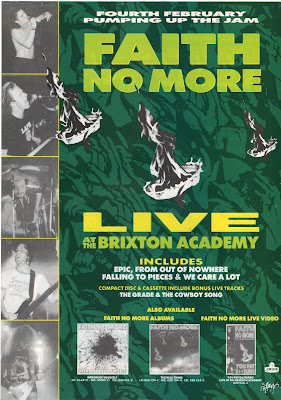