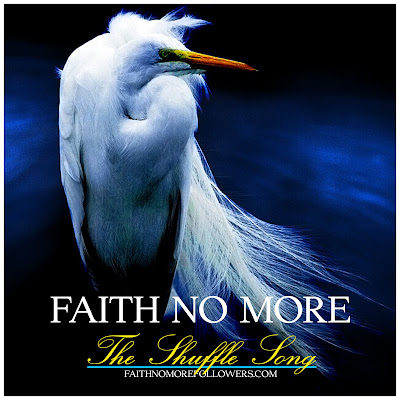 The Shuffle or Seagull Song was recorded by Faith No More during the Angel Dust sessions but has since been buried by the band who insist it will never be heard in full.

"Ha....we really don't like this one ! We don't always agree on much but we do seem to agree on this...in our minds, it was a noble attempt but didn't really work."

However an short extract of the song found it's way onto YouTube and the song has been a mystery that fans have endeavoured to unravel ever since.

"Yeah, I think that song always felt unfinished. It seemed like it missed an integral part. I don't know. I think we threw the towel in on it cause it just didn't satisfy."

Bill, Roddy and Mike Bordin referred to the song in a fan interview hosted by Faith No More 2.0, Stubbadub and FNM French Community in 2011.

With six studio albums, four with Mike Patton, do you have any unreleased music we haven’t heard yet and would you consider releasing it? The unreleased Angel Dust track for example?

Roddy: I don’t know of any stuff out there that is unreleased.

Bill: I think we’ve released most of it, even the bad stuff.  The stuff that hasn’t been released it really not so good. There’s a reason it never got out; it never really came together. Everything else we put out a long time ago.

Roddy: We haven’t really listened to stuff in a long time. A lot of the stuff we do gets dug up by people and ends up in the internet anyway.  I’d imagine there’s stuff we haven’t heard.

Mike Bordin: I have one from the Angel Dust out-takes, Code name The Shuffle song. It wasn’t ready to be done so we didn’t put it out.