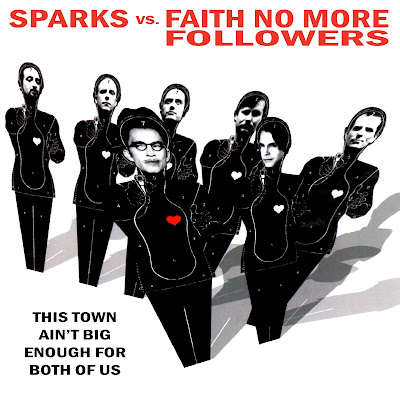 On this day in 1997 Faith No More released their collaboration single with Sparks, This Town Ain't Big Enough For The Both Of Us.


"They found out that we're fans of theirs, and have asked us to appear on their next album. That's just f**king amazing. Sparks were the first really campy operatic-type band. I always thought Queen ripped them off."


"This Town Ain’t Big Enough For Both of Us” was so atypical of the time. It wasn’t your usual verse-chorus-verse song. We’re proud of that fact. A lot of bands seem to enjoy the status quo of things, but we’ve always gone for the more provocative approach. “This Town Ain’t Big Enough For Both of Us” tries to challenge the listener, to show what pop music is capable of. We did try and recruit Brian May around that time. We met up a few times, just before Queen had really broken through in the States. We were looking for a guitar player for Sparks and he gave it some thought. He was ruminating on it, but it wasn’t to be."

Faith No More spreads the gospel. They teamed with the Maels in 1997 to record an updated version of Sparks' breakthrough single, This Town Ain't Big Enough for Both of Us, a hard rock epic about gunfight movie tropes.“We’re both real oddball outfits — and we like to push buttons,” says Faith No More keyboardist, Roddy Bottum, via e-mail. “I get the sense that Sparks put a lot of thought into their presentation and how they come across. Faith No More does too. We started employing ways to (mess) with our audience early on."Bottum's gateway to Sparks was "This Town." He and bassist Billy Gould have been hooked since they were kids. In 1975, they first heard the song on “American Bandstand.”“We were smitten,” says Bottum. “We rode our bikes up to the weirdo record store and inquired within. There was an ambiguous Bowie type rocker with earrings and colored hair who we were able to confide in. It kind of changed our lives.”Bottum says that one of his career highlights was meeting Ron and Russell for the first time.“We all happened to be in Munich at one point,” he explains. “We met the brothers Mael at a cafe that looked out on an equestrian center that schooled young teenage girls, their choice.”

Labels: 1997 Bill Gould Dean Menta Faith no more Plagiarism Roddy Bottum Sparks This Town Ain't Big Enough For The Both Of Us