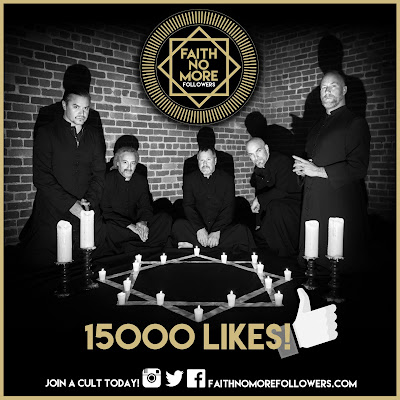 Thank you to all those who follow us on Facebook, we have now reached over 15,000 likes in less than a year.


And we also celebrating our acceptance by Faith No More as an official fan page alongside FNM2.0 and FNMblog, as a link to this page is now on FNM.COM.

Where the heck is Jim Martin? An interview with Jim Martin by Marianne Jacobsen.

Jim Martin – guitarist, giant pumpkin farmer, philanthropist and overall probably one of the coolest and most honest human beings on the planet. You might remember his greatness on a few albums back in the day with a band called Faith No More (insert sarcasm face). I got very lucky and saw Faith No More in 1992 with Metallica and GnR, so this was a very cool interview for me.

And with that…HEEEERE’s Jim Martin!

MGM: What was your first musical instrument?

Jim: Guitar is the first one documented. Got a picture somewhere 3 yrs old or so cowboy hat and guitar

MGM: Where did you grow up?

MGM: What was your first band?

Jim: First Rock and Roll Band I was 12 or 13 yrs old, just some kids from the neighborhood. We played some school dances and backyard parties. They liked playing crappy covers. I started bringing in my compositions and that is where we began to part ways.

MGM: What were some of the highlights of your experience as a musician over the years?

Jim: Jamming with some of my influences, to get close to the source like that leaves you altered.

MGM: What are you up to these days?

MGM: With veterans/ remembrance day right around the corner – can you tell me a little bit about the philanthropic work you have been doing for veterans?

Jim: A good friend of mine is a WWII vet. Marine corps pilot, flew corsairs in the pacific and Korea. I took him on a trip with the Honor Flight Bay Area to Washington DC

MGM: How did you get involved in that?

Jim: I heard about it on the radio.  it would put me right at the source, to be there with all of them, the last members of the greatest generation.

MGM: How can people get involved and help this cause?

Jim: Pretty simple. It’s a USA nation wide network. They are looking for volunteers, donors, sponsors, participants. Simply search “Honor Flight”, find your nearest hub and call them up. Their mission is to take vets to their memorial in Washington DC all expenses paid. WWII and the terminally ill currently have priority. If you know a WWII vet or terminally ill vet, please call right away and get them on the next trip.  Here, have a link: https://www.honorflight.org/

MGM: A while back you did a few one off shows with suicidal tendencies – will there be any more impromptu appearances?

MGM: You have many fans that say FNM is not the same without you.  What would you like to say about that?

Jim: I say thank you. It is gratifying to know someone remembers where it comes from.

MGM: I was told at one point you were pumpkin farming.  Is that still the case?

Jim: No, it never was. I grew some extreme pumpkins for competition, and it was not a farming operation, it was a gardening experiment.

MGM: Do you still play your guitar?

Jim: Yeah I play that fucker.

MGM: If the right situation came along would you be willing to join a musical ensemble?

Jim: That’s an “if” that makes almost any question appealing. Yeah, I guess I would.

MGM: If you could hang out with one person (besides me) who would it be and why?

Jim: HAL the computer. When I got tired of hearing it talk about itself, I could unplug it.

MGM: Do you think that music has changed since the 90s?  And is it for the better or worse?

Jim: Pop music is for little kids. The consumer thinks music sucks, they keep supporting a bunch of old shit. I think things are worse. The great recordings captured a great performance. Now the machines will do it for you, timing pitch, everything.

MGM: What is your proudest moment as a musician?

MGM: What is your proudest moment as a human being?

Jim: I don’t know yet. I’m holding out for more.

MGM: Any last thoughts from Mr Martin that the fans can chew on until the next time you come up for air?

Jim: One of the best things I ever heard : “everyone gets everything they want… I wanted a mission, and for my sins, they gave me one. Brought it up to me like room service.”

As part of their Black Friday celebrations Record Store Day released a pro footage video of Superhero, recorded a year ago at Amoeba Records in San Francisco.

The end of year polls from music publications are starting to come in, with the success Sol Invictus is likely to have we will probably post them all together. But here are the first. 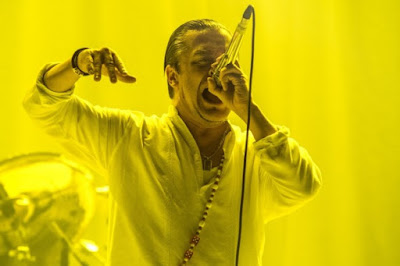 
In the 5th Annual Loudwire Music Awards, our Best Vocalist of 2015 category was extremely diverse with multiple singers coming close to a victory. When it was all said and done, Faith No More‘s Mike Patton came out on top.Faith No More experienced a fantastic 2015, releasing their first album in 18 years, Sol Invictus, to massive praise. Longtime fans went insane for Patton’s vocal approach on songs like “Motherf—er,” “Superman” and “Sunny Side Up,” while Faith No More acquired plenty of young followers through the strength of Sol Invictus.Faith No More visited many parts of the globe in 2015, bringing Mike Patton’s extremely dynamic voice throughout North America along with less visited countries such as Slovakia, New Zealand and Costa Rica.Congratulations to the legendary Mike Patton for beating out close contenders like Shinedown’s Brent Smith and Ghost’s Papa Emeritus III to win Best Vocalist of 2015 in the 5th Annual Loudwire Music Awards.

Like I was going to pick anything else. Do you not know me BUT AT ALL? There’s been more than enough said about this album and the band over the year. In fact, some may say they are overrated and boring. They’d be wrong because only published opinions are real. So here goes; this is the best album of the year. It ranges from mellow to psychotic to philosophical to beautiful to stupid, which pretty much sums up Faith No More’s career as well. The hook from “Motherfucker” gets stuck in your head and wins you over despite your initial reluctance to like it. The ghoul-chant of “Separation Anxiety” is pure atmospheric witchiness that crawls under your skin and makes you sway in public. The lush chorus of “Superhero,” interrupted by its rabid verses, is just gasping exhilaration. Every song is foreplay followed by a punch to the gut and yeah, they make you like it rough. Also, I will gladly be the gimp on any future shows. Just so you know, boys.