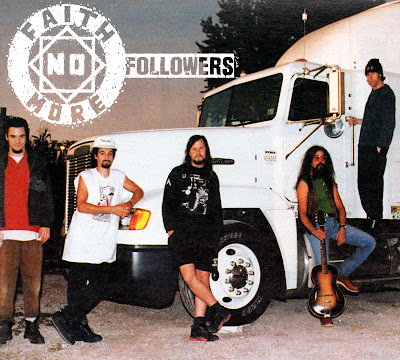 Making A Leap Of Faith

When said that the electorate of Iowa will deter the next President of the United States. Pro-politician, anti-change and super-conservative, will almost certainly choose another four years of George Bush. It's a scary thought, but then right in the heart of America's Midwest, is a scary place.
Faith No More have their first day off on their six tour month in Davenport, Iowa. As with most things concerning FNM, the situation is a little incongruous ; weird even.
Faith No More are loud, aggressive, irreverent and without pigeonhole. Reviews for their latest album 'Angel Dust' were almost universally glowing, and because of that, people who saw them only as a heavy rock (hair, torsos and manic stance) have been confused about what the band actually are. There's a great deal of aggression in their music, and most of that derives from guitarist Jim Martin's guitar lines providing a deadly metallic edge.Yet the other band members have branded him their 'token rocker' and it obviously annoys them when he behaves like some sort of rock cliché.
"It's funny," shrugs Jim, "because they like the same old things that I do—however, they're not willing to admit it. As far as I'm concerned, I like to have my little fun and I like girls' tits, too, If that makes me a walking cliché, what can I do? Should I deny myself?"
Lydon once said that he "saw the Sex Pistols thing completely guilt-ridden," a view that almost all of FNM agree with about themselves.
"A couple of people in the band are especially guilty of being afraid to embrace any sort of rock sensibility," says drummer Mike 'Puffy' Bordin, "and I think that's really a shame. I can understand it 'cos I think that rock has got some really shitty things attached to it, but it's unfortunate 'cos there's so many different things you can do with it, too, So, yeah, there's guilt in this band and I think that was a big thing on this last tour that we did."
Bordin is referring to FNM's support slot on the recent Guns N'Roses tour. Certain members of the band had a hard time justifying their reasons for being part of such a package and went out of their way to slag off GN'R in the press and even on stage before the headliners' show. At London's Marquee club in June, when FNM played a secret gig, singer Mike Patton urged the crowd not to come to Wembley but to phone through with bomb scares instead.
The 'Roses were unaware of (or tactfully chose to ignore) FNM's insults until the tail end of the tour, when they confronted them.
"It was kind of an experiment to see how much we could get away with," shrugs bassist Bill Gould. "Lots of people, including our managers (Warren Enter and John Vassiliou), think that if we shut up and did our Job everything would be really easy, so why do we make it difficult for ourselves? But there's kind of a guilt trip in doing the regular thing. I mean, we're a rock band. We never really wanted to be one, we just kinda of became one. We're not alternative, we're a rock band, we're mainstream, and there's a little bit of shame in that."

On the streets of Davenport the local kids—or those considered weird enough to dye their hair and dress in black—complain that there is nothing to do and no where to go, apart from a couple of bars that play "alternative music" on Wednesdays and Saturdays.
This isn't strictly true, as the band discover. Davenport, which stands on the Mississippi; recently reinstated riverboat gambling. Iowa law, however, limits wagers to a maximum of five dollars and total losses to $200 per person, so FNM head off across the bridge and board the Rock Island Casino (an authentic replica of a paddle wheeled Mississippi riverboat) which is officially moored in the neighbouring state of Illinois and therefore allows unlimited gambling. Three hours tater Gould and Patton have emerged as the clear winners and losers of the FNM troupe, the former having won $300 at craps and the latter down on his luck by $80. But no one has lost out too badly since the casino provided an endless supply of cream cods (a potent mixture of Vodka and cranberry juice) it a dollar a throw. The band move on to the Paradise Island Lounge, where Jim Martin attempts to double his casino winnings by betting $100 on one game of pool.
"A hundred dollars!" exclaims Mike Patton, "Jesus Christ, this is turning into a retard fest." 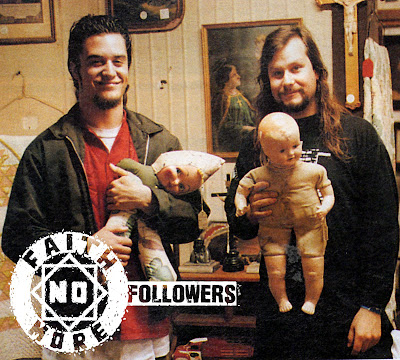 As if on cue, a lippy kid, who had already blagged Bill Gould's baseball cap, demands an autograph plus several places on the following night's guest list. When Patton tells him to hang on until he's finished his conversation, the kid starts imitating him, gesticulating wildly and shouting, "Wow, that's really intense."
Patton turns away exasperated. "What can you do with people like that?" he asks. "You can either put yourself out by humiliating them or humiliate yourself by hitting them. You can't win, so I usually ignore
them."
Faith No More are one of those bands who are always on the road and when touring America they seem to spend most of the time in the Midwest.
"The people out here come to see you once," says Bill, "and then they buy your records for the next ten years."
He's probably right. Although Davenport's Col Ballroom has played host to some legendary names— Louis Armstrong, Johnny Cash and the Tennessee Two, Jimi Hendrix—the locals are restricted to a couple of bands per month these days.

Consequently, dozens of kids turn up for FNM's soundcheck, including four teenage schoolgirls who break into a spontaneous chorus of one of the songs on their latest LP,  Angel Dust. "Be aggressive, be aggressive, be aggressive," they sing, instead of the words that they use to cheer on the football players at their school: "go,fight, go, fight, go,fight, go, win."
Keyboard player Roddy Bottum, who wrote the song ('Be Aggressive') , is impressed and invites the girls to get up and sing those lines during the show. It's a weird concept: four 15-to-17-year-old cheerleaders singing "Be Aggressive" while Mike Patton hollers "You're my master/ and I take it on my knees/ ejaculation / tribulation /I swallow / I swallow / I swallow." over the top.
"What I like about 'Be Aggressive'," says Roddy, "is that even though it's macho in a homosexual way, lots of FNM listeners probably imagine that it is a woman who is getting down on her knees and swallowing rather than a man. I guess it's easier for people to understand and deal with it that way."
Later, when the band (and the four girls in full cheerleader regalia) perform 'Be Aggressive' during the show, a boy in an FNM T-shirt is going wild down the front. He owns the most recent of the band's four studio LPs (1989's The Real Thing and this year's Angel Dust), but has never seen them live before. He doesn't know what 'Be Aggressive' is about and his jaw drops when he learns that it details a homosexual man giving another man a blow job. "No shit!" he exclaims. He whispers this revelation to his friend. "No shit!" comes the reply; it's half a question, half a statement. They both look stunned. But does knowing what the song is actually about make a difference? The first boy wrinkles his nose and twists his cap around his head in embarrassment, before mumbling, "Er, I guess not, but I just can't believe it's about that."
This seems to be a standard reaction from the young men of Davenport—apart from a six-foot-six superjock type who had been happily singing along, but reacts to the news that it's a homosexual song by glancing shiftily at his two shorter (male) friends and glaring. "What exactly are you getting at?"
Fortunately, the cheerleaders have a slightly better grasp on the song. "Well, it's kinda sexual," giggles Katie, 17. "Y'know, I swallow..."
When they learn it's a man singing "I swallow rather than a woman, they are surprised but unshocked. "Really?" asks Heather, also
17. "I didn't know that. But I did know Mike Patton wrote the lyrics to The Real Thing just two weeks," 'Be Aggressive' is an important song in FNM's set. Not Just musically (it's a current favourite of both Jim Martin and drummer Mike Bordin) but because it highlights the wide spectrum of sexuality within the band.
FNM are often portrayed as a macho rock band, with all that entails. Despite their music cutting across metal, rap, Techno-dance, Country and offbeat Tom Waits territory, rock'n'roll stories about them are already enshrined in legend. A recent magazine article portrays them as gun-toting crazies (though Jim was firing a pellet gun); there's photographic evidence of Jim groping the breasts of scantily-clad women and rumours of an ex-tour manager pissing on a girl as she slept in a band hotel room.
"The two extremes of the band are Jim and me," says Roddy. "Jim used to say to me. 'You, raised by women, raised as woman'. He had three brothers and was raised in a macho environment, I had three sisters and am the exact opposite. But heavy, loud music will always be perceived as macho because of its sound and aggression "
FNM's abhorrence of being thought of as Just another rock band not only explains why they swapped their cover of Black Sabbath's 'War Pigs' for The Commodores' 'Easy' or why they are so intolerant of Jim's behaviour but also why Roddy wrote a song as ambiguous as 'Be Aggressive'. "To me there's nothing more disgusting than the whole male/female interaction between bands who are on a pedestal, and the weird groupie thing." he says.
Mike Patton seems similarly disgusted by that part of being in a band. Shortly after joining FNM, he said he would rather have a wank than go to bed with a groupie.
"It's got nothing to do with sex," he explained, "It's like vampirism. I'm their transfusion."
Two years later, he has yet to get used to unwanted attention. "It's still humiliating," he says, but adds "Shame is a definite motivating factor in the way I behave. Because when band politics are working At their best, somebody is always being crushed and humiliated. Humiliation is ever-present."
Band politics are obviously at their worst in Davenport because nobody is humiliated. Patton is spared from drooling fans—largely because he and Bill spend most of the afternoon in an antique shop, with Bill spending his winnings on vintage microphones, while Patton picked up several paintings of mutant babies and an ugly doll with a burnt arm. Back on the cum-dressing room, Patton is hopeful that band politics will improve during the show. They do.
"Three against two and we won," grins Patton, as Jim and Roddy defeated by the rhythm section during the encore. "That's the power of democracy and it's beautiful."
After the show, the cheerleaders clamber onto the bus to enthuse about the gig, chat about their favourite bands (like Skid Row) and tell an envious girl that no, they don't need a lift home, "We're with the band."
Shortly, the girls say their goodbyes and the bus drives east to Ohio. It doesn't matter that Davenport hadn't understood FNM or their songs. "It's not gonna make us sleep any better if people say, 'I understand what you're doing'," says Patton.
"But if they do," adds Bill, "maybe they'll buy us a drink sometime."