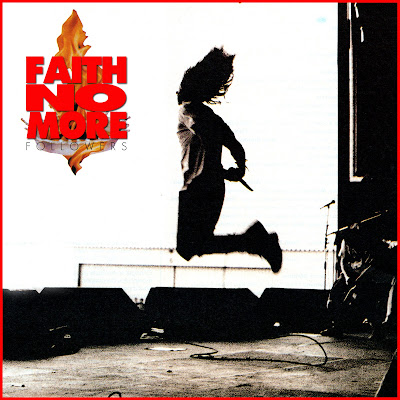 Faith No More: Artists of the Year
by Frank Owen

Whether he's advising Sassy readers to take drugs, kill babies, and steal everything, or wearing a shirt with multiple images of Jesus Christ jacking off for the SPIN cover shoot, or informing the audience at a Copenhagen rock festival that at that precise moment Lenny Kravitz ("the Jesus of hippies") is fucking Sinead O'Conner ("the Virgin Mary") in the hospitality tent, Faith No More vocalist Mike Patton sure knows how to eke out an irreverent good time amid the gruelling drudgery of life on the road.

After 14 months of continued touring--supporting acts like Aerosmith, Poison, Billy Idol, Voivod, Soundgarden, and Metallica--he's understandably a bit twisted and not a little homesick.

A five-hour drive north of San Francisco, among the California redwoods, is the coastal town of Eureka, the David Lynch-ville that Mike Patton calls home. Eureka has recently been in the news as redneck loggers battle concerned environmentalists over the issue of deforestation. "The loggers there are fucking nuts," says Patton. "These people would be protesting, sitting up in the trees, and they'd fucking cut the trees down with the people sitting in them. It's great." As you might expect, Eureka is hardly a fun city. ("In Eureka," adds Patton, "we drink a lot of coffee if we think there's something worth staying up for.") Reading pornography is a major pastime, as is playing at the local water-treatment plant, jumping freight trains, and riding around town waving baseball bats at hippies.

Our conversation is interrupted when Patton allows two fans to shelter from the rain on the tour bus. One of the girls proceeds to ask Patton to sign her butt. He politely declines. 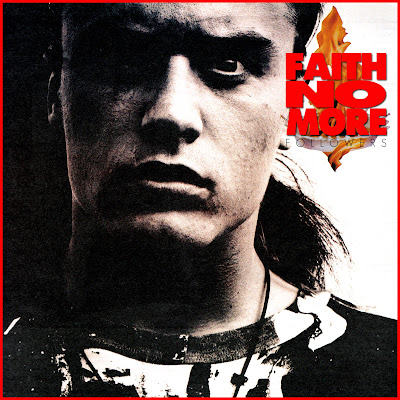 PATTON: A hug? What about a handshake?

FAN: We love you so much. You're so awesome.

FAN: But you are. You're awesome.

PATTON:(getting irritated) Tell me something I don't know. You've already said that.

FAN: I love you. You're awesome. What are you doing after the show? Are you going to party?

PATTON: What do you mean, party?

PATTON: Fucking. That's what you really mean, that's what it all comes down to.

FAN: Have you got any weed?

PATTON: I only smoke crack.

FAN: You're so awesome.

"Goddamn. It's not right," exclaims Patton after the girls leave. "I've never had anyone look up to me and take what I say as gospel. Being so young, I don't know shit; I'm in no position to talk down to someone."

"I'm uncomfortable with being a pop star. When you walk down the street and people yell at you and try to grab your hair, it's not natural. We were doing an in-store appearance and someone grabbed my hat right off my head. That's not right. You don't do that to someone walking down the street, so why do that to me? And I lost it. Threw hot coffee in his face. He gave me my hat back."

It's tempting to link the rise of San Francisco's Faith No More to a phenomenon that has been increasingly evident throughout 1990-- the decentralization of Planet Pop; the decline in the creative hegemony of the Los Angeles/New York/London axis and the subsequent rise of important provincial scenes in places like Manchester, Oakland, Seattle, and San Francisco. But, by their own account, Faith No More have little or nothing in common with the burgeoning Bay area funk-thrash scene of Primus, Limbomaniacs, Psychofunkapus, etc.

"We didn't come up in the funk-thrash thing," says dread locked powerhouse drummer Mike Bordin. "Maybe some people put us at the head of it, but it's something we never championed. We never fitted into any category. We weren't even involved in the bohemian clique because we were such a bunch of dirt heads-guys with rotten dread locked hair who smoked dope and didn't give a fuck. We liked to put our finger on the sore spot a little bit by not playing up to any clique or group."

Keyboardist extraordinaire Roddy Bottum agrees, saying, "For the most part when we started doing our thing in San Francisco, we were pretty much doing our best to fight against the scene."

"I don't think a band like Faith No More could have come out of L.A.," says Billy Gould, Nietzsche scholar and FNM's bass player. "There are different motivations in San Francisco. Most musicians are really poor there, and there's not much prospect of life getting better for them. Greed doesn't motivate their approach to music as much as it does in L.A.

"It's a rainy city with a lot of European influences. But we were like, 'Fuck you, we're from California. We like the beach.' That was thought of as very uncool. I remember we got MTV because that was thought of as uncool as well. We lived in this house which we didn't clean once for a year and a half--clothes all over the floor. But we pooled our money and got cable television and MTV. We did it just to fuck everybody off. We started watching MTV so much that it became this thing that was real. People in San Francisco look down their noses at popular culture, but to us it's a weapon. I remember we played a club in San Francisco once where we did a perfect, note-for-note cover of Van Halen's 'Jump.' People hated it."

In their current live show, Faith No More feature the chorus of Public Enemy's "911 Is a Joke" during "The Real Thing," as well as full-fledged covers of "Easy" by the Commodores and the Nestle chocolate commercial (Sweet dreams you can't resist/ N-E-S-T-L-E-S).

BILLY: Crap commercialism as an art form is a wonderful thing. It's like you hear this song on the radio or in an advertisement and it sticks in your head. You just sort of accept the song because it's part of your life now. Why fight it. You end up liking it. You have to. RODDY: One of the things we've had to come to terms with this year is that the mass audience is not as cynical and bitter as we are. They don't find the same things funny as we do. I got onstage in Sydney and said, "Is it true that homosexuality is illegal in Australia? That's a shame, we won't be able to have any fun backstage now." And the audience was genuinely pissed off, saying shit like,"Fuck off, you faggots."

I think it's really comfortable for us to confuse our audience rather than leaving them with the feeling that they know what's going on. That's why we do the cover of the Commodores' "Easy." We used to do a cover of Black Sabbath's "War Pigs" but we stopped because that's what the audience expected. Every time we played, kids would yell "'War Pigs.' Play 'War Pigs.'" The one night we said, "Are you ready for the cover song?" And the audience went crazy with expectation: "Yeah! Yeah! They're gonna play 'War Pigs.'" Then we launched into "Easy." 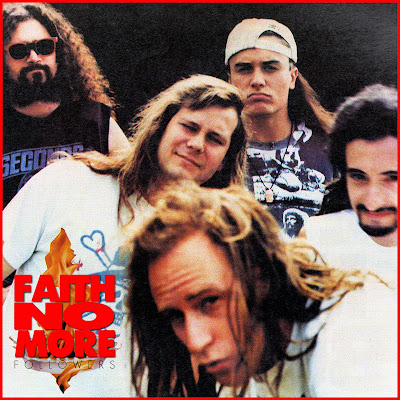 Existing outside of genre, Faith No More have always been an unconventional band, perhaps too unconventional for their own good. In their early days, they operated an open-mike policy that led to the hiring of a freaky cross-dressing African American named Chuck as their permanent singer. "It's still a touchy subject," says Mike Bordin of the sacking of Chuck, who would appear onstage with blue cold cream smeared across his face. According to friends of the band it was a long time coming. Back in 1987, so incensed was nice guy Billy Gould at Chuck's lackadaisical, "Don't give a fuck" performance in front of a sold-out crowd in London, they almost came to blows.

"With Chuck in the band we weren't getting anywhere," says Bordin. "It felt like a shit job, like working at McDonald's. The Club Lingerie show set us back two years," Billy Gould adds.

The sacking of Chuck seems like a calculated move, deliberately designed to increase their crossover potential. It did. But with this band, nothing is calculated.

"We were never anybody's marketing fantasy," says Bordin. If Chuck hadn't left the band it's unlikely that Faith No More would have become the major players that they did in 1990, with a platinum album,The Real Thing, and a Top Ten single, "Epic." Saving rock'n'roll from itself. It's a dirty job but someone has to do it.

Last words go to Mike Patton: "Especially these days, people expect some kind of profound rock statement. Yet at the same time they don't want you to be boring. I guess people are gonna be real disappointed when they get to know us better."

Band of the year, no contest. 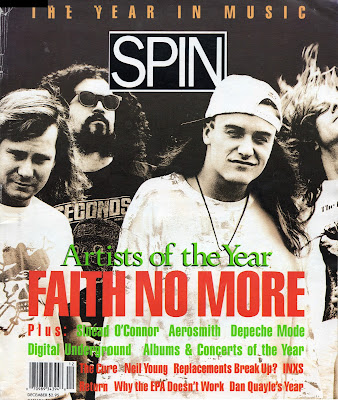