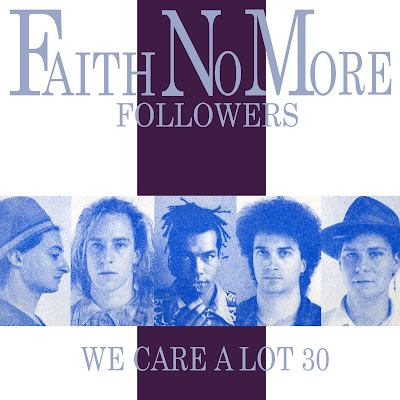 In November 1985 Faith No More released their debut album We Care A Lot on Mordam Records.
The Album

FROM THE off. Faith No More were a volatile outfit. Puffy and Jim Martin hated one another, Martin viewed Mosley with suspicion, Mosley saw Gould as a smart-ass, Gould considered his lifelong friend Bottum complicated and Bottum thought that Martin came from another planet. But these tensions made for compelling, visceral live performances and freewheeling, unpredictable music. Gould recalls a genuine feeling of excitement when Mosely first sang Roddy Bottum's lyrics to We Care A Lot over their funky, syncopated music. It felt like a proper song for the first time. The quintet returned to Matt Wallace's garage studio to commit the new song to tape.
The We Care A Lot demo featured four songs, but the title-track stood out head and shoulders above the rest, and it's no surprise that this was the song that landed the group their first record deaf. Two decades on, there's some divergence as to how it actually happened. As Gould remembers it his roommate, Will Carpmill, was playing the We Care A Lot demo in the San Francisco branch of Rough Trade Records when Ruth Schwarz overheard it. Schwarz tells the story a little differently, saying she heard the tape via a co-worker at Rough Trade Distribution. where she was employed as a record buyer. Either way, Schwarz called Gould straight away and offered to advance the band money to turn the four-song demo into a full album for her new label Mordam's debut release. "This was the hey-day of Run DMC and 'We Care A Lot' was just an incredibly fresh mesh of what was happening at the time," says Schwarz, still head honcho at the successful San Francisco indie label, today. "I didn't think they'd be anything huge, but I liked their raw sound and I felt the funk-punk crossover they were exploring was exciting and new."

We Care A Lot, was recorded, over-dubbed and mixed by Matt Wallace over three successive weekends in 1985. There were problems during recording with Mosley losing his voice, but everyone was happy with the results. "The Mordam record is probably my favourite," says Matt Wallace. "We had such an incredibly small budget and we were forced to make decisions quickly, going on instinct."

Taken from the Introduce Yourself press release.

I care a lot. And I ain't gonna play Sun City—not the resort community in South Africa or the retirement community in Arizona either. Not me. I care a lot. I am, after all, the world.
Same goes for Faith No More, but double. They care a lot. They care a lot. It's a dirty job but someone's gotta do it. If they don't care, who will? You? Lionel Richie? Not very goddamn likely, is it?
Sadly, I missed the epoch-making post Grammy sessions for this history-assembling record, which puts me in sort of a tough position for writing the official authorized book version and then complaining bitterly when the era establishing / single / album / video / event is clutched to the humble hearts of millions but spurned by the hardened heart of critics and so on. But I'll sure do my best. Besides, Kim Carnes and everybody else ever managed by the sainted Ken Kragen were all on hand to lend moral authority, so maybe I'll just ask them how it went down. We care a lot. Which is more than we can say about you, you apathetic cynic you.

Hey here come Kim 'n' Ken right now! Kim, would you care to fill us in on the experience of the making of the  We Care A Lot album/event/T-shirt? "Well, what really struck me about Faith No More, aside from the obvious depth of their concern, is that they sound like a fresh and unstudied aggregate of the crunch-rock verities—like the Stooges and Sabbath and even the MC5 but already schooled in the pragmatics of arena rock. And, of course, they care a lot. That goes without saying."
Gee. thanks, Kim. Say if your career should ever cool down from its current  poker-hot peak, you might want to give us a jingle over at SPIN and sign up to do a few album reviews. You seem to have quite a knack for this sort of thing. What about you, Ken? Any advice to Faith No More on the distribution of funds from this millennium-establishing LP?
"To be quite frank about it, Bart, I feel that the distribution of funds is a far less
essential matter than the empowering .affirmation that one who cares a lot receives from the organisation of a truly significant event like live Aid or the We Care A Lot sessions. My strongest concern is ultimately with my own personal responsibility to generate the special life affirming communion of empowered spirits that takes place when rock stars movie stars and TV stars join together with the press to announce my latest fund raising event, Hands Up, America. I care a lot, naturally,  so I can't tell how pleased I am to see young bands like
like Faith No More have learned so much from our own concern and hand developed their own logo and stage backdrop and silk screened T-shirts far in advance of the event created demand. My only advice to the boys is just to keep carving out those extra crunchy riffs. Speaking for both Kim and myself, l think I can easily say we care a lot.

It's just the nature of subterranean style in the '80s. When you're in an aggressive rock quintet that plays a boiling brew of punk, funk and heavy metal, plenty of your fans — male and female — are gonna ride skateboards, wear tartan skirts, pierce various parts of their bodies and sport tattoos. (A tattoo concession? Hmmm...)
And if you think the audience was wild-looking, consider that the band was at one with It's constituents. also affecting the long, unkempt dreadlocks that pass for hairdos in punk circles.
Anyway, a raft of colourful types was stomping on the Oasis pool cover for Faith No More, currently enjoying a lot of airplay on the local college radio scene. Even major commercial rock stations in the Boston (WBCN) and Washington, D.C., (WHFS) markets are playing the title song from the San Francisco band's first album, "We Care a Lot."
But a far more Intriguing crossover is occurring, courtesy of Bay Area club DJ's.
With its lumbering, deliberate beat, staccato guitar riff and a sarcastic vocal delivery reminiscent of Run-DMC's hard-rock rap music, "We Care a Lot" actually is becoming a dance floor hit. Consequently, there were more than a few tastefully dressed SoMa clubgoers mixed among the punks. The band's unvarnished show probably was a revelation for the upscale members of the crowd. It's a long way from Run DMC's ghetto to the hardcore haunts of Faith No More. For that matter, "We Care a Lot" — despite humorous lyrics seething with contempt ("We care a lot about the S.F., N.Y. and LAPD/ We care a lot about the Cabbage
Patch, the Smurfs and DMC/We care a lot about Madonna and we cop for Mr. T/It's a dirty job, but somebody's got to do it") — is atypical of the band.
Essentially, Faith No More — Chuck Mosley on vocals, Jim Martin on guitar, Bill Gould on bass, Roddy Bottum on keyboards and Michael Bordin on drums — veils loud, abrasive guitar-based rock with clouds of Gothic keyboard chords. The tireless Bordin — whose hands were bloody from the force of his drumming by set's end — pulls down a metronomic funk backbeat.
driving the band forward as he anchors them the steady rhythm. On a song like "When the Worm Turns," a study In high-energy nihilism. Bordin's steady attack appears to keep Martin and Gould from literally throwing themselves off the stage as they play. "We Care a Lot" wasn't the only anomaly in the band's set at one point ID the show, Martin wound down the proceedings with a solo piece that rang of John Fahey's pastoral guitar excursions. It was indicative of what fine players they are.
There's also an unexpected tunefulness to much of the band's material, which surfaces when Mosley stops shouting. But don't tell their fans. They're more Interested in seeing Gould smash his bass on the side of the stage and then return to play "Arabian Disco," the furious metal-funk encore, with a chunk of the guitar dangling from the pick-up.

A pick to click. Already the title track Is filling the dance floor with Its poet punk beat "We Care A
Lot" features the serious side of a Beastie Boys type of beatbox rhythm with chanted message. Faith. No More emit a specific blend of cynicism and optimism that raise them above the dross. Bouyed by a wash of keyboards and driven by the rhythm section's punch. Chuck Mosley's vocal varies from croon to shout and back. Pausing just short of the pulpit, he says a lot.

To put it bluntly and positively. I hate rap music or most usually, anything that resembles rap music. Just can't stand the shit. But, like everything else, there an some exceptions to the bad. Faith No More is such an exception. Their style somewhat resembles the "boom swoosh, boom swoosh, blabba blabba blabba" of the rap (or whatever they want be called) bands of today, but still the style in which they execute their material makes it all very much their own. I love this album.
The title tune pumps in with charismatic guitar volleys and a tirade of lyrics verbalised in a fashion that sets  apart from anything I've cared to hear. The following song, "The Jungle," is another special arrangement, unique and attractive with the uplifting tempo phasing vocalisations. There are ten other songs on here including an acoustical arrangement titled Jim, all equally exciting.
Faith No More have been receiving massive airplay on the night club circuit and radio stations. Listen to them before you hear them too much and get sick of them.

ALL JOKING ASIDE. CALIFORNIA JUST happens to be the fount of all modern musical innovations since 1970 See. I've got this theory—California is the great mutation frontier of America where men and women are free to mix and match whatever types of music they damn well feet like.  Well, anyways it will all be out later this year in my new book.
From the tame twisted state that spawned the DKs the Red Hot Chili Peppers and the Suburban Lawns, emerges another Californian mutation. Faith No More. No more Faith in religion? Life? Cabbage Patch Kids? All and none of the above. Fired by a hardcore passion and driven by an overpowering funky back beat the album steam rolls along through some fierce, sarcastic and intense tunes.
To make a worthwhile album, however commitment and an electric guitar often aren't enough;
fortunately, Faith No More possess the prerequisite talent and intelligence to accomplish the task. Good stuff abounds on We Care A Lot: and the unignorable title track sears with frustration and anger delivered in the form of some delightfully sarcastic lyrics

We care a tot about the Cabbage Patch. The Smurfs and DMC about Madonna and we cop for
Mr T. About the little things, the bigger things we top about you people, yeah, you bet we care a lot. Yeah.
They're out to save the world cause, like they say. it's a dirty job. but someone's gotta do it.