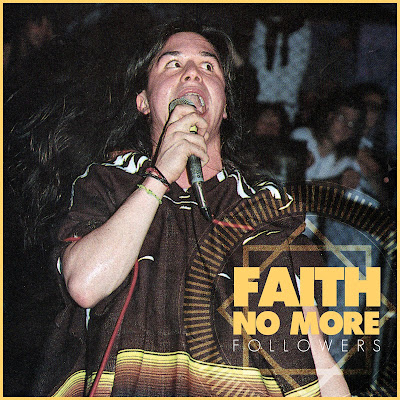 So many things have changed down Mexico way since your dad passed through there before he was shipped off to 'Nam. The cardboard shacks that once filled the riverbed have been pushed out to the hills that lie between the city and the ocean (an ominous concrete channel now insures an unimpeded flow of raw sewage to the beaches in the North). Pseudo-chic shopping malls that cater to wealthy Mexicans and visitors from abroad now compete with the plethora of smaller shops that are the livelihood of less-well-to-do merchants. Concerned that this glossing over might detract from the band's optimal Tijuana experience, I piled into a Volkswagon bus with my faithful Sherpa guide/translator Juan-Ruben, faithful (No More) publicist Kim, and photographer/stunt driver Thorn, for a run on the border. Destination: Iguanas.

Iguanas is an odd conglomeration of concrete and steel nestled in the heart of one of the aforementioned shopping malls, and probably one of the best places to see a show anywhere. Upon our arrival there wasn't a sou! to be found and, considering that it was 30 minutes after the scheduled load-in time, Kim promptly located a pay phone in an attempt to call the band at the hotel back across the border. Lesson One: Don't try and call out of Mexico from a pay phone without an AT+T calling card. No acceptamos quarters. Juan-Ruben astutely pointed out that the only button that will do anything is the one marked "0" and, 40 some-odd rings later, the operator reluctantly placed the call. We were informed that band was in transit, clearing the way for the first cocktail opportunity. One hour and several margaritas later, the FNM entourage rolled up with the promoter, It seems that a lengthy delay in getting the vehicles over the border had prompted Roddy Bottum, Bill Gould and Jim Martin to walk across for their own excursion. However, Mike Patton and Mike "Puffy" Bordin were more than ready to jump in the bus for a tour of some of the seedier sights. Destination: Avenida Revolucion.

Avenida Revolucion is what Hollywood Boulevard can only aspire to be and, in spite of many recent attempts to curb the sleaze, it is still the best place to savour the quintessence of all that is Tijuana. The seemingly endless string of bars and trinket shops offers more than an ample opportunity to indulge in some real culture. With real culture in mind, we quickly detoured into the Unicornia Club, a strip bar/brothel located down an obscure staircase around the corner from the jai alai fonton. The Tropicana it isn't, but inside the dimly lit environs we managed to slam a few beverages as overweight strippers/prostitutes writhed around while the cockroaches and pack rats mingled on the beams overhead. Now I'm not sure that it was because Juan-Ruben convinced the manager that Mike Patton was actually Axl Rose or that some hideous wench was disrobing to "Stairway to Heaven" (there's a real bump-and-grind tune), but either way, we made a hasty exit. With cries of "Axeeel, come back!" ringing in our ears, we surfaced into the 24 afternoon sun and headed on down the sidewalk.

Back on the street we proceeded to blend in with all the savy of the proverbial sore thumb. As Mike and Puffy wandered through the various shops, the vendors glared and mumbled Spanish phrases—01 which the only decipherable word was "Metalleeka." These same vendors, however, were more than willing to pitch us or their wide assortment of blankets, panchos, switchblades, ninja supplies, statuettes, leather goods, puppets, and anything else with which they could acquire greenbacks. In one particular establishment Puffy had his eye on a lime-green blanket that the vendor assured him would be great for hootchie-cootchie.
Mike, on the other hand, took interest some faux-Aztec icons. In both cases the gypsy tendencies of Juan-Ruben were employed to grind the price down to something that might actually be called a bargain. After an exchange of good-natured insults between Juan-Ruben and the shopkeeper, we were off again.

About this time we were beginning to get a little hungry, and when it comes to eating in Tijuana, a moment of caution can prevent an hour of dysentery. Wanting something more adventurous than the local Denny's (now there's a scary thought), we settled on this fairly sanitary looking place just off the main drag. After perusing the menu for the least lethal of the fare, we placed our orders and hoped for the best. Soon the food and drinks were on the table, and Puffy began to relish his role as the culinary coroner.
"Remember those two dogs we saw earlier?" he said as he inquisitively prodded his food with a knife. "This was the one that was taking it."
I assured him that we were probably eating the loser from the fifth race at Agua Caliente, but that only caused him to scrutinise the contents of my plate. "It's a red burrito," he said between belches, "smothered in a red sauce with some kind of artery sticking out and some other stuff. It could be brain. It could be cabeza."
As descriptive talk of Mexican cuisine can eventually lead, we got onto the subject of chili peppers—Red Hot Chill Peppers, that is. Being that it was this particular week that the singer of the Chili Peppers had made some disparaging remarks leveled at Mike Patton to Kerrang, I asked Mike if he had any comments on
the subject. "I'd really like to set all that straight," he said after a thoughtful pause. "What he doesn't realize is that I am Anthony Kiedis, and I'm the raddest dude. Let me tell you, I'm in the greatest band, and it's so cool. But all these jerks, one of which is that Mike Patton asshole, all want to be me. So I'm gonna get him, and I'm gonna get him good." "You and Axl Rose?" inquired Juan Ruben. "Me, Axl Rose, and Professor Griff," he deftly responded. Puffy, on the other hand, was far too busy to engage in such inter-band rivalries. He's got his own things happening. "You see, we're in the midst of Puffy mania right now," he said. "It's gonna be huge. We'll have Puffy stickers, Puffy but'- tons, Puffy T-shirts, Puffy sheets—you name it," "It's gonna be a whole new thing, with everyone changing their hairstyle," added - Mike. "They'll all have that [screwed-up]  Eddie Murphy 'fro on top, with dreads hanging down the back." Step aside, Bart Simpson.

With the sun sinking in the west, we began to make our way back down the avenue. Down past the Bambi Club, where sailors and Marines maul the breasts of transsexual strippers (oblivious to the biological tinkering that has gone on), Mike and Juan-Ruben started some serious haggling with a vendor over a poncho. The deal was sealed as JuanRuben took a swig of the guy's tequila, and onward we went. Mike was content with his purchase, but was still pissed about passing up a curved-blade stiletto that he had spotted earlier in the day. Much to his chagrin, there wasn't another one like it to be found and, with the impending performance, it was time to get over to Iguanas.

Meanwhile back at the gig, the parking lot was full, and it was the same scene inside the club. The floor was packed wall to wall, as were the multilevel tiers that tower over the stage. Shortly after 10:00 p.m, as Circus Of Power hit the stage, the venue erupted into one giant, rabid
throng of churning bodies. Although it seemed that the sound tech was in danger of pushing the PA system beyond the point of no return, COP managed to unleash a solid set of its trademark grunge and groove.

By the time Faith No More began grinding out the opening chords of "From Out of Nowhere," the near-capacity crowd was more than ready to re-engage itself in the tumultuous frenzy with which it had greeted Circus Of Power. Moreover, it appeared that they had Jacked up the intensity by several points. A poncho-clad Mike Patton bounced onto the stage, blurting out some Spanish slang he had picked up from Juan-Ruben, and FNM proceeded to .blow the roof off all the way to Oaxaca. They followed up the powerhouse intro with a streak of thundering hits from The Real Thing, including "Epic," "Surprise! You're Dead!" and "Woodpecker From
Mars." Selected tracks from the first two FNM releases were also touched upon, but the real knee-slapper had to be a righteous rendition of the Nestles chocolate theme song ("The very best, N-E-S-T-L-E-S"}. As the blaring sound system gave way to ringing ears, it was apparent
that the band had turned the place upside-down.

With the Mexican police hovering like vultures in the parking lot in search of overindulgent fans to prey upon, we navigated the hazards and headed toward the border, Along the way we managed to pick up Jim Martin, a disgruntled FNM road manager and their crew—all of whom had been stranded by an ever-efficient promoter—and sometime before 3:00 a.m. the van was back on terra cognito. Hasta luego, locos! 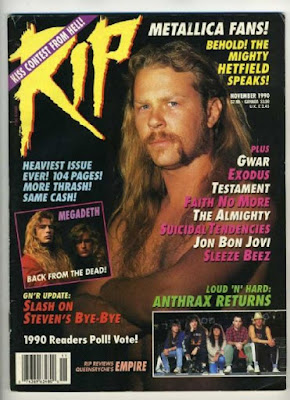