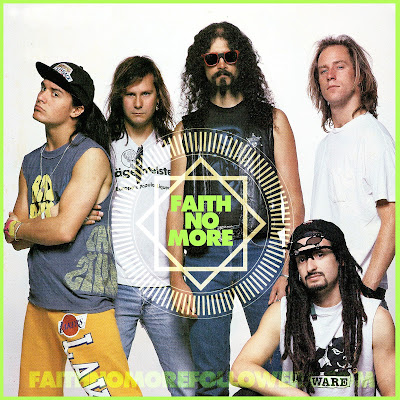 Picking up from our previous post which detailed how Mike Patton came to join Faith No More.


Here are a collection of quotes from band members continuing the story of how The Real Thing began in earnest. And how in October 1988 demos were recorded to promote Mike Patton to Slash Records.

After his audition Patton did of course fill the position left vacant by Chuck Mosley, and the newly completed five piece set about creating their next album.
The music was mostly written already and a selection of songs even had a first draft of lyrics and vocals by Chuck.

"Billy, Mike Bordin and I wrote at a rehearsal space in Hunter's Point. It was among the first batch of songs that we wrote after Chuck left the band. Typically, the three of us would get the skeleton of a song going on, and then get Jim Martin to put his guitar part on. Sometimes Billy would write [Martin's] guitar part for him."

"I had written stuff for about 3 or 4 songs, but had stopped working on them when I knew I was gonna be fired. I would have to hear the songs to remember, cause I can't name them by title, one of them became a single, I think, but not positive...maybe Falling To Pieces might have been one of them."

"At first, yeah, I was nervous because the other guy had a distinct style and everybody liked him, but they made it very comfortable for me, encouraged me to be myself and do my own thing. The fans were another thing, but I was getting great reactions, so that really helped. The music is still similar to what it was before, but my voice is real different. He was really off-the-cuff, more spontaneous, had his own thing going."


After a short time rehearsing Patton set about writing lyrics and had most of the album completed within a week. It took him around a fortnight to write drafts for the whole album.

"We rehearsed for two months straight. They had all the material on tape, I wrote the lyrics, then in the studio we just had to get the songs tight"

"Mike (Patton) came in when we had some songs demoed and within a week he had seven of 'em finished with all the harmony parts worked out."

"I was really impressed with Patton. The band had already written all the music, and he was given just two weeks to come up with all the lyrics and melodies. He really rose to the occasion. He's the most phenomenal singer I've ever worked with, and when he's backed against the wall he s absolutely brilliant."

"Patton was asked to write the lyrics  for that record. And he did that within 12 days - he wrote all the lyrics and melodies. And basically, he said: 'Hey guys, can I make this part longer or this part shorter?' And they said: 'No.' So the the music was done, and they were taking no input from Patton about arrangements. He was singing really nasally and also his pitch on record was not as good as I knew it could be," says Wallace. "I was just like: 'Why don't you Just hit the notes?' And he goes: 'No man, this is my style.' Because he'd sing the song on tape, and he'd do this amazing, really full voice. I'm like: 'That's the voice! Get that on the dam tape!'. He was like: 'No man, I don't want to do it'. "I never asked Patton this directly, but one of two things happened - one, he was trying to keep that kind of snotty, punky, rap persona, and that was important for him to have that snotty attitude on the recording. Or another possibility was that he still had a lot of loyalties with Mr Bungle, and I think he wanted to separate himself as the singer from Mr Bungle and Faith No More."

"Right from the get-go, Mike's takes on some of the songs were not arty. They were very catchy pop music takes. At the same time, we knew his background and his takes on the other songs were in the complete opposite direction—very arty and weird. And that back and forth kind of embodied what we were doing at the time. It was a weird breed of hard rock with loud guitars and keyboards, and he had the scope to do it. I remember when he first sang us his take on Falling to Pieces, and it was like, "Whoah! He's gonna sing it like that? It was a straight-ahead pop song with harmonies, really slick-sounding. But then a song like 'Surprise! You're Dead! was like extreme, arty, noisy stuff. It was a really neat balance."


Sometime in October 1988, FNM recorded at least four of the new songs they had completed with Patton on four track Tascam tape. This demo would be used to showcase their new lineup to the record company.

"When we were looking for a singer, we were just looking for anybody at all. We figured if they could hear what we were playing, if they were musical enough to sink into what we were doing then it'd be OK. The majority of singers didn't have a clue. They didn't hear what we were hearing. Patton already had ideas in his head when he came and tried out with us, and l could tell that what he was doing was on the right track. I had always hoped Chuck would sing a little more soulfully, because I felt that our songs had that potential and it wasn't being used. That was the angle that Patton took, and that's exactly  what convinced me. It blew my mind how quickly became up the lyrics for the songs. I have tapes of the early four-track stuff and it was really cool, really exciting to hear."

"I know we did demos with Mike, just to show the label we did have a singer in place. And we also did a crazy photo shoot with him, just so they'd have a picture as well. It was in this little punk-style studio, and we looked insane. I'd got snot hangin' out of my nose... It was really punk! Roddy and Billy were from Los Angeles so they stayed at home while we did the album. But neither Jim nor I were natives so we ended up staying in the Oakwood Apartments in California, which was a huge block where loads of bands used to stay while recording. I recall that Metallica were finishing up ... "And Justice For All" at the time, and they hung out a lot with Jim. Now, this was in an era before mobile phones and we didn't have a phone in our apartment, probably trying to save money, so Jim and I couldn't keep in contact with anyone, Our day used to start at about 5pm when we'd go down to the studio, Jim was a night owl. He'd stay up until about 5am. and then sleep through the afternoon.The two of us worked on our own in the studio. Jim had come up with a lot of music for the album, including Surprise! You're Dead.' (which actually goes back to a 1970s band called Agents Of Misfortune. featuring Jim and future Metallica bassist Cliff Burton), Zombie Eaters Falling To Pieces. We'd be finished by about 10pm.. and then go out to party. One day Jim and I went in early ~ and there were Billy and Roddy, working on stuff! It was the first time we'd seen them. so we all sat down and went through loads of ideas. That was a really positive time for the band. We were getting along really well, and just played each other various things. For instance. Roddy had something he'd been working on: Jim took this, and turned it into Woodpecker From Mars"