The First FAITH. NO MORE Show 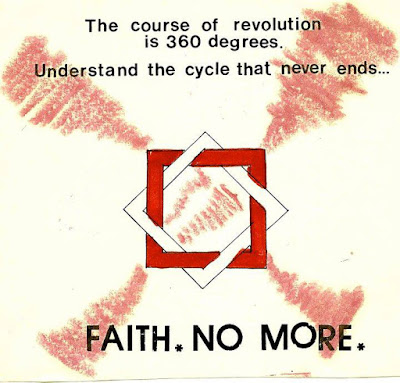 The very early history of the musical partnership of members of the FNM that recorded 'We Care A Lot' in 1985 is well documented. For the purposes of this article however our story is from 1983.

The line up of FNM at this point included Mike 'The Man' Morris (vocals and guitar), Wade Worthington (keyboard), Bill Gould, and Mike Bordin.

However during rehearsals it became apparent that the rest of the members of the band didn't see eye-to-eye with Morris. Worthington saw the writing on the wall and left, only to be replaced by Bill's childhood friend Roddy Bottum. But tensions were growing between Morris and
the rest of the band.

"We all just kind of quit. We said: 'We're going to start playing without Morris.' We like each other, we've got a vibe. We've got an itch that we want to scratch'. So that's why there was keyboard, bass and drums, and that's why we switched guitarists so much, because it was just us three. The 'Man' was gone - the man was 'No More'." 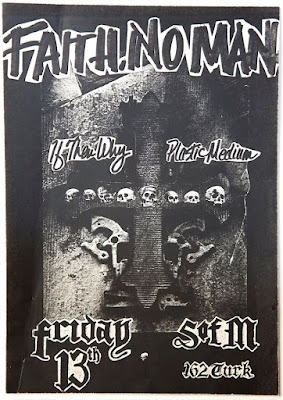 The guitarist and vocalist positions would alter from night to night after the band parted ways with Morris.
Roddy spoke about his first ever performance with FNM in a recent interview. The show was at Sound Of Music in San Francisco, most likely on May 13th 1983. (Thanks to Faith No More Gig Database and Faith No Man for the help.)

"The first show I ever played was with [first singer Mike Morris]. There was another keyboard player at the time, Wade Worthington, and he said he didn't want to be in the band any more. I was like, "I play keyboards," so we planned this passing-of-the-wand, so to speak. I did my first show at the Sound of Music in the Tenderloin in San Francisco. It was this really seedy, fucked-up, sex workers and drugs neighbourhood. Wade played for half the set, and I played the second half. But for some reason I did speed that night—I'd never done it before—and it was just this overwhelming crazy mix of a lot of things coming together."

"Roddy fitted in perfectly, and it was only a short matter of time before we realized we couldn't stand the singer. Me, Puffy and Roddy were getting along really well, we were around he same age and had a lot in common, So one day we all 'quit' the band, which is kinda a polite way of kicking out the singer. We had called him 'The Man' because he was older, bossier, he wanted me to dress as some New Romantic or some shit like that. So finally we just told him to fuck off, yet he'd managed to brainwash us into believing that we couldn't write songs. So we were afraid that we might've needed him. That made firing him a big stab in the dark. But then we started coming up with all this cool stuff, where we pretty much threw caution to the wind and said 'if we can't come up with good stuff what the heck we'll have a good time trying?' That's how we came up with our basic first sound, and it was a liberating kind of thing. We didn't give a fuck if we never got a record deal, we didn't give a fuck about anything. We were just playing music we couldn't play with anyone else."

"It was really Mike Morris' band, and he was a terrorist. I am aware that I'm the one who pretty much saw that they left him, if I hadn't joined they'd probably have stuck with him a lot longer. The combination of the three of us was a lot stronger than just them. We were hanging out around each other a lot, talking amongst ourselves, preparing to oust that guy."

"One thing led to another and we both realized that 'The Man' was a slave-driver, a bit of a dick. The keyboard player quit, Roddy came in and he isn't the type to be browbeaten by anyone. We liked playing with each other, there was something going on and it didn't have to be anything. For the first lime it wasn't bad rock, it wasn't bad progressive, it was bad whatever! It was bad 'everything'." 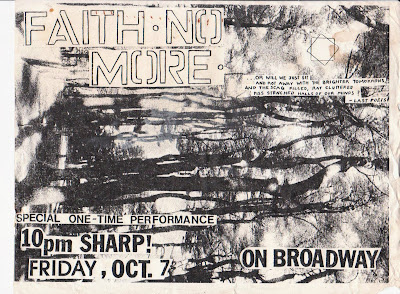 On October 7th the newly named Faith. No More played a gig in San Francisco at On Broadway or so this flyer for the show indicates. Was this the first Faith No More show?

A live recording of the night exists but it is labelled October 11th which leaves us guessing the precise date of the very first gig. Either the tape is labelled incorrectly or FNM were billed for the 7th and didn't play.......Matt Wallace was sound engineer for the show.

The lineup for this show included Jake Smith on guitar and Joe Pop-O-Pie on vocals. Joe of course was the singer from 80s misfit punk outfit Pop-O-Pies and there is a fascinating story which outlines the origin of the lyrics to the Faith No More song 'Spirit'.

"So I think it was just before we were going to start the first rehearsal for the first FNM show. This was September of 1983. The show was in October of 1983. Roddy and I arrived at the practice space first. It was also used by a band called Crucifix. Jake Smith was the guitarist on that first FNM show. Anyway, we're waiting for everybody else to show up and Roddy got behind the drum kit and started banging away. Jake had his Marshal Half Stack and this awesome new fangled guitar that had to be tuned with Allen wrenches. Well, I fired it up and started playing. The sound I was getting out of this thing was awesome! Very inspiring.Just off the top of my head I started playing this set of power chords that would later become the bass line of my version of "The Words of Jamal" (for the first FNM show we would end up using a different instrumental underneath the words).Ok so I'm strumming away and Roddy's still playing drums and I remembered those words that I had jotted down from that night i NYC. And I started to rhythmically shout them over the chords I was playing. It sounded really good so it stuck. Now in March of 1984, when I was recording the next Pop-O-Pies album we did a version of it. The album is called "Joe's second record" with Bill Gould on bass, Mike Bordin on drums and (the infamous) Mark Bowen and myself are playing the guitars on it. And of course, I was doing the vocals also."

Why Do You Bother?