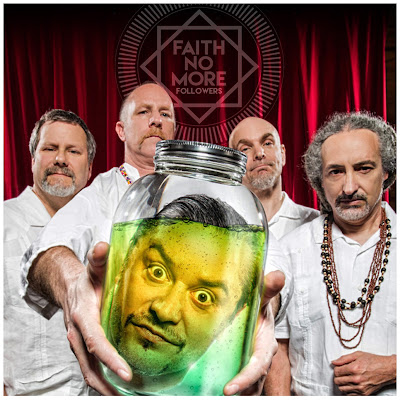 An update of Faith No More interviews and news.

After so many years without recording an album of new material, did you still hope to launch a new material with the FNM?

I never thought much about it until we started doing the tours and we did a lot of touring. So it was getting boring, because we only played the old stuff so happened quite naturally. We were together and made sense to make new music.

There are some bands that have an almost unanimous in Brazil. Even those who do not like the type of sound, respect. The FNM keeps this appeal due to its musical integrity in so many years down the road. Was that the reason for the band to have so many fans in Brazil?

I don't know why they like us, can't understand it. It is a very strange song for me, I am always surprised when people like us. At the beginning we were only popular in smaller groups, which made sense, I think people like our chemistry, like our shows. The first time we came here we played at Rock in Rio and was the largest stadium in the world (Maracana) and a lot of people saw it on TV. Out of nowhere everyone knew who we were, I think people are attracted by our energy in shows.

I think it's a different world for Americans, there is a Brazilian culture in the United States, especially in New York, where I live and have different cultures, it has a large community of Brazil, but I can not say.

More than 30 years involved with music. You think to stop one day? And after stopping, you find yourself sitting in a chair enjoying retirement or can imagine playing with more than 70 years as Charlie Watts (drums Rolling Stones)?

I have another band that I play sometimes, but I never thought of again playing in Faith No More. It was a surprise for me, it didn't even seem real when talking about it, like a dream, and now here we are after five years and is pretty cool.

Did you know that several independent Brazilian bands did a tribute to the FNM? Have you heard?

I did not hear the tribute, hey! How many songs?

Did they sing in English or Portuguese?

Bands are Brazilian. The only band that sings in Portuguese are the Ambervisions, Santa Catarina quartet.

New York Rangers hockey player Dan Boyle talked about being a roadie for Faith No More this summer.

What did Dan Boyle do on summer vacation? Work as a rock 'n' roll roadie, of course


“As silly as it sounds, it was an amazing experience,” says Boyle of his gig, which took him to DC, Philly, Boston and NYC. “[Being a roadie is] a thankless job, but an important job. It’s not that different from what [the Rangers’] trainers do for us!”


“They were my favorite band growing up,” Boyle recalls. “I told [the team’s] p.r. guy, ‘I don‘t care if I have to stand in the top corner of the venue, get me in there.’’’ He ended up becoming close pals with singer Mike Patton and the other Faith No More guys, who are living one of his dreams.
“If I wasn’t a hockey player, I’d be the lead singer of a band,” Boyle explains.
Even while he was on the road, the Old Greenwich, Conn., resident couldn’t skip his hockey workouts. Between concerts, he ran stadium stairs and did pushups on the tour bus.


“We had a couple of beers, but it wasn’t sex, drugs and rock ’n’ roll,” the married father of two daughters admits. “Had I toured with them 25 years ago, this might be a different interview.” 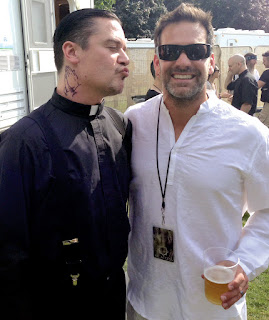 Roddy Bottum looks back on his favourite show memories.

THE 5 BEST FAITH NO MORE CONCERTS

The first show I ever played was with [first singer Mike Morris]. There was another keyboard player at the time, Wade Worthington, and he said he didn't want to be in the band anymore. I was like, "I play keyboards," so we planned this passing-of-the-wand, so to speak. I did my first show at the Sound of Music in the Tenderloin in San Francisco. It was this really seedy, fucked-up, sex workers and drugs neighborhood. Wade played for half the set, and I played the second half. But for some reason I did speed that night—I'd never done it before—and it was just this overwhelming crazy mix of a lot of things coming together.

We did a bunch of shows in San Francisco for a very long time, but then we had a record out (1985's "We Care a Lot," their first official release, though a re-recorded version of the song appeared on 1987's "Introduce Yourself"). "We Care a Lot" was getting attention in weird ways. Steve Blush had us on a bill in New York with all kinds of dance bands at this discotheque called The World. It was a big deal at the time. But it was more dance-at-3 AM stuff and we were this scruffy, dirty, dreadlocked arty San Francisco band doing this crazy hybrid dance-rock-hip-hop. I honestly think two of the guys from Run-DMC were at that show. That was when I thought, "Wow, what have we done?" It was like a physical point when we felt what was happening to us, that people liked us. But we were cocky at the time. We expected a lot.

The Real Thing took so long to break. At the time we were going back and forth between Europe and America—we were getting bigger in England, but it wasn't happening in America. England was actually the first country to really pick up on us. At one point we played a show in London, and I think someone forced three of the people from our American record company to come over to see the show, see the success we were getting, maybe instigate them into putting a little more into the band. And it was a crazy show—like the barriers broke down in the first song. We had to stop the show. It was mayhem, but it sort of turned the tables for the American record company people. I think that was the beginning of the mainstream acceptance of the band.

At this point, we were positioned to do whatever we wanted, and we could call the shots. For whatever reason we were always friends with Metallica, and they were going on this landmark tour with Guns N' Roses. It was a really big deal, the two biggest bands in the world at the time, and they asked us to support them. It felt like this crazy golden opportunity that we didn't dare say no to, but at the same time we were a little ambivalent, because it was a weird position to be in. It wasn't really our crowd and it didn't really work—people weren't very open to what we were doing. I mean, some were familiar with us, and honestly there were probably a lot of fans out there, but we were such brats, always so reactionary. The reception we got after The Real Thing made us go the other direction in the live sense too, and that made it difficult for people to like us. I think our success would have continued if we'd done our own independent tour, without all the trappings of big rock.

This tour has been great—we like each other, we like the songs, we're getting to do what we do. And [MSG] is a unique opportunity to craft something really personal. MSG is so heavy of a place—we've never played there before, so it's crazy ambitious. And it's actually kind of a sterile environment—I love the place but it's sort of one big block of concrete, and it can be hard to transform that into something a little more organic. But we're doing everything we can onstage to help with that, to have a presentation that really goes against the grain and what people expect us to do. We've got a lot of flowers.
Labels: 2015 Bill Gould Dan Boyle Faith no more Mike Bordin Roddy Bottum