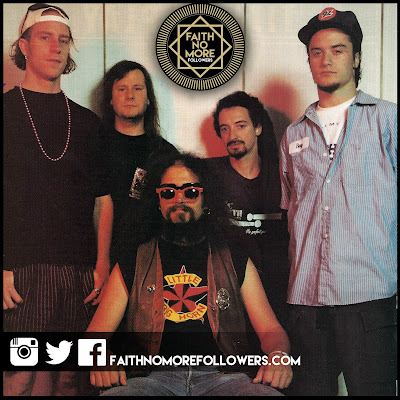 On this day 23 years ago Faith No More were touring Europe on Angel Dust. The first night stop was in Jäähalli (Icehall) Helsinki, Finland.

THE NORDIC winter has frozen The Gulf Of Finland. There's a blizzard raging, two feet of snow on the ground, it's minus four degrees and tonight's mammoth gig is to be held inside Helsinki Ice Stadium. Hell, It's too cold to live let alone rock.

"Ladies and gentlemen," screams guitarist Suzie Gardener, "The soft white beer belly of rock'n'roll - L Fucking 7!"
Well if anyone's gonna break the ice it's the band. L7 give better than they get, but the kids don't get it at all.
There's 9,000 shivering punters in here, 7,500 of which have blank faces. Look, forget there's four 'chicks' up there. Close your eyes if you have to. Just stop gawping and dance. L7 aren't half arsed rockers, they trample over most of their rivals, they don't want to be blokes. They aren't playing a man's game, L7 are playing music, music that says so much more than merely suck this. LA's L7 are natural performers nad nothing about them is fake, so when Donita rocks out and grapples with her 'axe' during 'Wargasm' it doesn't look misplaced or ludicrous - it looks real, because L7 have convincing songs to support their actions. Real, dynamic, secretly sensitive, life affirming songs, which fall somewhere between the Beastie Boys and the Ramones. Brilliant.

Faith No More are a phenomenon: a stadium rock band who really don't fit in with the whole rock grandeur, FNM are also a sensitive lot, although their sensitivity is as twisted and tormented as vocalist Mike Patton's melodies. 'Be Aggressive' (all about swallowing semen!) could be all trousers and no brain but instead the lyrics reek of understanding; "Tall and reckless / Ugly seed / Reach Down my throat / You filthy bird that's all I need."
Then there's tonight's classic cover versions; The Commodore's 'Easy' and The Dead Kennedy 'Let's lynch The Landlord', which infiltrate their own headstrong panic attacks.
FNM stretch their own limitations and the starched boundaries of their ill fitting genre. Take the rap-like 'We
Care A Lot'  or 'Epic', the all-out thrash of 'RV' or 'Midlife Crisis' then try and fit in 'Easy'. Confused? You will be. Hanging behind the hairy guitarist is a banner which reads, 'Jim Martin is the techno king'. Jim Martin looks like he should be in Thin Lizzy. In fact they all look like they should be in different bands - which is how they manage to slip from soul to jazz, from funk to thrash, so easily. Time to wade through the shite and allow Mike Patton to take us to his demented world - a warming thought indeed .

Whilst in Finland Faith No More had time to participate in various TV shows for MTV.