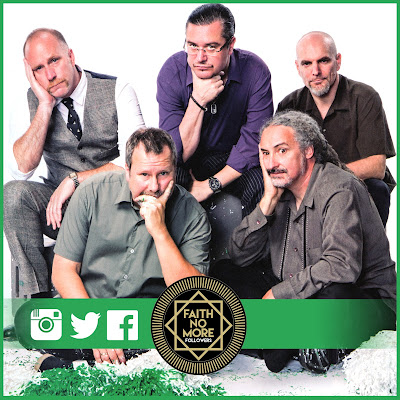 Here are some highlights from a great in depth and lengthy interview with Mike Bordin in the UK drum magazine Modern Drummer.

MD: What was the impetus to get the band back together for the Second Coming Tour back in 2009?

Mike: Our manager called the core of us together and said, “Look, there’s a lot of people who are interested in seeing Faith No More—have you guys considered it?” Every one of us had a job, and I mean that in the best possible way. I was playing with Ozzy, Mike has a million bands, Roddy has Imperial Teen and he’s scoring films and TV shows, Bill is playing in bands and producing records. So honestly, we’d never even considered it. Everybody was pretty good with where they were, but that definitely got the conversation started.

We didn’t have a big plan. We just got together in a rehearsal room and it felt good, so we did some shows. And when the shows started getting into the couple dozen, and the band started getting pretty strong, we were like, “Okay, now either we’re done, or we’re going to have something else to say.” Because if you don’t have something new to say and you just keep carrying on, it becomes nostalgic. Nobody was here to do nostalgia. No one was here to recreate a time when we had less gray hair and more brain cells, you know? [laughs]

So new music came. It came honestly, it came gradually, and in my opinion, it came correctly. A lot of people will do it the opposite: “Well, you’re doing a reunion tour, you’ve got to have a new album to promote.” But if you haven’t played together in fifteen years, how the hell are you supposed to be comfortable with each other? We have our own language and it’s not only musical—it’s emotional and physical, as well. It’s a unique thing and we had to give it time to work. And that’s what happened. It’s been a crazy, cool gift to have a second chance to do this again with more experience and more perspective under our collective belts.

MD: Watching you play, it’s clear that you still just live and breathe drumming, like you were born to do only this. How old were you when you started?

Mike: I was thirteen years old. It was 1975 and I was sitting in my friend Cliff Burton’s bedroom and he said, “Hey man, I’m going to play bass.” And I said, “Okay, I’ll play drums.” It was a total knee-jerk reaction. It was completely unthought-out. And from the moment I started playing it kind of took over for me. It was an obsession, but it was positive. It was something that kept me out of trouble and defined those middle years where I could’ve gone way off the rails and gone the wrong direction. When I first met Ozzy I told him, “You don’t know me, but Black Sabbath saved my life.” And that’s the power of music. That’s the beauty of it. It’s transformative.

Mike: Yeah, we’d already been friends for three years or so—at that time that’s like a third of your conscious life! And we just loved music, all kinds of music. A major turning point was when the two of us saw the Sex Pistols at Winterland. Would you have guessed that judging by where Cliff ended up professionally? Maybe you would, but the point is, we were open-minded. We were open to evolution. Evolution is important. You’ve got two choices: you’ve got to roll with it or it’s going to roll right over you.

MD: Were you self-taught?

Mike: Well, yes and no. I learned the basics from a guy who was one of the satellite teachers for this dude Chuck Brown, a pretty renowned drum guru and old-school badass here in the Bay Area. We worked out of Charles Dowd’s Funky Primer and Benjamin Podemski’s Standard Snare Drum Method, stuff like that. Then a few years later I studied with this dude from Ghana in a class at Berkeley that was a group percussion ensemble that had nothing to do with the drumkit. He would dance and sing and talk in different rhythms, and clap his hands in different formations and patterns. At the same time I was listening to guys like Paul Ferguson from Killing Joke and Pete de Freitas, who played in Echo and the Bunnymen—guys who played these amazing tom patterns. So I would say that I walked up to the banquet table and tried all the different things in the smorgasbord and sort of took what worked for me, you know?

UOL: The last album the band has released 18 years ago.  After all this time, what is the formula for  launching something new without losing your original identity?

Mike Bordin:  I will not ask how you felt when listening to the new album, but I can say we love it and are proud. The only way we could do that was honestly. There would be no way to force us to make a new album if he had a lot of emotion involved. Billy [Gould] worked on the record literally every day for three years. You can’t do something if you don’t believe. In the United States we have a saying, that is' mail it in ', meaning:' I do not care. I'll just do enough and ok '. We are the opposite.

Back to play along with Faith No More was like a reunion of high school friends?

I think so. We have a lot in common. Our life has been lived together. We started adolescents and separated after 30 years. And now we are older. We realized that we did a great job together.

Each member returned to the studio, 18 years later, with a different cultural background. How integrated these differences to the new job?

We went in opposite directions. I, for one,  was playing with Ozzy Osbourne and did for over ten years. His music is completely different from what I did with the other guys. When we returned, it was like adjusting the focus. When you are young, you need to work hard. When you're older, you need to work intelligently, because we learned many things along the way. We work now intelligently.

What are the differences and similarities of the band 20 years ago?

We remain a consistent band. I sincerely believe that we have one of the best rock singers. No one sings better than Mike Patton. On stage, we give blood and tears to the public. But I feel that we are now different. And in a good way, because I feel that we are now on the same wavelength. When we were young we did not know that. We are super close. I am a team guy. I play drums, help people to do what they need to do on stage. My relationship with Faith No More is very solid.

This is the second time you will play at Rock in Rio [the first was in 1991]. Already feel close the festival?

I know people who say the show 1991 was memorable. For us too, and it's an honour to come back, knowing  that there are people who remember that show. Let's do everything we can to repeat.

The video for the new track "Sunny Side Up" was done on a small stage. Do you consider it a stadium band or small clubs?

We are two types. We are different each time. The important thing is to be ready to do both. It's nice a big stage with lots of lights and sound. But I also like the small stages where you can see people up close. Recently we did a show at the Troubador [small rock club in Los Angeles] and people said they had never seen a show so amazing of Faith No More.

Corey Taylor, Slipknot frontman, said he tried to kill himself after 19 years. When he returned from the hospital and turned on the TV, I was playing "Epic" by Faith No More, and he found what he wanted to do for life. And this Rock in Rio you will play on the same night.

It was a sign, right? He turned on the TV at the same time. I met Corey, it is a very nice guy. It means a lot to us that our band helped him. Although Faith No More is of another generation and do a different sound than them, I'm happy to play on the same night. They are young and part of one of the major bands in the world. It is wonderful to know that they are our fans.

Do you think that music is so powerful as to save someone's life?

Of course! Music is able to do anything. The music power is absolute. Certainly it was music that brought me here. I was a guy at the end of life, and she saved me. I did wrong things, hung out with the wrong people. There was no hope for me. Black Sabbath was that saved my life. After I heard Ozzy I thought, "Wow." They sang everything I was thinking.

You touched on Ozzy's solo band for over ten years. How was your relationship with him?

He meant a lot to me. I just wanted to say thank you to him. As I worked with him, the only thing I was doing was giving back all that his music had done for me. And in Brazil, I want people to realize that we are giving all we have really. We do not sit on stage and wasted their time and our time.