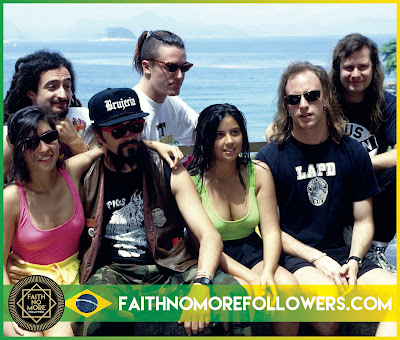 As Faith No More prepare to return to countries in which they are revered like gods, the media flood begins...Apologies for the crude translations.

Virgula
Bill Gould briefly talks to Virgula about their return to Brazil.

"It was the first time we played in South America. That show was amazing because I think it was the biggest show we'd done so far. We had never played anything so great. It was our first contact with Brazil and it was a crazy weekend. We spent three days at the Rock in Rio, went wild at the hotel. Because of the success of this show, we went back to play in Brazil around three or four months later."

About what the Brazilian fans can look forward to in Brazil, he gets straight to the point: "They will cry, we'll make them cry," promises the bassist.

"It will certainly be different, but we are very anxious, for sure," says the musician about their sixth tour of Brazil. "We didn't make new music together for 18 years. In this time, almost 20 years, so we were very different people in this return. Much like the result and why we're doing this tour. We would be another 18 years of good if we had not liked, " he says.

Bill, who has a good collection of Brazilian music at home, said that both concerts indoors in smaller places, in the style of Space of the Americas, as of mega festivals, like the Rock in Rio, has its pros and cons. "Festivals can be very powerful when all people join the wave together. But small places can be cool too. For us to be on the stage, both big and small places require concentration and energy." 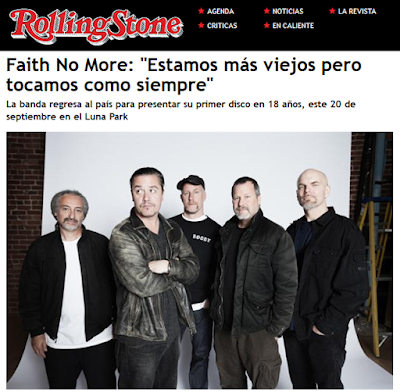 Rolling Stone (Argentina)
Bill talks to the Argentinian press about the upcoming show at Luna Park.

Faith No More: "Estamos más viejos pero tocamos como siempre"
The band returns to the country to present their first album in 18 years, this September 20 at Luna Park

It took 18 years after Album of The Year and after the reunion you played a long time without new material. At what point do you realise that you had to make a record?

I always thought we should do, since we met. I was always waiting to do something creative during this time. The first time we tried something new was the last time we were in Buenos Aires, we played a song called "Matador". The song went very well there so we decided we had to go that way.

Would you have endured just doing shows with your old hits? Many bands do.

Yes, many do, I think it is because they are proud of the music they made and there's nothing wrong with that. I would get bored, would not be happy with that but it's music, there are no rules in music.

How were the first steps in the room go to Sol Invictus?

It was a collaboration between everyone.It had to take it's course and that happened when everyone was ready, so we waited and it did. Almost always, all the time, Mike [Patton] likes to join when the songs already have all the arrangements and then tries to fit into what is already there, we prefer the framework to be ready within which to work.

It seems as if Patton came to give the final touch, is that so?

His vocal talent is his primary contribution to the album. He has been making records for a long time, he has a good ear for the details but he's not the one that gives the final touch, that we do together.

The new album includes moments of folk, surf, and many other crossovers to which we are accustomed. Is there a style that have tried to adapt to the band and never worked out?

Many, but you'll never hear! We will never publish. Often we do experiments but fail miserably every time we remove everything that happens instantaneously. Personally I do not believe in styles, it's music, it is like cooking a soup: it has rich taste or it doesn't.

Sol Invictus seems to fit in perfectly with the discography of the band. How would you define the sound of the album?

I like to think that is an album with depth. It is an album that I feel could be in our record collection for over 20 years but at the same time I think it has a sound that brings me to a place I had never been with my band mates. It makes me feel like I'm going into new territory.

The last time we were in Buenos Aires presented new material, what can we expect of you in this show?

We are playing new music, I'm extremely happy with how the fans are unexpectedly getting the new songs. The shows are going very well so we guess it will be a concert like other concerts of Faith No More, we are a bit older but we play like always or perhaps better. Same old shit, but better ... Ha!
Labels: 2015 Argentina Bill Gould Brazil Faith no more Sol Invictus