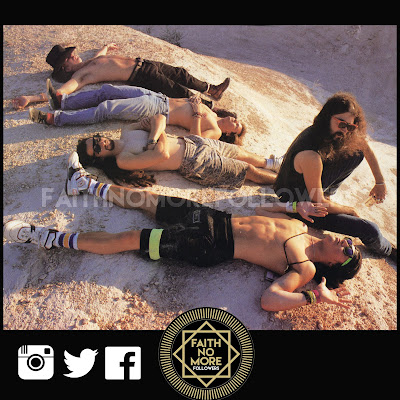 
Faith No More vs Utah
By Steffan Chirazi

No longer do Faith No More struggle to be known. A bold statement, yes; an unfounded one, no. Unless you happen to be away on a permanent mental vacation in La La Land, you will have seen Faith No More's touring exploits take a dramatic surge upward, with this surge being capped off by 13 support shows with Metallica on the West Coast. Things like this don't happen by accident. Uh-uh, certainly not. It's been a long time coming not without thought and certainly not just a matter of business as usual. In fact, this whole tour came down to priceless things like friendship and peer respect. If you haven't yet purchased The Real Thing, maybe when I tell you that Lars, James, Jason and Kirk all swear by it, you'll kick your stupid lazy ass into gear and buy some real candy for your stale old ears. Whatever it takes.

Our little story begins somewhere between New York and Boise, Idaho, where Faith No More were in transit to for their first show with Metallica. They were in a van. Yeah, no luxury buses with TVs and VCRs here. And no stopping for anything other than gas or food between New York and Idaho, an ugly, filthy little trip that was listed in the itinerary as roughly 2,440 miles and 45 1/2 hours of driving. Mike 'Puffimilius Maximilius the 9th' Bordin is fidgeting with his hands, asking the usual road-transit questions, such as, "What time is it?" "Do we need gas?" and "What about some food, eh?" Jim "Pig Mask" Martin is at the wheel, and employs his usual "F?!k you, pussy" tactic of not stopping for anything aor one other than an empty gas tank. "If
people wanna pee, they can goddamn well pee their pants. Nooo stopping unless for gas," he once said to me a while back— and it's the truth!

When the band arrives in Boise, the most worrying thing is bassist Bill Gould's flickering eye. Murderous. Hideous. A nervous reaction to inner tensions. Whenever Bill is feeling a touch testy with life, lack of sleep or his situation, he will suffer a flickering eye, a manic grin and a gurgle of nervous laughter falling from his throat. Despite this and Martin's broken guitar, the first show
goes just fine, with the crowd responding well, if not overzealously. Fast forward to Salt Lake City, and Faith No Mare's most fiery taste of harshness at the hands of idiots. Why anyone should expect a good reaction, or even a courteous one, in a stagnant time-hold like Salt Lake, I don't know; but got neither. Indeed so enraged became the crowd, that Bill felt it necessary to step out there at the end of the set and give them all a little bass solo—a one-notewonder plod for two minutes, which resulted in him getting showered in mucous from the dumb-ass mouths of the crowd. 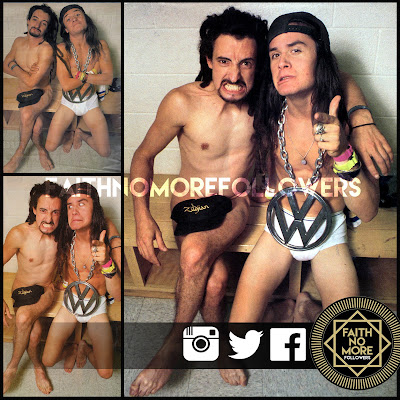 Las Vegas was where things really started to gel between band and audience. Despite singer Mike Patton's voice showing a few hoarse cracks, the Vegas crowd were attuned to FNM's raucous, slaphappy, spazz-dance styles and beats—enough to find them enthusiastically shouting during "Surprise! You're Dead!" FNM's headwhipper of a tune. Earlier in the day photographer Ross Halfin managed to coax the band into doing some shots in their underwear except for Puffimilius, who thought it bigger to go the full way: naked in the desert with Halfin taking fully focused advantage. What sort of mind concedes to indulge in this sort of behaviour? After the Vegas show Martin eyed the ever-cheerful and highly talkative Patton with a certain distaste. "Hey, man, if your voice is givin' way, why dontcha quit f?!king
talkin' all the f?!king' time? Give yer throat a rest, will ya?" Martin stalks off, to later appear during Metallica's "Last Caress" cover as a resplendent, filthy and drunken bum, offering some niggardly vocal contribution before stumbling off once again. Bastard.

No one really seems to talk too much about Rockin' Roddy Bottum anywhere; so let's allow ourselves an insight. Roddy's as cool as they can be, ice for blood, a smile usually in full danger of leaping across his face. Having seen this band over a few tours now, Roddy is maybe the member who has most benefited from the change of singer, thus change of attitude, thus change of pace, equaling superior productivity from the band as a unit. Never one to seek confrontation, Bottum appears to play with more heart and behave with more freedom. No longer does he take a passive line live. These days, on these shows, Roddy's frame can be seen tilting violently, a tree in a hurricane, ready to fall forcibly forward, only to pull up at the last. His contribution these days is cog like. Quite simply, without Roddy Bottum, it wouldn't happen in the same way. And on this tour, for maybe the first time that eyes have seen it for real, Roddy Bottum is really and truly enjoying being a member of Faith No More.

The Bay Area shows, of course, see Faith No More play to a home audience that is appreciative, if not wild. Wild? That accolade belongs to the crowd in Reno, where it took this band to prove that Reno isn't just a hostel for creepy little nearly-people and drifters. The audience ripped the very heart out of Faith No More, cherishing every last bite, wolfing them down and screeching for more. You haven't seen much until you've seen Jim Martin come out from his usual "dontgiveaf?!k" stance up on the boards, raise his arms and punch high, arena-style, evoking a huge roar. Maybe he really can become a guitar hero one day. He's starting to learn those moves

Due to a trip to Mexico City, I miss the Sacramento show, which was, by all accounts, a fat stormer. Upon hooking up with the band in L.A., I discover another Faith No More event. It is backstage at Irvine Meadows that jovial roadie Dave is peeling back the grubby layers of his life story to the amusement of myself, Bill and Jim. Turns out that Dave's readied for King Diamond quite regularly, and that an old girlfriend of his is a suspected satanist. Now he's looking after Jim Martin's guitar needs. This should tell you something about the life that Dave is obviously meant to lead. No one in L.A. ever managed to actually tell who was there to see the shows at Irvine, but with Faith No More's celebrity booster club running at absurdly and humorously high levels, I'm sure star spotting wouldn't have been too tough. Allow me to name some FNM supporters: Axl Rose, Slash, Rick Savage, Joe Elliott, Scott lan, Bono, The Edge and probably a few more since. This list doesn't include last year's founding member, Robert Plant. Not that the band really seems to notice. "So? What the f?!k? It's real nice to have these people like you, but what does it mean in the end? That someone's gonna buy your album because 'They' like it? Well, if that's the case, cool. I'm happy. Whatever it takes, whatever, y'know. I'll just get on with playing," said Bordin in a writhing knot of rhetorical
questions.

The Irvine shows take on lives of their own, and Faith No More jam up a passionate series of displays. During the 13-date stint, James Hetfield has been coming out for a quick jam and riff with Martin on "War Pigs," and in the last six or so, Kirk Hammett has been waltzing out during "Epic" to play this little co-lead thing that he and Martin have spent soundcheck time working out in various tuning rooms. It works very nicely too. But while half of the L.A. crowd reacts to FNM's sets with loud cheers and obvious admiration, there is another fragment that is booing. I could give another lecture on stupidity, but if those people couldn't appreciate good music when they heard it, it's doubtful if they can read. Twats. 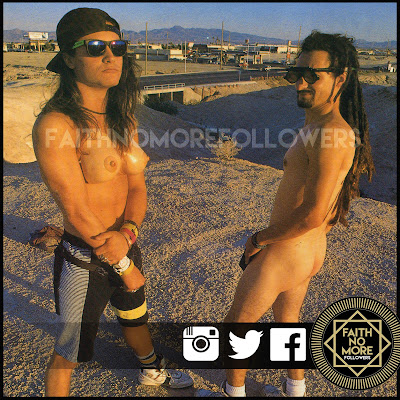 By the time Faith No More pack into their van at the last Irvine show to head off for Hollywood Live and their closing performance as headliners for the Concrete Rirum, the mood is running high. God help anyone if they put Martin within sight of a bullhorn—at the rate and volume he's speaking, city blocks would be deafened; and Bill's flickering eye has taken on some seriously murderous slants. You never can tell quite when William's going to try and shed his anger. The hall in Hollywood Live is packed—stuffed to the gills with people itching to see a band that justifies all their hype. They will not be let down. Faith No More rip into as hard, tough, agile and brilliant an indoor show as I have seen them play. Flipping and tearing at the minds of all, amid the sweaty stage diving of major fan Axl and famous fan Dino, the ferocity of this beast seems to have been let out without any warning. One show to 18,000 people some five hours earlier hasn't dampened the enthusiasm of the band any—indeed, some band members seem mighty happy to be causing such pleasurable discomfort to everyone in the hall. "I dunno, I just really like the smaller halls, the tighter crowds, gets you right in there with them," says Bill, and he isn't the only one revelling in the scene. So happy is he that he treats the crowd to one of his highly special one-note bass solos, head bunched over into his knees, throbbing out some wild, f?!ked-up note that Martin sees needs some Morley-fired accompaniment. Until Patton pulls the cord on each of them, and the band kicks into encoring, there was a real threat of some mental destruction, the two having painted some wild, screwed up aural strobe with their incessant poundings.

At the end of the set Puffimitius, for reasons really known only to him, kicks his kit over, pops his V vein and looks like he's going to use a drumstick as a club. He later explains that every time he hit a drum, because his kit was poorly erected, the sticks kept hitting him in the face on the rebound. Which is highly ugly. Yet things usually are when Faith No More take to the trail. The band is now a more cohesive, productive unit than ever before. Their musicianship reaches the heights it so easily can on a more consistent basis, and their show remains as agile and combustible a spectacle as ever. "Yeah, it just was getting prettyboring being seen as this 'We're so silly and wild, f?!k around, all-joke deal," sighs Bill. "I don't wanna to make us into this serious band shit, but a little less of the silliness would be coot." Gould had said this to me some weeks back, as Faith No More were warming up for their Metallica  slot. And as they prepare to play your town once more, Europe having had six weeks of them recently, I can promise you a full and plentiful package. The humour remains, and the working unit just gets better and better. 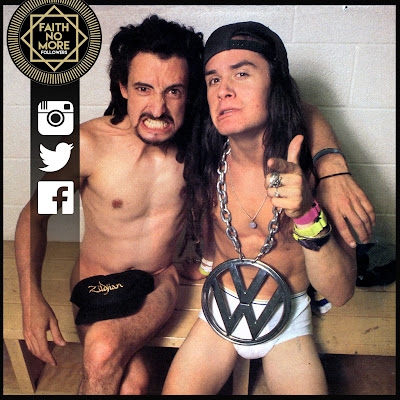