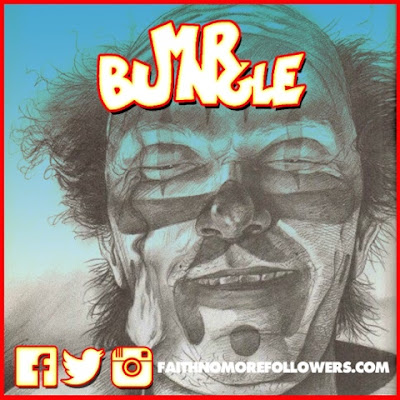 
But here's a brief list of the topics covered on Mr Bungle's début.
Sex with footwear
Pus draining
Oral sex with cultural icons
Viscous secretions and other bodily fluids
Bondage fantasies
Phone sex
Body parts and how they fit together
PG-rated movie stars
X-rated movie stars
The alimentary canal
Beethoven
Oedipus
Vegetables
Meat
And after all, isn't that what life is all about?"

On this day in 1991 Mr Bungle released their eponymous debut album through Warner Brothers. This album changed the people's perception of a Mike Patton they thought they had come to understand via Faith No More's 'The Real Thing'. The album expertly pieces together different genres and themes to create a schizophrenic masterpiece unlike anything before or after. The musicianship of the six members is outstanding. This is our tribute to Mr Bungle. 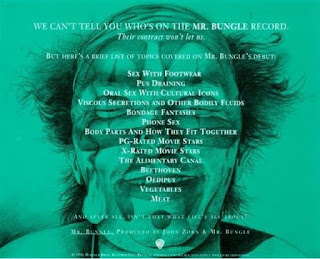 Anything I could say to you in this review would not adequately describe  Mr Bungle. Put it this way; if you think  Faith No More are a progressive, alternative answer to rock's most isolationist, humdrum elements, Mr Bungle make FNM sound positively mainstream.
Of course there is a link between the two: singer Mike Patton (known here as Vlad Drac) fronts both bands and brings his eccentric stamp of personality to both. But with Mr Bungle, his character is magnified to the hundredth power: and his talk about playing with himself in interviews is manifested here in his lyrics, as sleazy a slimefest as you're likely to find on a major record label (just check out 'Girls Of Porn', which also provides a clue to the origin of the band's name).
Simply put, Patton flies, somersaults, tumbles and slinks all over this album, but it's par for the course as Mr Bungle are nothing if not a musical roller coaster ride that takes you 500 feet in the air, drops you like a rock, sends you spinning out of control and ass over tea kettle before bringing you down - albeit none too gently.
Metal, punk, rap, funk, jazz, classical derivation, gothic horror film music, video game sound effects - it's all here. The songs are more like symphonies of the bizarre, often slipping into various combinations of all of the above genres throughout their length. Honestly, I'd be hard pressed to remember exactly how 'Travolta' goes as it never quite comes back to the same place - but when it's over the track's sheer energy and improvisation leaves you breathless.
On the other hand 'Carousel' rumbles along on an ominous chorus and funky scratch-mix sensibility, while 'Girls Of Porn' comes down hard with a throbbing groove shuffle and monstrous riffage. The entire album crackles with a weird electricity and the air of a rock and roll circus gone insane. Which is possibly the closest anyone will ever come to describe Mr Bungle.

The puerile rantings or wretched mutations of American youth, or one of the most original forms of noise to be committed to vinyl this year? Take your pick, Mr.Bungle are at once chaotic, cataclysmic, powerful, deranged and uncomfortable listening. This band would probably never have surfaced on a major label, if it weren't for the current fascination for their reluctant star and vocalist, Mike Patton, whose presence will obviously interest a lot of parties who would have otherwise cast this aside as too surreal and offbeat for mass consumption. But it is as far removed from FNM as Mr.Patton probably meant it to be.
For those who managed to get a copy of the brilliant (now deleted) Bungle demo tape OU818, there will be some surprises. The expansive production by John Zorn has added layers of eccentric, and sometimes just too unpalatable, background to reworked tracks that graced the aforementioned demo, like "The Girls Of Porn" and "Squeeze Me Macaroni". Where before these appealed for their laid back idiocy, there now lurks a sharp edge of aural insanity, that at times has a touch too much frenzied input for the ears to take in. Even the sampling of the innocuously irritating Nintendo Mario Brothers theme tune takes on a sinister air in the context of this majestically manic me-lee.
Yet it remains absorbing, if only for the infectious bass riffs, a brilliantly innovative horn section and its ability to bounce through more chops and changes per song than most bands manage in a whole lifetime. "Egg" is a case in hand, a screaming cachophony of jazz encrusted mad opera, "there's no place like home", gurgles Patton, like a man committing his nervous breakdown onto vinyl. His ability to run riot over his vocal scale, from the highest pig like squeal to the lowest demonic growl with ease, is at once scary and magnificent.
Lyrically, no subject is too scary or too sordid for Bungle to explore. Littered with various profanities and running the gamut from masturbation to bestiality, most of it is designed to offend, but its schoolboy mentality ensures that it only amuses. "I was giving some head to some French bread / It was a four course orgy on the spread of my bed / I get better penetration with a fork and a spoon" Shocking to some maybe, but more likely, Patton's attempt to distance himself from the pretty poster boy image he's so obviously trying to escape.
If you can imagine Zappa on bad acid, then you'll get a fair idea of what this album entails. But if you prefer your listening more laidback and harmonious, here's some advice: take a Valium - it's not going to be an easy ride.

The joke of the month does not come from Bonn [capital of germany it's from the United States, because what Mike Patton and his friends has produced under the ominous name Mr.Bungle is topping everything that had ever exist in this category. They are moving respect-less from one track to the other.Starting with free jazz, funk, rap, hip hop, ska over to the dumb metal grunt - the band does not stop for anything. In doing so they formed the past decades of music history to an exciting, lovely 50 minutes joyride. One time it sounds ridiculous, the other it's a perfect quotation. I know this all sounds unusual, yes it tests the nerves af the author of this article, so that dislikes are involved with this review. Therefore this album, which really does not contain one single song, should be taken as it is; an exciting, odd, sometimes a crude collection of musical pieces. Not more and not less.

No More Faith. Mr, Bungle is not the son of any famous father. Mike Patton's alter-ego is a rough-hewn, crusty individual stripped from the soul of a dancing psycho's clubfoot. Parentage unknown but spiritual guardians aplenty. It's all a conspiracy, you know. Some time ago in America, an inner sanctum of radical young movers swore to subvert the traditions of metal and rock 'n' roll, those two most conservative of bastions. A few years later, Mr. Bungle rears his malformed skull and gyrates through the pores of an audience now primed and willing to accept anything. Anything from the Specials and The Mothers mangle by Bart Simpson on 'Stubb (A Dub)', to the menacing metal-ska carousel of 'Travolta', through the pure sleazy funk of 'Girls Of Porn'. Everything yet nothing. If you find a pigeon-hole for this, the odds are it will already be inhabited by a perverted winged-creature, lapping out a grotesque melody on a bontempi organ through a Marshall stack. Hold it. Don't dismiss this as crypto-Journalistic claptrap. Take a risk. Here's a clue. Eclectic is a word that sounds like electric, ends like hectic and rhymes with quintessential. Your Move, And remember, we're playing off the board.

Images used for the front cover and various pages inside are illustrated by Dan Sweetman and taken from issue #1 'A Cotton Candy Autopsy' of the comic book series 'Beautiful Stories For Ugly Children'.

The inside work is by P.Earwig.

The reverse image is taken from this advert.

Teach Me Violence, issue #1
By A. Keane Stern