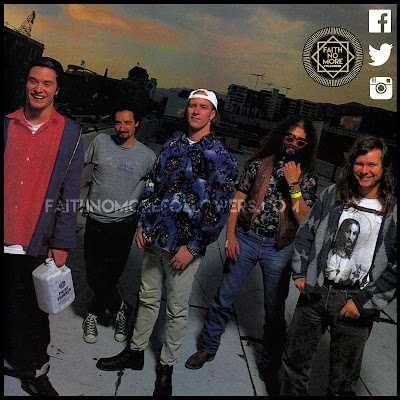 Angel Dust may seriously damage your mental health, but Faith No More's version is seriously good for your ears. Jeremy Sheaffe spoke with Mike Patton and Billy Gould, but still couldn't find out what a Jizzlobber really is!

See! It really isn't easy trying to make sense of all this. And if you've heard any of 'Angel Dust' you'll understand exactly why that is. Faith No More (who, apart from the reprobates already mentioned, is made up of Roddy Bottum on keyboards, Jim Martin on guitars, and Mike Bordin on drums) are not out to do what you expect of them, but merely to do what they expect of themselves. 'Angel Dust' is by no means just a follow-up album to the hugely successful, chart-shaking 'The Real Thing'. No, this is the San Franciscan quintet's fourth album and it will stand or fall on its own merits.
"When we did 'The Real Thing'," exlpains Billy, "we had a tiny budget, we were broke and on top of that nobody really gave a shit about us. Nobody knew what kind of music we played and nobody could classify us. We were at a real disadvantage in those days, but now we're at a real advantage." Adding to the advantageous position the band find themselves in is the fact that all through June and most of July this year they joined Spundgarden as support to the metal circus that is Guns 'N' Roses' European tour. And then, from July 17 to who knows when, they'll be warming the stage for Metallica and the Gunners on their co-headlining jaunt around America. Rock 'n' roll or wot?
"Oh God yes," agrees the now short-haired Patton. "Its a total spectacle, a sick circus..."
And what part of this sideshow do Faith No More play? My guess is the freak show, or perhaps the clowns. I'm wrong again.
"We're not even involved. We're just watching it. Guns 'N' Roses are the circus... it's amazing... it's just a lot of money and way too much time to spend it in."

Continuing the theory that Faith No More never really listen to each other, or totally disregard what the others say, Billy Gould thinks "it's fucking amazing that we even got on the tour, one of the biggest tours in the world. I don't know... I mean, aesthetically we're different!
"I think it's good though. I've gotta give Guns 'N" Roses credit, and give Metallica credit, too. Right now it's really responsible of them to pick bands that are different because they didn't have to do that. They could pretty much tour with anybody."
Referring back to the tour's carnival atmosphere and blatant excess, and hinting at Faith No More's unerring ability to be the fly in the ointment, Patton adds, "It's more like you see so many thing that are fucked up that you wanna say something - and we're already pushing it. The amazing thing is that everybody knows something is going to happen," he laughs. "By the time we get to the States, I'm sure something will have happened!" Mike didn't have to wait very long for something to happen. On the day of our interview, Guns 'N' Roses decided, two hours before they were due on stage, that Axl was "too exhausted" to play to 30, 000 eager fans in Manchester, England.

Billy says that kind of thing has happened every day, that the Gunners go on stage late "all the time. We wouldn't do it, so I don't know why it is. I'd like to know myself!"
A few months back in Hot Metal Billy was quoted as saying that 'Angel Dust' would either be a huge flop or would sell by the truckload. The verdict is still in the balance, a bit of a hung jury, as they say in 'LA Law'. "I just think that way," says Billy, who's still not sure himself which way the album will go but seems confident, that, like the band, it will never occupy any sort of middle ground. "I think that what we did was to take a chance here. I think we could've played it safe and just redone the last record, and that would have done really well.
"But," he says, his voice strengthening, "we didn't opt for that, so I've got no idea what'll happen with this. All I know is that we made the best record we could. We did our best job, and what more could you expect?"

What more could we expect? Well, given Faith No More's past record as full-on eccentrics, we could expect some startling press statement saying that Mike's gonna join Mr. Bungle full time, or that Jim Martin has killed the rest of the band. C'mon Bill, and start living up toy your reputation - you're starting to make me look stupid with all this normality. Read the first paragraph, Bill, I'm trying to make you guys look weird!
"That's an easy angle to take, it's easy to write that stuff because it's right there. It's the most obvious angle, but it's not necessarily the most interesting. I mean, how many times can people get interested reading about the same thing, y'know?"
But, I moan, that's part of the challenge of interviewing a member of Faith No More. Like I pointed out before, ask any two members the same question and you'll get two very different answers. Bastards.
"There is really no one to answer these things," argues Bill. :If you want an interesting interview with me ask me what Czechoslovakia was like, talk about things that maybe we've seen, travel or something. Things other people might find interesting.

"When it comes to writing songs, the material is something we do unconsciously. We're musicians and we're in a band and we write songs - it's not something that we analyse. It's hard to analyse what you do naturally, it's really kinda difficult. It's especially difficult to say it in an interesting way because it's a little too close. It seems natural, it's what we do naturally." Then, as a footnote, he asks, "Does that make sense?" Maybe, but either way I'll follow Bill's lead and ask him what it was like to play in these places. Did that blow some misconceptions he'd had? "You just don't know until you go there. We just played what used to be the Eastern Bloc. We played Hungary and Czechoslovakia - Prague is one of the most beautiful places in the world. When we played Hungary people were coming from Bulgaria, Macedonia... These people were coming from places that were out there, way out in the middle of fucking nowhere, and they were driving this far and they knew about us and wanted to come to the show."
Bill's on a bit of a roll now. He certainly can show a much more mature side to himself on occasion, and this is one of those times. "It made me realise that there is no money to be made by being in a band and touring out there, but two-thirds of the world's population lives in these place," he adds. "I think it's really total bullshit, that when we do these interviews we're just doing it to get people to spend money on the record, so we can charge the highest ticket price and charge the highest T-shirt price. All the people who have the money imagine anywhere else that's not like where they live as being full of fucking primitives who live in caves or spend all their times in death squads, shooting people. Of course it's not like that!"


"I took the tape home and put it in my VCR and it was like 'Oh my God!' I didn't expect that at all, especially from a little girl. The fan who gave it to me was like a teenager and the girl in the film, she was probably 12, 11."

Are there really so many answers for the one simple question? Yep, there certainly are. And why? Well, because this, my friends, is the Faith No More way. 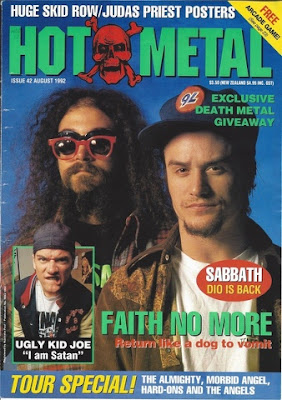