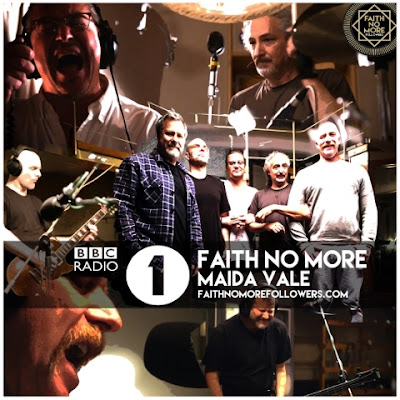 Hopefully by now we have all had the chance to hear and watch the unbelievable session in the famous Maida Vale studios.

Faith No More were performance perfect. It is easy to be overcome by their intensity and passion during this session. The production of both the music and filming by TBI media were stunning, making the whole package one of the best recorded Faith No More studio appearances to date.
The choice of songs was faultless. A selection of best from 'Sol Invictus', plus sublime rendition of the Burt Bacharach song 'This Guy's In Love With You', their only studio version. This was without doubt the best the band has played the song yet, particularity with the addition of a live piano rather than Roddy Bottum's synthesised sounds.

We asked Roddy Bottum about the experience:

The Maida Vale show was interesting because we’d been on tour at the time and playing every night. The sound on stage is much much different. On stage it’s a bit of a cacophony. Maida Vale allowed us to hear everything super specifically and precisely.  It’ kind of upped the ante in terms of playing together. There’s also a lot of history in that building that made the experience really special.

This show will go down in FMM history as one of the greats.

The show is still available to listen to on BBC IPlayer.