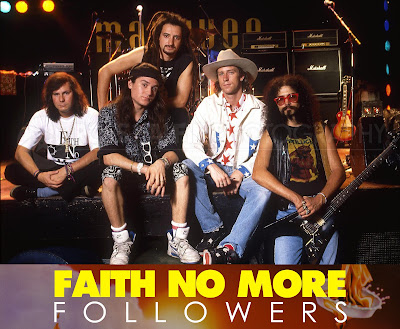 On this day in 1989 Faith No More were touring 'The Real Thing' in the UK.

This was also Mike Patton's first ever tour outside the USA. The first venue, Edwards No.8 in Birmingham, the second date in Manchester and the third on July 4th at the Marquee Club in London.

What follows is a short review of this show published in Sounds.

NOW WE know why their new LP is called 'The Real Thing'. When former vocalist Chuck Mosley  made his acrimonious exit last year, the thought that Faith No More had imploded before take-off was a grim one indeed. For those of us whose minds were unalterably scarred by their high-risk, viciously executed barrage, it was akin to losing a limb.
From chaos comes, well, a sort of order; FNM are still at odds with the world and have lost none of their confusion or danger - but now they've turned it outwards instead of inwards.
New singer Mike Patton's vinyl performance may have hinted at a certain something lacking but, onstage, there are no worries. Faith No More are now realising the multi-pronged vision you knew was always there, but had never achieved before, FNM were devastating. They began with 'Chinese Arithmetic', the strongest song from the last LP, followed by a demented version of the title track itself, 'Introduce Yourself', after a frenzied moment of drum repairing. Whatever demon drummer Mike Bordin exercises every night, you sure are glad there's a set of skins for him to take it out on. The new material furthers FNM's exploration of uncharted rock territories - their brutal rhythms are now more colourful, more thoughtful, more up, but brutal all the same. It's the weirdest metal you'll ever hear, a sauna for the soul.
For 'Surprise' You're Dead!' Roddy Bottum crouches and gesticulates insanely over his keyboards, bassist Bill Gould and gonzoid guitarist Jim Martin headbang in unison and Patton prowls. Jigs and dodges between the stage divers. Last year's mini-hit 'We Care A Lot' multiplies the aerobatics; if FNM were intense then, they're positively roaring now. FNM have hold of something dark and rare and fantastic, a combination of mind and body that's way out there on its own - a one-off. When they're crap, they're really god-awfulbut when everything connects like it did at The Marquee.
Ah, you get the idea. The meek shall inherit shit; Faith No More are the real thing, alright. 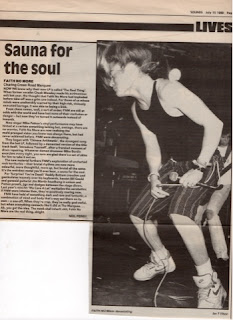 One year later and FNM are back State-side. The Ritz in New York to be be precise. Of course we have a review of this show too.

Just a brief word on Mind Funk who are getting to be the talk of the town and who I had the opportunity to see for the first lime this evening. They turned in a very solid performance, and the last five songs or so really dug some iron boots into my spine. There's still some fine tuning to be done, but the future looks promising.
I'm not sure what the future holds for Circus Of Power and tonight's set hinted towards some very disturbing notions. Rumour has it that certain members of the quintet are not getting along very well, and a tension seemed almost palpable on the stage. Sure, the band were tight, and numbers like 'Doctor Potion' and 'Motor' cruised along with suitable power but something was lacking.
Maybe I was imagining things, but there seemed to be no chemistry between the musicians. It reminded me of the last Dokken show I saw, with each member keeping to his own little pocket of the stage. Things were much the same here, and although the show had its musical high points, COP'S demeanour left me cold.
It was completely the opposite for Faith No More, who had the packed house in their hands from the word go, and never let up. This band are about to explode in the US, and the months and months of touring have paid off. FNM are a well-oiled machine, and whether or not Mike Patton ripped off the Chilis' Anthony Kiedis is irrelevant.
This boy moves, and every leap and jerk of his contorting, agile body brings a new rush of adrenalin to the audience. Yes, at times it seems like Patton is a bit disconnected from proceedings, but the rest of his output deserves a break now and then. The set is pretty much the same as the last time they were here: 'From Out Of Nowhere' flashes from the stage like well-placed lightning, setting a pace. We also get a moody 'Edge Of The World' a zippy 'We Care A Lot' the Nestle chocolate theme song (don't know if you get this one in the UK) and, of course,'Epic' which had 2500 would-be rappers pantomiming their favourite moves,
Pizza and Patton flew into the audience, guitarist Jim Martin actually spoke, and it all ended with The Commodores 'Easy'. It's all becoming very easy for these guys. 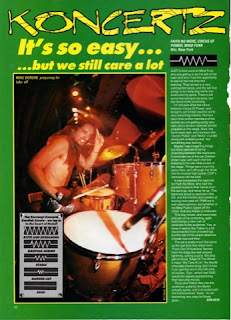