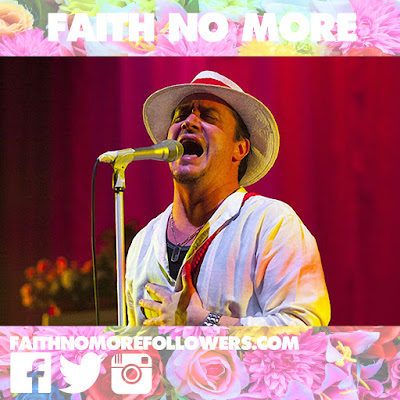 On this day in 2012 Faith No More returned to the UK for two dates to replace their headlining spot at the cancelled Sonisphere Festival.


The first of these dates was at Hammersmith Apollo in London, FNM played at this venue, previously known as Hammersmith Odeon, in 1990 a show which was released on bootleg vinyl.

The 2012 show however was amazing and I was lucky enough to be present. highlights included: the fantastic set list which included a large selection of songs from the We Care A Lot album, the cover of Tom Jones' song Delilah and the presence of non other than 'Trollfoot' more commonly known as actor Danny DeVito. 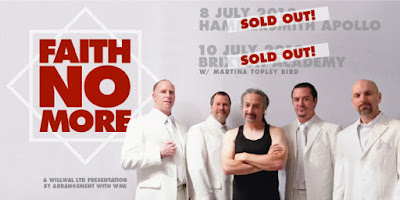 Here is review of the show published in Kerrang magazine.

White - white everywhere. On the microphone stands, the amplifiers and the curtains draped 20 feet from the roof. Even the stage hands are dressed in white. Aside from

the red in the solitary glass of wine, nestled precariously beside a drum kit with the words Faith No More embossed in regal gold type, everything is white. Then comes an unexpected delivery of flowers. Hundreds of them, arranged from one side of the stage to the other, making this not only the most ornate gig of the year but also the nicest smelling. It would have been a special occasion had the San Fran five-piece just come out and played to make up for the cancellation of their planned headline set at Sonisphere. But ever since their reunion in 2009, Faith No More have hardly done things by halves.

Pre-whiteout, the capacity-packed Apollo is treated to the Mike Patton-endorsed sounds of instrumental Italian trio Guano Padano, who do a fine line in spaghetti western-style surf with droning, dream-like passages.

Then just as they slide from intriguing to dull, the slick quiffed Faith No More singer strides on stage to lend his peerless pipes to Prairie Fire, which rouses the audience into life.

Once the stage is transformed, so too is Mr Patton, hobbling with a cane, with his Panama hat-covered head bowed as keyboardist Roddy Bottum delivers the piercing opening notes of Woodpecker From Mars. As the rest of the band assume their positions and the room is filled with a flurry of Billy Gould's none-more springy bass and Mike 'Puffy' Bordin's beats, the frontman calls a halt and launches into a crooning cover of Delilah - the Tom Jones song. He pulls it off with an effortless cool, making it seem like the most natural, obvious thing in the world.

Which sums up the next 90 minutes, really. As Midlife Crisis kicks things up a notch, the iconic frontman circles, hunches and lurches around the stage, attacking every note. The band are flawless too, incredibly tight, whether they're smashing through an incendiary Digging The Grave or kicking it smooth on The Commodores' Easy. An amusing burst of Never Gonna Give You Up by '80s pop goon Rick Astley closes out the set as Mike teases finishing Just A Man, only for everyone to leave the stage, come back as if to encore,

then play its last notes and leave again.

The proper encore proves an old school fan's selection - among whom is the unlikely figure of Danny DeVito, watching from the wings, excitedly taking photos - with the rarely played Greed, We Care A Lot and Why Do You Bother, segueing into Jay-Z's and Kanye West's Niggas In

Paris, finishing things for real. As thrilling as it is to hear the old hits, lesser-played gems, and as fun as shows like this feel, it's almost criminal that three years on. Faith No More remain a live only reformation. Especially, when on this evidence, they still operate at a level above and

beyond most other bands. Some new music next time, chaps? Now that would be something truly special. 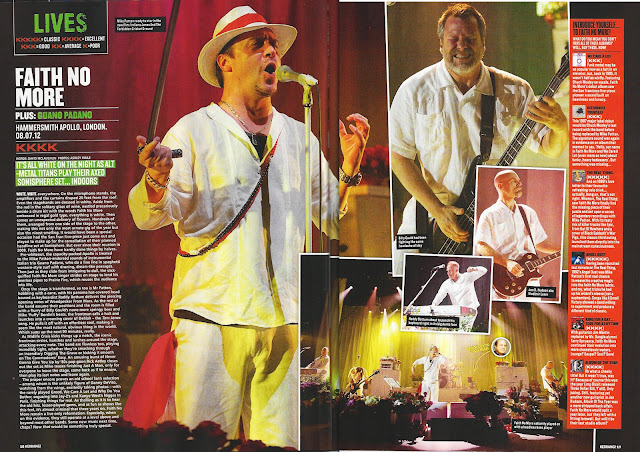 Why Do You Bother / Niggas in Paris 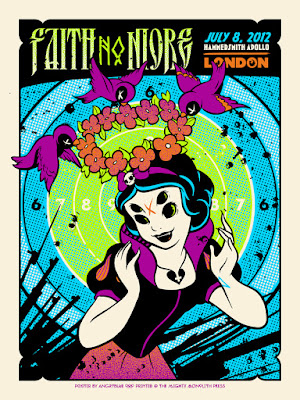