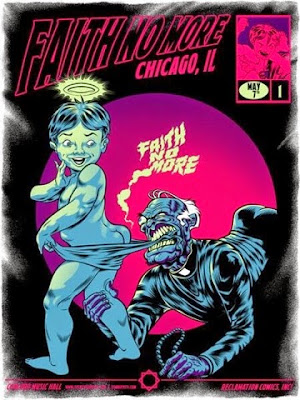 Back on the road with FAITH NO MORE and they come back with just as much passion as we have seen.

This show was at Concord Music Hall in Chicago.

So first off - I'm a long time Faith No More fan - so I really wanted to knock this out of the park. I initially decided I wouldn't go the 'faith' route and do any religious iconography. Of course I also never listen to myself because it's too limiting...Obviously their new album is self produced and they've been vocal in the past about their distaste for the label's pressure and influence. So my starting point was thinking of a way to show their independence and rebirth... I had some grand ideas and then I think I had talked to Zoltron and he was pushing me to reduce reduce reduce.

After that conversation I started down a different path and it hit me as I was turning my focus on another project - The iconic Coppertone girl as a young nubile boy and the scruffy cute dog tugging at her bottom (to see her ass or whatever) as a pedo-priest preying on the youthful lad. It just made me laugh and fit the puzzle I had set up. So then when I was asked to do a diptych I knew I had to have, like a good massage, a happy ending. Ironically I finished these before they released the album artwork and the single Superhero. All of which makes my comic book approach and young boy seem tied-in and intentional! Sometimes shit just falls in line ;) 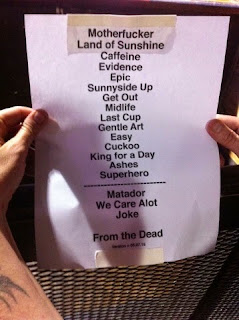 Mike Patton sang into a microphone last night. He also sang into a repurposed police radio, complete with coiled black chord, and a red megaphone with a microphone seemingly built in. Sometimes he would hold his normal microphone up to the mic-equipped megaphone, screaming and screaming through layers of amplification. He had a small effects rig set up on a white music stand near the front of the stage, and he’d tweak pedals on his voice the way a guitarist would. The voice is an instrument, of course, but few people play it like Patton.
Patton can do death metal growls, and he did; he can croon and shriek and bellow from the bottom of his gut, and he did. He has one of the most elastic voices in American music. Dressed in all white with a string of red beads, he pounced around the stage with his longtime bandmates. He’s the kind of frontman who’s more interested in amusing and being amused by his audience.

He hissed, wailed, screamed, rapped, squealed, taunted and cackled. Embracing satire, indignation and complacency, he played fast-talking auctioneer, high-pressure pitchman, bullhorn-wielding preacher and jargon-spewing carnie. Patton contorted syllables and distorted tones without the aid of filters, animating characters seemingly afflicted by bouts of schizophrenia, sadness and shock. It's a wonder he didn't blow out his throat.

This was also the point we realized all of this was actually possible because the band actually seems to be enjoying themselves. The new album works because Faith No More is making music together again because they want to, and no other reason. As Patton stomped around the stage giddily singing "We Care A Lot" during the encore he was positively beaming. And his bandmates we're beaming right alongside him. Who knows how long the band will be together this time? But we know that they'll only stay together if they want to.Oh, and if you missed them last night Patton left the stage shouting "See you in September!" Which leads us to believe there's a pretty good chance they'll be playing a certain local music festival. Get excited.