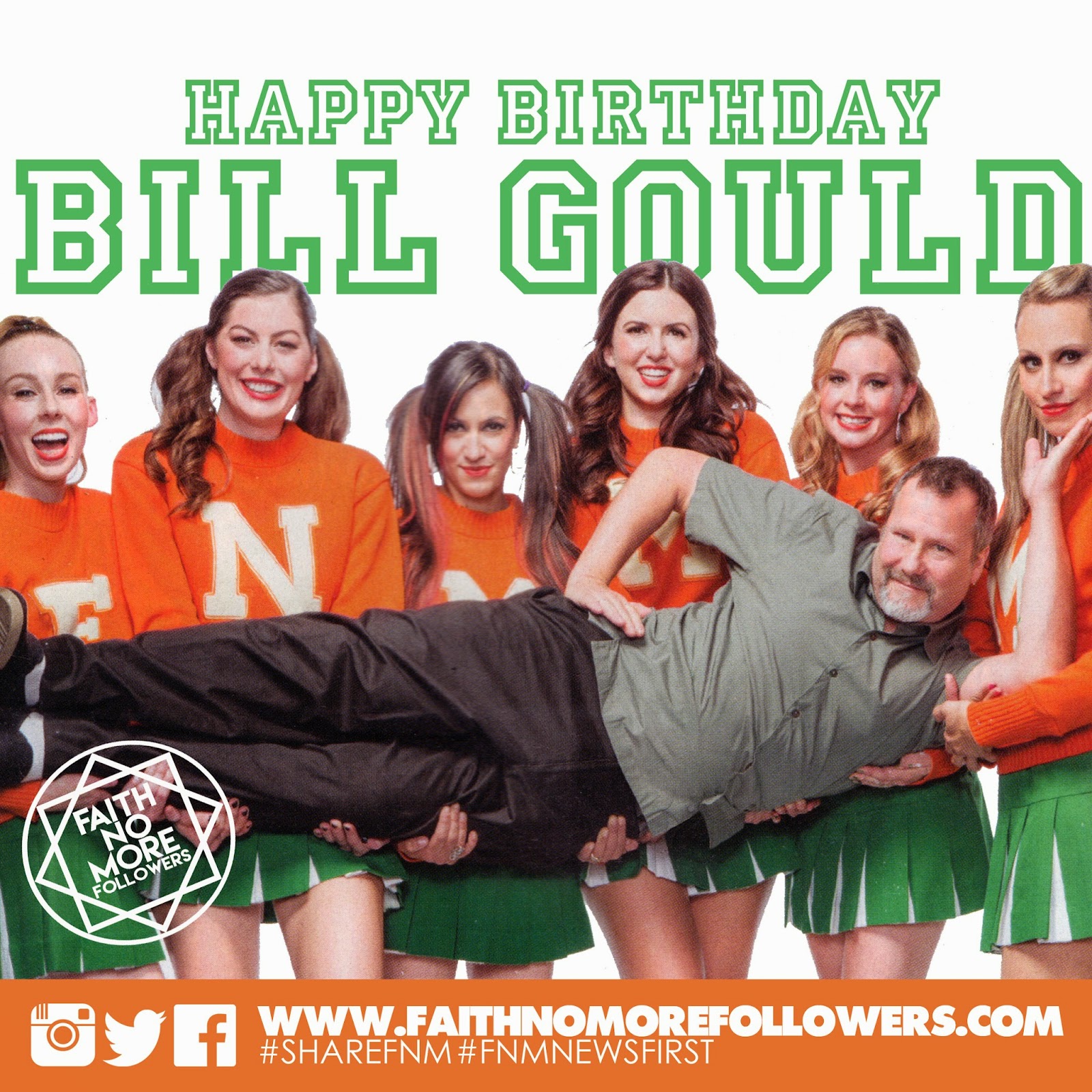 
Faith No More Followers team would personally like to thank Bill for all his help, he is always ready to answer our 'fan boy' questions and, when his memory serves him right, help with facts for us to post. He has been a fantastic support to our work and that of other fan pages. Thank you.

Please join us in wishing him a very happy birthday, and enjoy our tribute to Guero Sin Fe!!

Here is an in depth interview will Bill featured in issue 96 of Bass Guitar Magazine in 2013, reposted here with the kind permission of author Joel McIver. 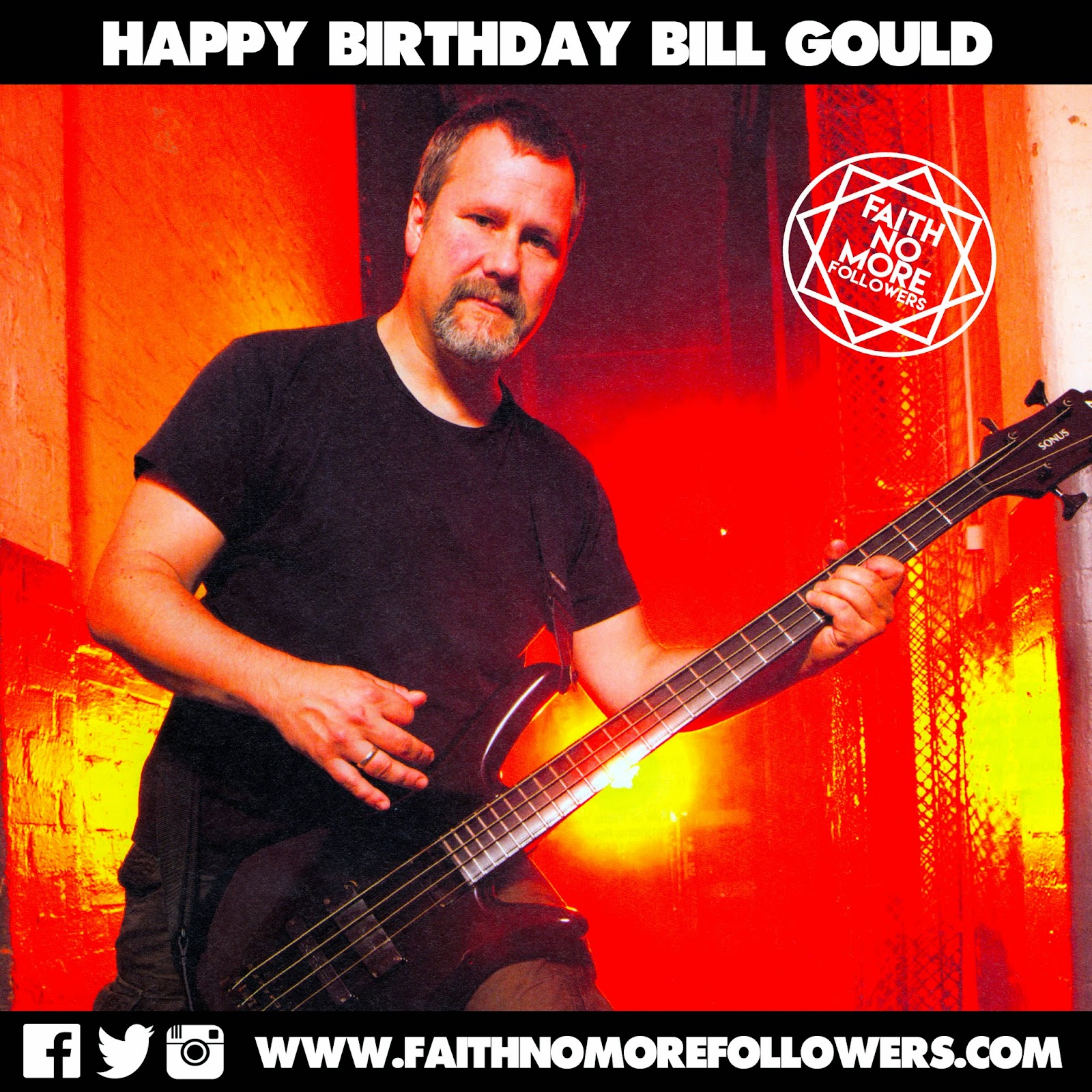 You Gotta Have Faith
By Joel McIver
Photos by Tina K

Billy Gould of Faith No More slaps. He picks. He uses his fingers. He plays bass like no-one else. Heavens above, is there nothing the man can’t do, asks FNM fanboy-in-chief Joel McIver.
If you’d told me, as a pustule-covered kid with a mullet in 1986, that one day I’d be on stage before a Faith No More concert, asking Billy Gould about his new Zon Sonus BG4, I’d never have believed you. And yet that is exactly what is happening, a mere 26 years later. Damn, I love this job.
​“These are active,” says Gould, gesturing to the Sonus he’s holding on stage at the Brixton Academy in London. “Passives are really cool, but for my purposes actives are better,” he adds.
​This makes sense. As you’ll know if you’ve been paying attention to Faith No More’s career over the last three decades or so, Gould has an unusual bass style, composed mostly of beating his instrument into submission while leavening the violence with some pretty exquisite fills and rests. This means that his signature Zon, developed in the last two years, needs to be built to take the punishment.
​“It’s taken a lot of abuse,” sniggers Gould, “and there’s a tiny bit of rust, but that’s it. It’ll last me my lifetime, that’s for sure. Look at what great shape it’s in, I haven’t had lots of things done to it: it’s just built really well. There’s only one knob on it, so the tone is actually in the pickups.”
​As a high-profile bassist since FNM’s first major-selling album, The Real Thing (1989), it’s a bit odd that Gould hasn’t had a signature bass until now. He shrugs, “I’d known Joe for years but I’d never thought about a signature bass. Eventually, though, I guess people had asked him about the kind of basses that I play because my tone is kinda unique, so he said ‘We should just make a bass that you can get in on,’ and I said ‘That would be really cool’.”
​The Brazilian rosewood-bodied BG4 is accompanied by a BG5, although Gould himself isn’t a fan of five-strings (“I don’t like them, because I can’t dig in there and be physical”) and indeed any string configuration more than the usual four (“I can never see myself doing that unless it would be for a special tone on a record or something”). Its graphite neck ties in with his priorities – simplicity and reliability – because he knows it will play the same every night. As he recalls, “The great thing about the graphite necks is that you can fly, take them on a plane and the bridge will be exactly like it was at the last gig. I had Aria Pro IIs before these, which were cool. Cliff Burton [of Metallica] introduced me to those and I loved them, but if it was a sweaty night, the neck would be totally fucked. If it’s cold, it’s totally different. So I was never happy!”
​Take a look at Gould’s amp, swathed in white sheeting as part of Faith No More’s elaborate production and anonymous as a result, and you’ll see a mysterious box atop it. “I’ve just got a tuner, there’s no effects, but I do have this unit here,” he explains “The idea with this is that the more strength you put into the strings, the more overdrive you get, and the more you hold back, the more you get a cleaner tone. It has to do with your personal dynamic. After a while, it’s like driving a car: you figure out where its strong parts are. The tone is where it should be. Sure, the way I play is very unconventional: it’s not the proper way to do it, but it’s the way I learned!” On which note, why not accompany us back to the FNM dressing-room to find out how it all happened? 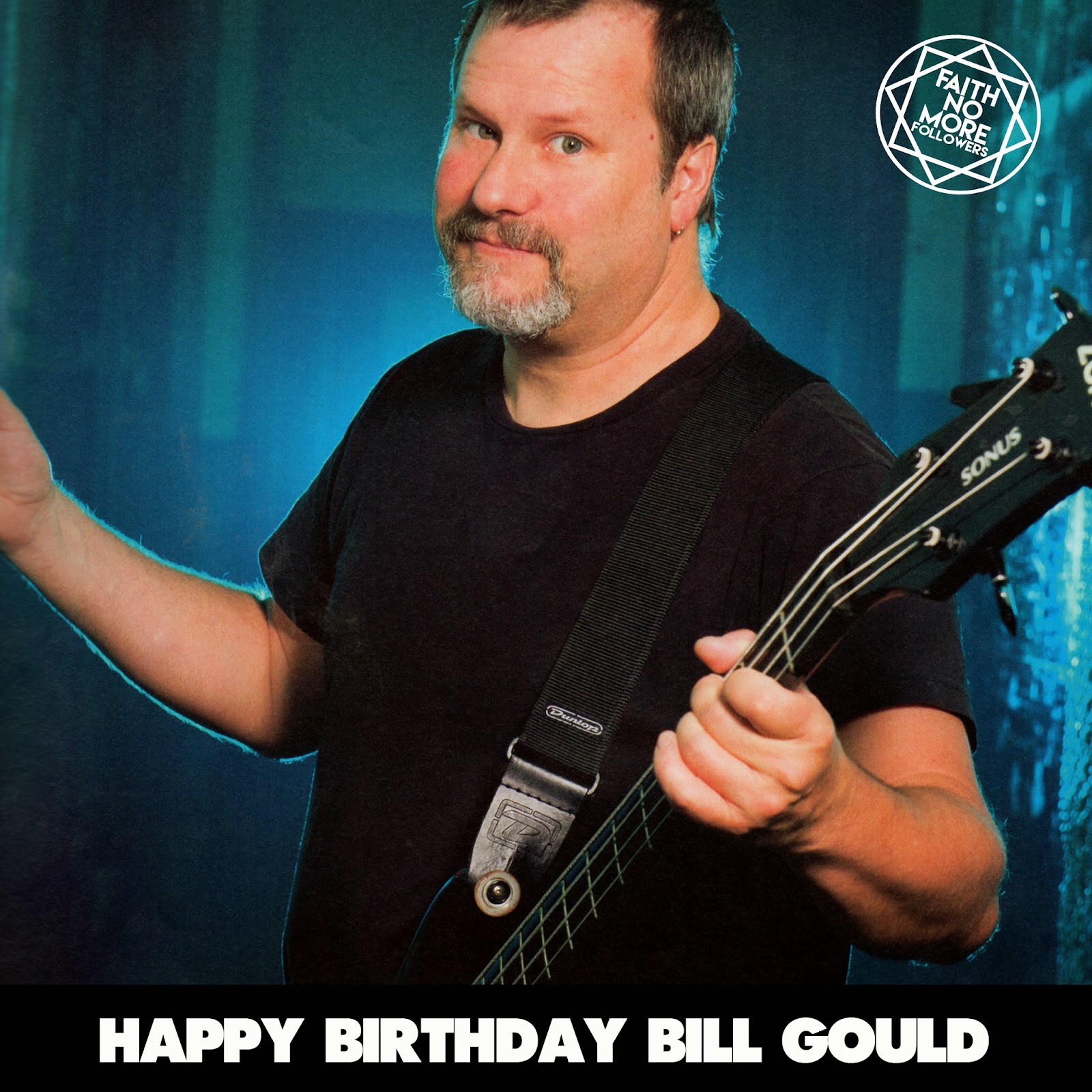 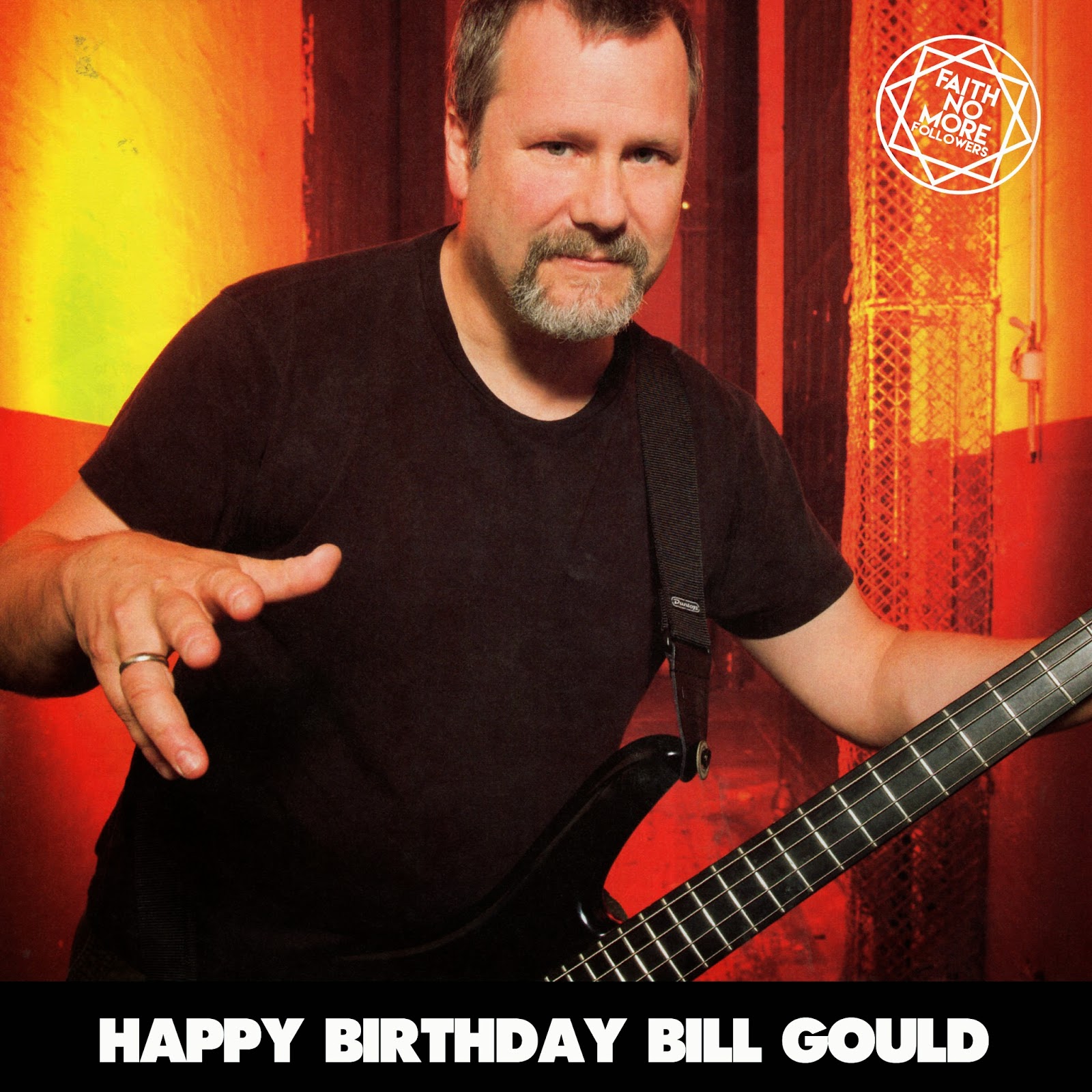 You can subscribe to Bass Guitar Magazine or buy the latest issue HERE. 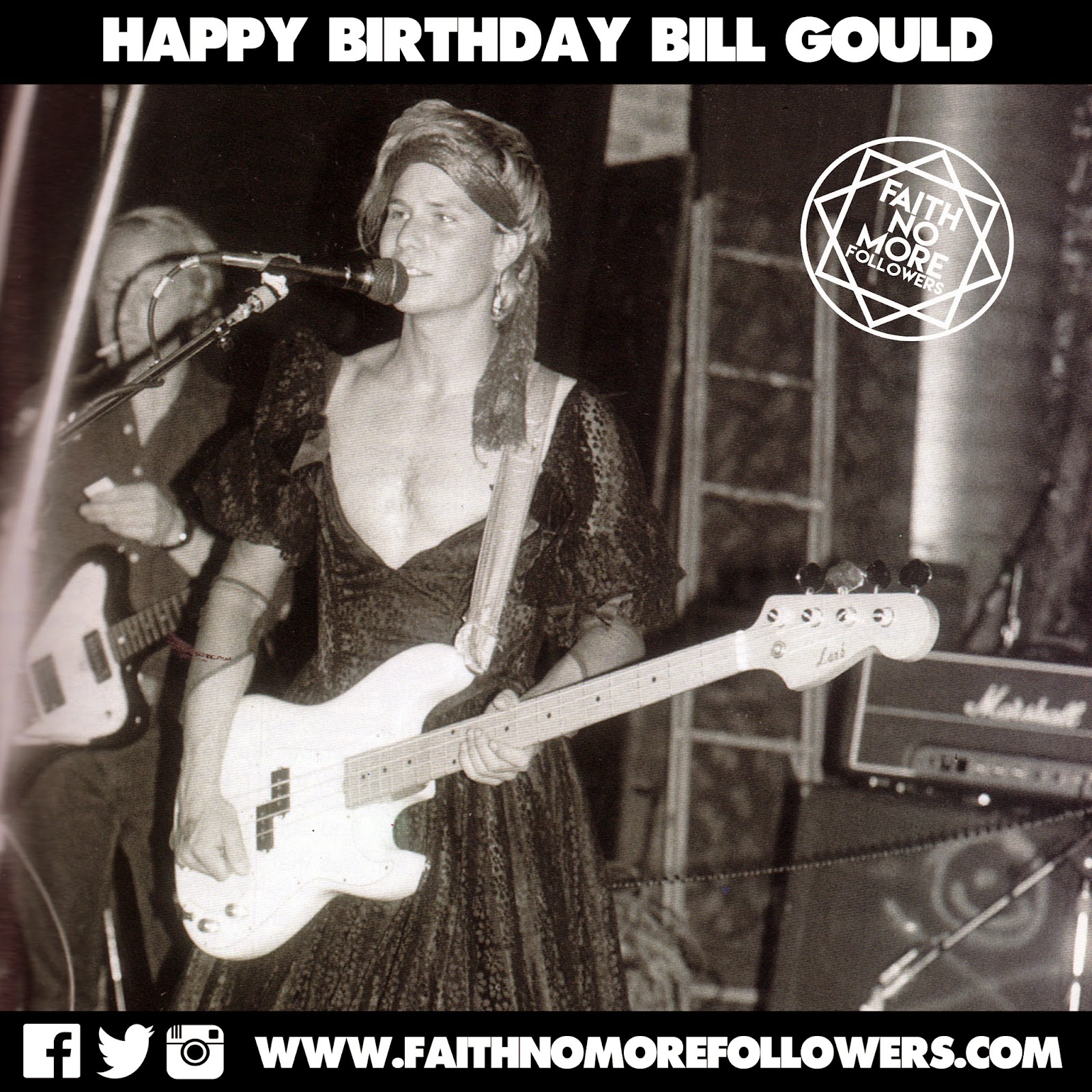 As an added bonus what follows is an interview by Joel McIver that featured in Terrorizer Magazine in 2009.


YOU GOTTA HAVE FAITH
Sometime Faith No More bass player Billy Gould faces up to the Terrorizer Q&A. Popping the questions: Joel McIver
Is nu-metal your fault?
(laughs) Well, it’s kind of interesting. When we split up in 1998 there was this wave of nu-metal bands that used us as an influence. But the thing is, I don’t make the connection. There are loads of other bands — like Flatbush out of LA — who sound much more like us than the Limp Bizkits and the Korns.
How are relationships between the FNM band-members these days?
Hmm. Not that bad, actually. Let’s see: I went to Puffy’s 40th birthday a couple of weeks ago. I talked to Roddy at the party, too. I’ve seen Jim a couple of times at shows. I respect him, I think we respect each other. I haven’t seen Mike Patton for a couple of years.
Did you hear the stuff he did with the Dillinger Escape Plan?
Yes, I liked it. I thought it was really good. He works hard.
How did it feel to be called a ‘funk-metal’ band in the late 1980s?
It was so funny, because I don’t think we really wanted to be funk-metal. It was just that rock music back then didn’t really swing. We were just missing the groove.
Why did FNM’s career slide after the Angel Dustalbum (1992)?
It was MTV and the radio that really made us sell those records. That was something we really had no control over. So we realised that we should just keep doing what we were doing — whether things worked or not was out of our hands.
Whose idea was it to cover ‘Easy’?
At the time we were doing ‘War Pigs’ and touring with Metallica, and we felt like we were being packaged into something we weren’t. We were at a bar and we had a few drinks, and when ‘Easy’ came on we looked at each other and said, that’s it! This’ll get us out of this mess (laughs). Ironically enough, it was probably the biggest hit we ever had in Europe. It was so surreal. You look at it and you think, who the fuck knows why things go as they go.
FNM was the support act on the Metallica/Guns N’Roses tour in 1992, which was famously a disaster because those two main bands hated each other. What was it like?
It was like working a shitty job. Axl Rose had an army of lawyers and nobody was gonna do any direct confrontation with anybody else. When you get into the big stadium rock shows, there’s a lot of organisation and a lot of people get in the way between the artist and the audience. On paper, this tour looked like the greatest opportunity in the world, to play in front of millions of people. But actually, it dragged on for like four or five months, and it was tough on our heads because we had been playing clubs before that. It was like working for a big corporation.
Courtney Love was in FNM for a while. Why?
We had a really hard time finding a singer and thought she would be really good. When we played a show and there was only five people in the audience, she’d make sure they were all paying attention to her. I’ve done some crazy shit with her and it was really a lot of fun.
Why was Jim Martin fired?
I came from a punk background, and he was from a metal background. After a while, people get tired of compromising with each other. Actually this is probably the reason the group finally split in 1998: if you look at the direction everyone’s gone in since then, it’s so wildly different, and you can see that this was inside of people but it couldn’t get expressed.
What would it take to get you guys to re-form?
If someone said, will you do it for a certain sum of money, it would make me want to do it even less. I think it would take us to bump into each other somewhere, be in a good mood and have a nice evening together and just say, why don’t we fuckin’ do something? That would be the bext reason to do it. But rather than become a covers band of ourselves, I’d rather just leave the band dead.Money’s great and all that shit, but it’s my life too.
Do you know that there’s a whole fanbase out there, dying for you guys to re-form?
(regretfully) Yes, I know. It’s tough. It was really hard for me when we first split up because I felt like this was a big family we had. We had a lot of intelligent kids who had a lot of creative energy, and they made the whole experience better. But what can you do? It’s kinda the way life goes.
Here’s the million-dollar question. Did you sellout?
Well, I guess we did and we didn’t, right? We sold a lot of records and we had the radio hit. We really put a lot of effort in. Maybe too much effort. Maybe we second-guessed ourselves a little bit, to try and keep our intentions pure.