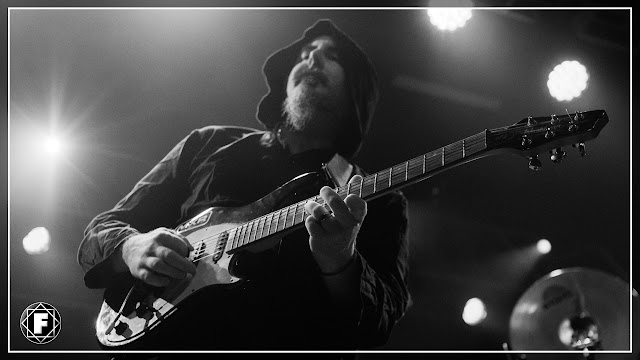 Kronos Quartet have finally released recordings of Séraphîta, the score composed by Trey Spruance as part of the 50 for the Future initiative.
Trey revealed details to us on this partnership last Halloween. Full Interview HERE

"....they commissioned me as part of their ongoing “50 for the Future” initiative, which showcases 10 composers a year for five years, each composer contributing a piece that not only will Kronos play and record, but also publish as a “learning repertoire” for contemporary and future string quartets to have easy access to, as a kind of songbook. All the composers they work with vary wildly, so part of the idea is to get ensembles used to approaching a broad plethora of techniques and approaches to the quartet. It was certainly an honor to have been approached by them! Since when I work with orchestral instruments I usually work either with great masses of ensemble sound, or with a soloist, I don’t consider myself as much of a string quartet composer. That is a very special kind of ensemble, both in the details reflected in the traditional repertoire, and in the rigors of that kind of ensemble playing, which is just as particular and demanding in contemporary music. It’s really a very very deep world. And Kronos of course is at the forefront of it. At first I was worried about if I’d have artistic clarity… I took it very seriously, listening to my favorite quartets, following scores, worrying about how to choose the best approaches to the instruments for a lot of vague ideas I had. But then, all of a sudden, the real ideas came all at once, and they were really very strong. They seized me. That’s always a good sign. The problem then was how to make those ideas work -- how to translate them into string quartet land. And that really was a challenge. I don’t really know if I succeeded! It’s funny, my strength as a musician is definitely in arranging and orchestration, and I slaved over this piece. Moreover I feel really good about it musically and artistically. But honestly it remains to be seen whether it actually translates as a string quartet. One thing is for sure: Kronos is the group to find out. I learned so much from doing it’s been a priceless experience."

“Séraphîta sets its roots in the work of three Eranos-era colleagues: Henry Corbin, Mircea Eliade, and Gershom Scholem. The quartet is a meditation on a specific complex of works bound together by the common interest of these three colleagues, and its raison d’être is in the overarching theme common to all the works. Concrete historical links and associations exist between all of the elements drawn together by the piece, and these give the impression of a very specific inter-textual hermeneutic going on behind the scenes. Due to the broad aperture required, things of this nature resist quick unveiling in open and direct language, so perhaps the musical means of approaching the subject is all the more apropos.

“The primary work in the canon is Honoré de Balzac’s metaphysic prose Séraphîta (1834), namesake of Movements I and III. Also directly referenced is Pierre Klossowski’s Le Baphomet (Movement II). As a binding agent, mention must also be made of “the Prologue in Heaven” from Goethe’s Faust. Eliade never finished his proposed book on Balzac and Séraphîta, but did complete his study Méphistophélès et l'Androgyne. Corbin, who writes at length on Goethe, and on Méphistophélès in Ahrimanic terms in particular, referenced Balzac’s Séraphîta often, and wrote of Méphistophélès and Séraphîta together in his Configuration of the Temple of the Ka’aba. Corbin and Eliade were both personally acquainted with Klossowski, who publicly praised their works.

“Movement I, ‘Séraphîta,’ is based on the apparition of an angel/androgyne in Balzac’s novel. The character Wilfred perceives the semi-divine Swedenborgian entity as his gendered female daēnā and falls into an agitated state of otherworldly yearning. In the quartet we hear Séraphîta’s answer to Wilfred’s tragically obsessive, misplaced, romantic, and ultimately unconsummatable human love. Her solemn theme travels downward through the angelic hierarchies, acquiring more mass as it descends through a series of conjunct and disjunct tetrachords & time dilations. Her trajectory terminates in an earthy dirge, recapitulating the by-now familiar theme in graven tones.

“Movement II is an ‘Arabesque’ in the strict sense of the word. The content is derived from a method I call ‘Tessellation,’ a rhythmic/melodic pattern permuting in this case in quarter turns. As with tessellation tile work, the ears might hear patterns like the eyes register a tile array. A listener studiously following one of many nodal paths in a larger network of superimposed rhythmic arrays will eventually find themselves hearing everything else ‘upside-down.’ The conjunct and disjunct tetrachords from Movement I are revisited, only now in a more ‘modal’ form, with expansions and modifications of the original theme.

“The piece finishes with a mirroring of polarities in Movement III. ‘Séraphîtüs’ appears to Balzac’s female character Minna, who perceives the identical entity as her gendered male daēnā. Musically there’s an echo of courtly medieval dance forms, referring to none of them specifically. It’s fitting to take a cue from Lou Harrison’s Estampie and use the cello as a drum. The two main motifs here play off each other in a tension between the zest of the less formal aspect of dance, against the ‘over-determination’ of dance in more formal courtly forms.”